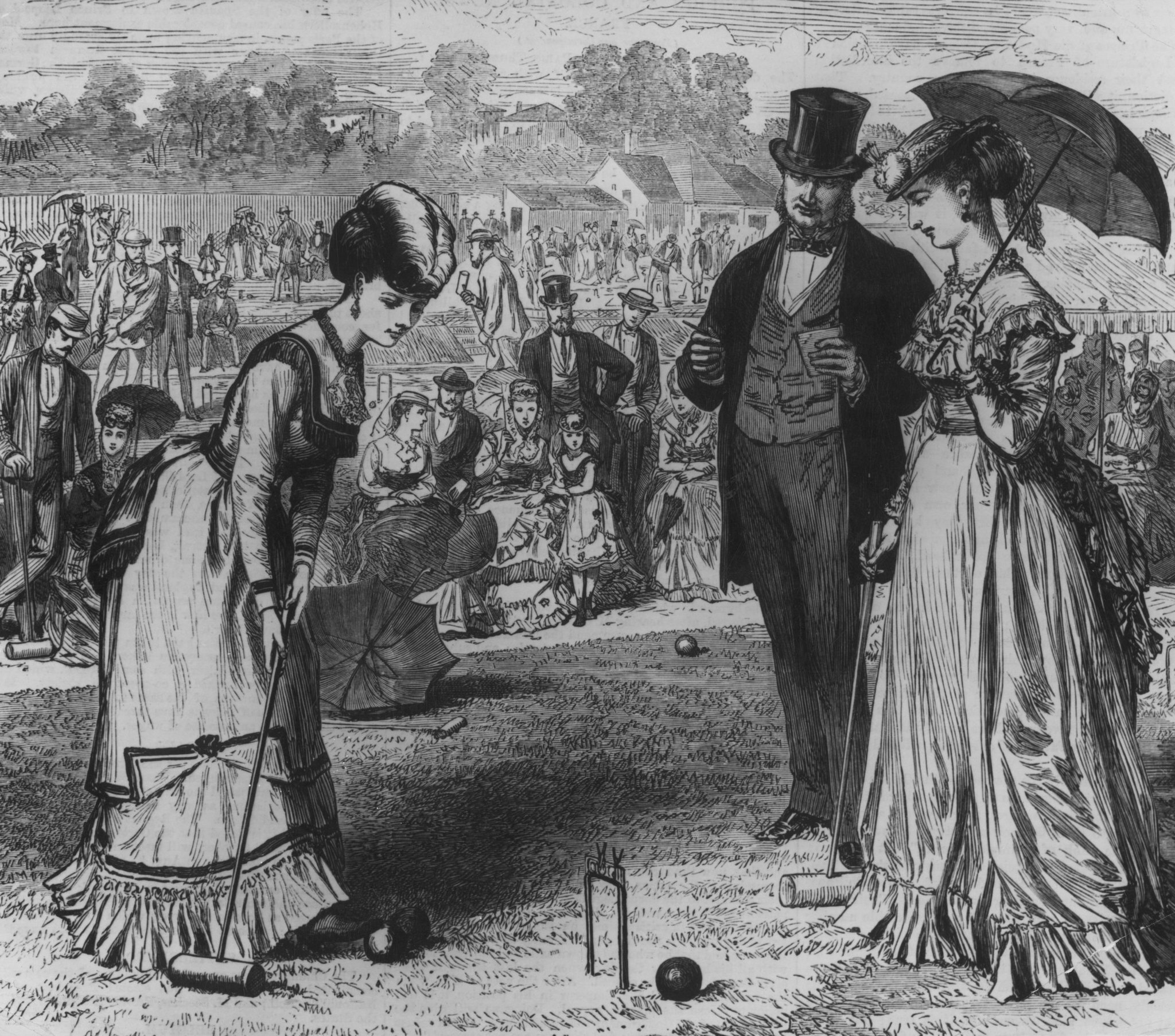 The origin of croquet is unknown. Although the game has been played in roughly its present form for about one hundred years, its antecedents extend back many centuries.

As long ago as the fourteenth century, peasants in Brittany and Southern France amused themselves playing a game called Paille Maille, in which crude mallets were used to knock balls through hoops made of bent willow branches. This ancestral version of croquet persisted, and by the seventeenth century, Pele Mele, as it was called in England, had become popular with Charles II and his court. Diarist Samuel Pepys, in his entry of April 2, 1661, wrote that “I went into St. James Parke, where I saw the Duke of Yorke playing at Pesle Mesle – the first time that I ever saw that sport.” Pall Mall, as the game came finally to be called, was played with a curved club, a wooden ball, and two hoops.

In 1852 or 1853, croquet was introduced into England from Ireland, where a game called crooky, which used mallets and ball similar to the modern ones, had been played near Dublin since the 1830’s. No one knows how the game reached Ireland, although it has been suggested that it was introduced by French nuns or by French refugees.

What does Croquet mean?

According to the Oxford English Dictionary, the word “croquet” is a form of the word croche, an old North French word used to mean “shepherd’s crook”. The word is found in more modem French dialects, where it is used to mean ‘hockey stock’.

Although most agree that croquet’s origin is French, it has been proposed by A.G. Ross that the game was actually born in Ireland. He claims that “croquet” came from the Irish word cluiche, which means ‘play’, and is pronounced roughly like ‘crooky’. According to Ross, the phrase “to take croquet” might be a translation of the Irish ‘gabail do cluiche’ which means to take to playing, or to begin to play.

Croquet was introduced into England from Ireland in the early 1850’s by one Mr. Spratt, who had been given a set of croquet implements by Miss McNaughten around 1840. Miss McNaughten informed Mr. Spratt that the game had been introduced into Ireland but that she had seen it in its primitive state in either Southern France or Italy. The crude and rustic game observed by Miss McNaughten was played with hoops made of willow rods. The villagers constructed the mallets by boring a hole in a hard, knotty piece of wood and inserting a broomstick for the handle.

Mr. Spratt kept the croquet equipment for several years before selling it to Mr. Jaques, an enterprising young man, whose family is the foremost manufacturer of croquet equipment today. It was Mr. Jaques who brought the game to notice. Incidentally, the unfortunate Miss McNaughten perished in a fire soon after giving the equipment to Mr. Spratt.

By 1865, croquet had achieved wide acceptance and had spread throughout England and its colonies. One gentleman of the time, noting in a letter to a friend that the game was introduced into India “during the hot weather of 1864 at Simla,” observed that “the Viceroy played with an entire mallet of ivory-as became his position.”

During these early days of popularity in England, croquet was primarily an after-dinner recreation. It was played with ten large hoops, two pegs, and odd-sized mallets, on a lawn that measured fifty by thirty yards. The game was played as a sequence game, which meant that the turns and the balls were played sequentially according to the color of the ball. It is usually still played this way in the United States, though in Great Britain, in singles, while the turns alternate, the balls may be played in any order.

Croquet’s great popularity in England continued through the 1860’s and into the 1870’s. In 1861, Routledge’s Handbook of Croquet appeared. This book, probably the sport’s first rule book, still basically governs the game today.

Another important and influential publication of the time was Croquet: A Treatise and Commentary, by Captain Mayne Reid, a hero of the Mexican War and the author of several books for boys. Captain Reid, whose book appeared in England in 1863 and in New York in 1869, saw croquet as a healthy, and presumably safer, substitute for war, and warned his readers of the dangers of encountering women on the croquet court.

The 1860’s also saw the appearance of the game’s first recorded champions. In 1867 Walter Jones-Whitmore won a tournament at Evesham and became, according to some, croquet’s first champion. Jones-Whitmore was also the first to attempt to devise a system of strategy and tactics, which he published in a book called Croquet Tactics in 1868.

One year after Jones-Whitmore’s victory at Evesham, Walter Peel, one of the major figures in the history of croquet, became the game’s first true champion, and by 1869, the All-England Croquet Club was founded at Wimbledon. When Peel won his championship, the hoops were six inches wide, five inches wide for the final two rounds.

In the game’s early days, the hoops had been as wide as eight inches, but they were gradually reduced in size to four inches by 1872. Early in the 1870’s lawn tennis was introduced in England, and, for a while, the controversy over which was the best game, tennis, or croquet, became quite intense. Soon, however, lawn tennis eclipsed croquet in popularity, and English croquet entered a period of decline that lasted through the 1880’s.

Croquet arrives in the United States

Croquet was introduced to the United States in the early 1870’s. The sport was first taken up by high society in the New York area, but it soon achieved general popularity throughout the country. Lawn tennis was introduced here at about the same time, but from the 1870’s through the 1890’s, croquet enthusiasts far outnumbered the tennis players. A croquet set was mandatory equipment for every estate, and civic leaders provided sets for public parks, which previously had not had facilities for any sport played on grass. Croquet was quite popular with women and was one of the first games played in the United States by both sexes.

By late 1870’s lawn tennis suddenly surged in popularity, and croquet enthusiasm began to wane. The ebb in croquet’s popularity was due, in part, to the game’s surprisingly unsavory reputation. It had become associated with gambling, drinking, and philandering to such an extent that it was banned in Boston by one Reverend Skinner, and several articles of the time called upon both clergy and laity to suppress “the immoral practice of croquet.”