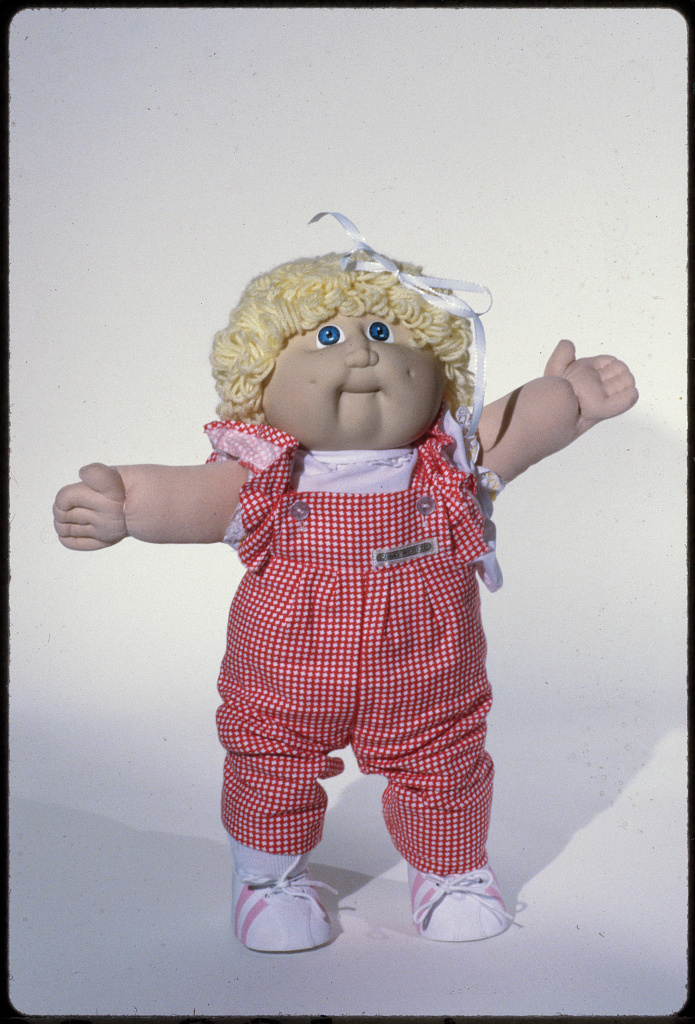 It was 1979 when Xavier Roberts and five of his friends developed the Little People Originals dolls, a loveable but odd-looking children’s toy that would soon become known as the Cabbage Patch Kids.

Roberts, a sculptor from Georgia with a love for sculpting and quilting, was the manager of a craft store. Working part-time to put himself through college, he stumbled across a grand idea, a new way to market his dolls that would very quickly make him rich beyond his wildest dreams.  Innovative marketing drove rapidly rising sales prompting a move to rebrand the dolls and partner with a large toy firm, all of which led to one of the largest fads of the 1980’s.

At 21 years of age, Xavier Roberts opened the Babyland General Hospital in Cleveland, Georgia, and sold a line of dolls called the Little People Originals.

At Babyland General Hospital, kids could adopt a “baby” (the Little People Originals were never called “dolls”). The Little People Originals were displayed in a store built to resemble a maternity ward. Salespeople dressed in maternity ward outfits. The dolls were not sold but rather, were adopted, and came complete with adoption papers and a birth certificate. Each prospective “parent” was required to raise their right hand and vow undying love for their newly adopted baby.

The dolls were constructed of cloth heads and bodies with very round faces (almost lumpy looking) and soft, pudgy arms. The eyes were close set with a head of hair made from yarn. Each doll was purposely a bit different making each newly adopted Little People Original unique to each child that purchased one. They sold for $40 each.

The dolls were first sold at craft shows. As their popularity grew, Xavier Roberts incorporated his business as Original Appalachian Artworks, Inc. and Roberts and his five friends began producing the dolls on a larger scale. By 1982, Roberts and his friends knew they had a huge hit on their hands. The group hired Schlaifer Nance and Company as the exclusive worldwide licensing agency and to work on rebranding the new product.

Schlaifer Nance and Company president Roger Schlaifer rebranded the Little People Originals as “Cabbage Patch Kids” and he and his wife Susanne Nance wrote the original “The Legend of the Cabbage Patch Kids” story that was included with each doll that was sold. By 1983, the dolls had been covered in Newsweek, The Wall Street Journal, and the Atlanta Weekly.

With demand surging, Schlaifer Nance and Company licensed the rights to produce the Cabbage Patch Kids dolls to Coleco in August of 1982. The dolls were introduced with great fanfare ant the International Toy Fair in New York City. Shortly thereafter, the dolls appeared on the cover of Newsweek. Mass production of the dolls began in earnest in 1983 in a factory in Amsterdam, New York. With efficient production, the cost of the dolls dropped to $25 each and the first doll, Hailey Theeuwen, rolled off the production line.

The Coleco Cabbage Patch Kids had large, round vinyl plastic heads (the original Little People Originals had cloth heads) and soft fabric bodies. Each came with a unique name, birthday, adoption papers, and birth certificate. Provided by a random computer-generated algorithm, each doll was truly unique. Upon purchase, the child would send the adoption papers back to Coleco and one year later, on the doll’s birthday, Coleco would send a birthday card to the doll. By early 1984, sales for Cabbage Patch Kids branded products, from the dolls themselves to clothing apparel, reached a record setting $2 million mark and the dolls shot off the store shelves.

During the peak of the fad, Coleco could not produce the dolls fast enough to satisfy demand. The dolls were hard to find at a time when every parent had to have one for their beloved kids. Pandemonium erupted. Two disc jockeys in Milwaukee wisecracked that a load of the dolls would be dropped from a B-29 bomber to people who held up catcher’s mitts and American Express cards. Two dozen believers turned up at County Stadium, braving a wind-chill factor of -2° F, in the hope of catching one of the prized dolls.

Demand being high, profiteers and collectors grabbed the dolls off store shelves and sought to resell them through newspaper and magazine ads at outrageous markups. Fights erupted in stores as frantic parents fought to secure one of the prized Cabbage Patch Kids dolls for their children.

Soon, riots were occurring in stores across the country. Hills Department Store in Charleston, West Virginian Manager Scott Belcher could provide no explanation for the riots that were occurring in his store. He could only describe a Christmas crowd becoming a Christmas mob: “They knocked over the display table. People were grabbing at each other, pushing and shoving. It got ugly.”

As a result of the violence, police were called in to control the unruly crowds. In Zayre store in Wilkes-Barre, Pennsylvania, a crowd of one thousand people turned violent after waiting eight hours for a chance to purchase one of the dolls. The department manager armed himself with a baseball bat to defend his position behind the sales counter. One woman was crushed in the crowd, breaking her leg.

Some stores began holding lotteries in an attempt to fairly distribute the dolls and avoid the riot-like scenes. As one shopper related:

“When the mass produced ones came out, my Grandmother wanted one. She REALLY wanted one. But as soon as they hit the stores *whoosh* they were gone. So my Grandfather found out the K-Mart down the street was going to get a shipment of them, got up in the middle of the night and sat outside the doors to wait. By morning, there were over a hundred women with him, also waiting for the dolls. (His recollections of what happened are told by him in the same awed hush that a soldier recounts a battle.) The doors opened and he was carried into the store by the mad rush of crazed women, fighting, screaming, clawing, scratching – all to get the coveted Cabbage Patch Doll. Dolls were literally flying overhead as the women were screaming that they wanted a blonde, or blue eyes, or a redhead. Fights broke out as 2 or more women all wanted the exact same doll. He survived, bruised but still intact, and did manage to get Grandmother her doll – and swore that he’d NEVER do that again. Not in a million years.”

By 1985, Coleco saw sales of over $600 million, but by 1986, the fad began losing steam and sales fell to $250 million. Scalpers were caught with large inventories of dolls that nobody wanted to buy. Coleco attempted to remarket the dolls with gimmicks such as talking dolls and dolls that played kazoos.

In 1986, Original Appalachian Artworks bought back the licensing rights for Cabbage Patch Kids from Schlaifer Nance & Company. During this same time, Coleco had several other product lines fail and were forced to file for bankruptcy.

Cabbage Patch Kids Move to Hasbro and Beyond

After Coleco’s bankruptcy, the Hasbro toy company took over the rights to produce the Cabbage Patch Kids dolls and began marketing them to younger aged children. The sizes of the dolls were reduced but sales continued to stay level. Their legacy continued though and in 1992, Cabbage Patch Kids were named the official mascot of the 1992 US Olympic team. Regardless, Hasbro never truly revitalized the failing fad.

In 1994, Mattel acquired the rights to produce the dolls. Mattel expanded the line and began producing Cabbage Patch Kids dolls made entirely of vinyl plastic. The dolls shrunk further to 14 inches (the original dolls were 16 inches) and additional gimmicks were introduced. Dolls that swam, ate, and brushed their teeth were rolled to the market. Later, period type dolls that were the full 16 inches, were introduced.

By 2004, ownership was again turned over when Play Along Toys took ownership of Cabbage Patch Kids from Toys “R” Us.