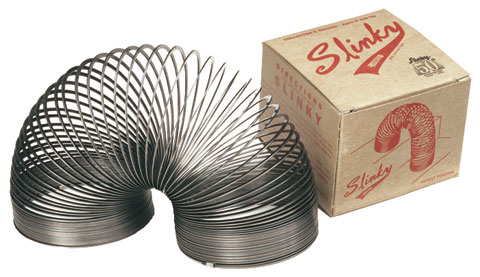 The Slinky or “Lazy Spring” toy has mesmerized children since the mid 1940’s. The helical spring toy stretches and then reforms itself using gravity and its own momentum. In its first sixty years, the Slinky company, led by Betty James of Philadelphia, sold over three hundred million units making the Slinky one of the most successful and highest selling toys of all time.

The invention of the Slinky

In 1943, Richard James, a naval engineer stationed at the William Cramp and Sons Shipyards in Philadelphia, was tasked with developing responsive springs that could stabilize sensitive instruments aboard rough seas. While working on his springs project, he accidentally knocked one of the torsion springs off his workbench. Impressed and intrigued by the simplicity of it, he marveled as he watched the spring walk, end over end, across the floor. James’ wife Betty later recalled, “He came home and said, I think if I got the right property of steel and the right tension, I could make it walk.”

Initially Betty James was not so sure until she noticed neighborhood kids’ fascination with the experimental toy. The sound it made when it expanded and contracted prompted a dictionary search where she found the Swedish based word “slinky” meaning sleek and graceful. She felt the name aptly fit the toy and dubbed it Slinky.

James experimented with several types of steel wires, lengths, coil compressions, and weight to find a spring that would recoil to reform its shape but remain flexible enough to “walk”. Finally, satisfied he had found the right wire and design, they took out a $500 loan and formed James Industries. Four hundred Slinkys were made by a local machine shop. Each Slinky was 2 ½ inches tall and contained ninety-eight coils of high-grade blue-black Swedish steel. The Slinkys were hand wrapped in yellow paper and priced at $1 apiece.

The birth of the Slinky craze

After having little luck trying to sell the toy in retailers throughout Philadelphia, the James’ approached the Gimbels Department Store in Philadelphia and were granted permission to sell the toy at the height of the Christmas holiday season. On a blistery, snowy day, James set up an inclined board to demonstrate the toy’s ability to walk end-over-end. Afraid that the toy would not sell because it was too simple, he gave a $1 to a neighbor and asked that he buy the first one. Within 90 minutes all four hundred Slinky units had been sold. James knew they had a hit toy on their hands and set out to mass produce the toy.

James quit his mechanical engineering job and went to work full-time on his new business venture. He invented a machine that could mass produce Slinky toys, creating each slinky in less than 10 seconds. The Slinky was packaged in a red lettered cardboard box. James promoted the toy heavily, especially on television shows. Betty James created a unique advertising plan, aided by the production of a “jingle” that is still the sound behind modern day Slinky television commercials (see the Slinky jingle below). Within two years he had sold over one hundred million Slinkys.

James continued to roll out new and improved Slinky based toys. The Slinky Dog was created based on a suggestion from a customer, Helen Malsed of Washington. She received royalties of $65,000 annually for 17 years. In 1995, the Slinky Dog was redesigned for Pixar’s Toy Story film.

The Slinky inventor gets wonky forcing Betty James to take over leadership of Slinky.

In 1960, James left his wife and six children to join a Bolivian religious cult and moved to Bolivia leaving the business to Betty James. Rather than flounder, the Slinky business flourished under her leadership. Betty moved the factory to her hometown of Hollidaysburg, a small town outside Altoona, Pennsylvania, where the company continues to make Slinky toys today using James’ original machinery. Betty James insisted upon keeping the original Slinky affordable. When it first rolled out, the Slinky sold for $1. In 1996, when the price ranged from $1.89 to $2.69, she told The New York Times:

“So many children can’t have expensive toys, and I feel a real obligation to them. I’m appalled when I go Christmas shopping and find $60 to $80 for a toy is nothing.”

Betty made a couple of ingenious design changes to make the toys safer and cheaper to produce. The sharp edges of the wires were crimped to make the toy safer to handle. Betty also changed from the original blue-black Swedish steel to the silver-colored American metal. She also added other toys to the line including the Slinky Jr., Plastic Slinky, Slinky Dog, Slinky Pets, Crazy Eyes (glasses with Slinky-extended fake eyeballs) and Neon Slinky. The Slinky line was sold in 1998 to Poof Toys.

Slinky gets the recognition it deserves

In 1999, the United States Postal Service issued a Slinky postage stamp. The Slinky was inducted into the Toy Hall of Fame in 2000. In 2001, House Bill No.1893 of the 2001 Session of the General Assembly of Pennsylvania made Slinky the Official State Toy of Pennsylvania. The same year, Betty James was inducted into the Toy Industry Association’s Hall of Fame. In 2003, Slinky was named to the Toy Industry Association’s “Century of Toys List”, a roll call of the one hundred most memorable and most creative toys of the twentieth century. The Slinky is on display at the Smithsonian Institute in Washington, DC, and in the Metropolitan Museum of Art in New York, New York.

How the Slinky is made

Slinkys are made of spring steel wire, .0576 in diameter. It is made of high carbon steel and coated for durability. The Slinky is created as follows:

1. The wire is fed into a machine by a factory worker.

2. The machine flattens the wire, winds it, and cuts it to a preset length.

4. A worker crimps both ends of the coiled wire.

5. A worker places the Slinky toy into a box, and it travels down a conveyor belt to a shrink-wrap machine which wraps the toy.

What walks down stairs, alone or in pairs

and makes a slinkity sound?

Who walks the stairs without a care

It shoots so high in the sky.

Everyone knows its Slinky.

The best present yet to give or get

The kids will all want to try.

The hit of the day when you are ready to play

for fun, the best of the toys.

the favorite of girls and boys.

You can listen to the original Slinky song here.