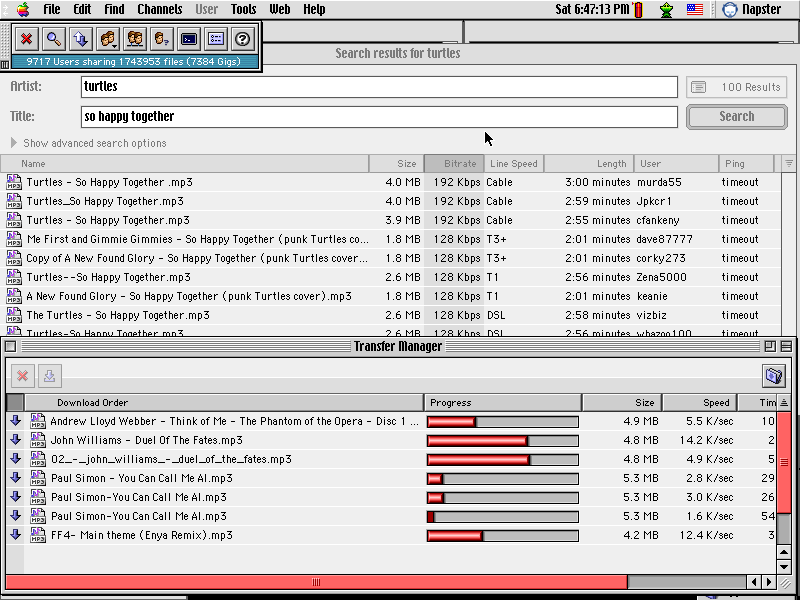 What is file sharing

File sharing is the sharing or distribution over the Internet of electronic files such as multimedia files (movies and music), electronic books, video games, and any other digitally formatted media. With the movement of popular entertainment mediums to electronic formats, file sharing became quite common and widespread. Popular with teens, file sharing often involves copyrighted properties such as music or movie MP3 files and hence, is typically considered illegal.

The history of file sharing

In the early days of the Internet, pioneers of the new communications medium used Usenet, a bulletin board type system intended for text-based chat messages, to post binary copies of music, books, and pictures for sharing with other Usenet users. Since Usenet was not designed for binary file sharing, users had to encode the files for posting and decode the files before the file was available for use. The demand for file sharing was great and it was not long before entrepreneurial minds developed the means to more efficiently, and effectively, share electronic files over the Internet.

In 1999, a startup company, Napster, created a centralized, unstructured peer-to-peer system which required a central server for indexing and peer discovery. Using the Napster software on their Personal Computer, users would connect to the central Napster server in order to search the Napster catalogs for available files. Only the catalog of files was stored on the Napster server – the files themselves were stored on the Personal Computers of millions of Napster users in what is termed a “peer-to-peer network”. When a file was downloaded, the Napster software coordinated the connection and transfer of the file from one user’s personal computer (a peer) to the other user’s personal computer (the other peer). Hence, Napster provided a service where they indexed and stored file information that users of Napster made available on their computers for others to download, and the files were transferred directly between the host and client users.

In July 2001, Napster was sued by several recording companies. As a result, Napster lost in court against these companies and was shut down. This drove users to other peer-to-peer (P2P) services and file sharing continued its exponential growth. LimeWire, Kazaa and BitTorrent protocols were developed with BitTorrent growing the fastest of the group. By 2003, a number of BitTorrent web sites were established including Suprnova, isoHunt, TorrentSpy, and The Pirate Bay.

How files are shared

The most popular means to share files is BitTorrent via uTorrent. Users download BitTorrent software (there are many different clients available) and install it on their personal computers. After configuring their firewall to allow access to file sharing ports, the user then uses a BitTorrent website to search for available shared files. Once a file is found, the BitTorrent software automatically connect the user to peers where the desired file, or “pieces” of the file, are located. These “seeded” files are then transferred to the user’s PC via a direct connection between the peers.

Is it illegal and what are the penalties?

Studies conducted by the RIAA concluded that financial losses incurred per download and that those losses were substantial. The RIAA and its member groups argued that Internet distribution of music, without the consent of the copyright owner, harms the careers of current and future artists, both because record companies would have fewer sales and also because musicians, singers, songwriters and producers depend heavily on royalties and fees gained from their music. As such, the association commenced several high-profile lawsuits against file sharing service providers. It also commenced a series of lawsuits against individuals suspected of file sharing, notably college students and parents of file sharing children.

Between 2002 and 2003, the RIAA attempted to force Verizon to disclose the identities of file-sharing customers. Verizon attorney Sarah Deutsch challenged the subpoena’s validity on procedural and privacy grounds. In December 2003, this failed when a federal appeals court overturned a lower court order. The RIAA claims this procedure was sanctioned by the Digital Millennium Copyright Act, but the appeals court ruled that the DMCA regulation applies only to data actually hosted by an Internet service provider, rather than data on a customer’s computer. The United States Supreme Court declined to review this ruling in 2004. As a result, the RIAA must now file individual civil suits against each accused file-sharer, and the ISP and alleged file-sharer have more legal avenues for preventing disclosure of their identity, making the entire process much more expensive, slow and complicated.

The RIAA names defendants based on ISP identification of the subscriber associated with an IP address, and as such do not know any additional information about a person before they sue. After an Internet subscriber’s identity is discovered, but before an individual lawsuit is filed, the subscriber is typically offered an opportunity to settle. The standard settlement is a payment to the RIAA and an agreement not to engage in file-sharing of music and is usually on par with statutory damages of $750 per work, with the RIAA choosing the number of works it deems “reasonable”. For cases that do not settle at this amount, the RIAA has gone to trial, seeking statutory damages from the jury, written into The Digital Theft Deterrence and Copyright Damages Improvement Act of 1999 as between $750 and $30,000 per work or $750 and $150,000 per work if “willful.”

The RIAA has also been criticized for bringing lawsuits against children, such as 12-year-old Brianna LaHara in 2003. The RIAA also attempted to sue Candy Chan of Michigan, for the alleged actions of her daughter, 13-year-old Brittany Chan. Under the threat of a possible defendant’s motion for summary judgment and attorney’s fees, the RIAA withdrew the case Priority Records v. Chan. When the court ruled in favor of the mother, dismissing the case, the RIAA proceeded to sue her child. However, prosecuting a minor is more difficult; the Michigan federal court required the RIAA to make provision for a guardian ad litem to be appointed to protect the interests of the child, and required the RIAA to be responsible for paying the guardian ad litem. The RIAA failed to submit a workable proposal, and the Court dismissed the case. The RIAA recently sued the 16-year-old son of Patti Santangelo and as of this writing is attempting to force a 10-year-old girl in Oregon to be deposed (she would have been 7 years old at the time of the alleged infringement).

The RIAA has brought file sharing lawsuits against individuals naming the following plaintiffs.

The MPAA has brought file sharing lawsuits against individuals naming the following plaintiffs.

It was reported by the Wall Street Journal that as of late 2008, the RIAA has announced they will stop their lawsuits and instead are attempting to work with ISPs who will use a three-strike warning system for file sharing, and upon the third strike will cut off internet service all together.

The argument for file sharing

According to David Glenn, writing in The Chronicle of Higher Education, “A majority of economic studies have concluded that file sharing hurts sales, though not to the precise degree the record industry would like the public to believe.” A study by economists Felix Oberholzer-Gee and Koleman Strumpf in 2004 concluded that music file sharing’s effect on sales was “statistically indistinguishable from zero”. This research was challenged by Professor Stan Liebowitz, who accused Oberholzer-Gee and Strumpf of withholding data and making multiple assumptions about the music industry “that are just not correct.” Similarly, a 2006 study published by Industry Canada has concluded that file-sharing has no measurable effect on the sales of CDs.

Still, the RIAA continues its battle against file sharers the penalties of which may be quite damaging to the file sharer or her parents.