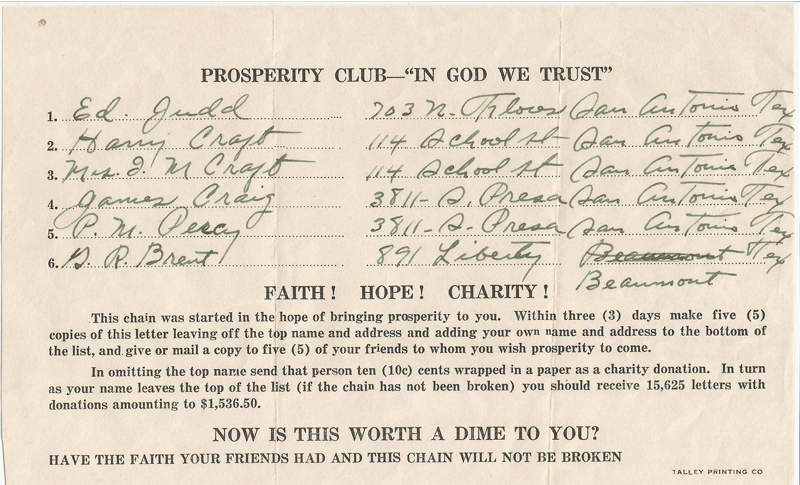 In the spring of 1935, the United States was caught up in a chain letter frenzy. The chain letter craze clogged up postal offices nearly shutting down operations in several locations. Denver restaurant owner A. McVittle received 2,363 copies of the letter in just two days – April 26 and April 27. Public officials were enraged and vowed to catch the originator of the chain letter scheme and prosecute them in federal court.

Chain letters consist of a message that attempts to induce the recipient to make a number of copies of the letter and send them on to as many recipients as possible. The more copies the victim makes and the quicker they send those copies, the more effective (and widespread) the chain letter campaign. Common methods used to induce the recipient to participate in the scheme include stories that emotionally manipulate the recipient, get rich schemes, promises of a prize or money, and stories that attempt to exploit superstitions of the recipient (e.g., you will have bad luck if you do not send this letter on to five more people). Within such a scheme, the number of recipients grows exponentially with each letter sent.

The 1935 “Prosperity Club” or “Send-a-Dime” chain letter campaign began in Denver, Colorado in early spring of 1935 and quickly spread to St. Louis and then across the rest of the United States. The Denver Post first warned readers of the chain letter scheme and its impact on postal facilities on March 19, 1935.

The chain letters reached Dallas by April 30 and St. Louis, Missouri on May 8, 1935. In St. Louis the chain letter doubled their normal volume of mail from 450,000 to 800,000 letters and they experienced the same shutdowns that Denver experienced days before. Within weeks, tens of millions of the Prosperity Club chain letter spread throughout the United States and it is estimated that the Prosperity or Send a Dime chain letter was copied over a billion times worldwide within a few months.

Who created the chain letter

Nobody is quite certain who created the first chain letter. Apocryphal type letters claiming to have been written by Jesus (e.g., the Letter from Heaven) circulated for centuries in Europe. Around 1900 shorter and more secular letters appeared that demanded the reader distribute and propagate additional copies.

It is believed that the Send a Dime chain letter was based on an earlier, similar chain letter that made the rounds in 1922 and that even earlier versions, although not as well-spread, most likely existed too. Interestingly, early versions of Send a Dime type chain letters typically included just the person’s name and town as the postal systems in those days did not require street addresses for delivery.

Federal authorities sought the author for prosecution but were not successful in their hunt. An early newspaper report quoted the Post Office Inspector as stating,

“We intend to trace down the individuals responsible for starting the craze, and when we have the necessary evidence we’ll arrest them for federal prosecution.”

But a 1935 article in the Denver Liberty newspaper wrote that the author of the original letter was a woman. The report stated that she had received a similar chain letter and supposed that with a few minor changes she could cause the letter to propagate more easily. This is supported by the fact that early versions of the letter included women’s names only. The report also proposed that the first version did not include the real person’s name and it is suspected that it may have been an organization as a well-hidden “charity drive”.

Why was the Send-a-Dime chain letter campaign so successful

Recipients of the Prosperity/Send-A-Dime chain letter were promised that if they participated in the chain, they would be the recipient of 15,625 dimes or $1, 562.50. The promise of such riches, especially during the times of economic hardship that were experienced in the 1930’s, encouraged many people to continue the chain letter campaign. In addition, the chain letter continued to expand and soon vacations, clothing and new cars were included in the letters.

Word of mouth also played a bit part in the chain letter “fad” as talk of the chain letter spread mouth to mouth and through the newspaper media outlets which further flamed the fire. During 1935 the Prosperity/Send a Dime chain letter was big news all over the world.

Ironically, since letters in those days were manually copied, it is also believed that errors produced during copying may have produced an advantage. For instance, early versions of the letter used the word “charm”. The sentence read:

“This charm was started in the hope of bringing prosperity to you.”

In later versions the word “charm” was changed to “chain” so that it read:

“This chain was started in the hope of bringing prosperity to you.”

Not only did this change introduce the term “chain letter”, but it promoted the fact that the letter campaign required a “chain” or cooperation to succeed.

Furthermore, as the letters were copied, writers sometimes inserted their own custom text. In some instances, this newly added text was quite effective in encouraging others to continue the chain letter campaign. For instance, later versions of the letter included this line:

“If you are unwilling to carry on this work, please return this letter to the last mentioned on the list so that the chain will not be broken.”

This closed a loophole in the chain letter campaign whereby non-participants served to shut off the flow of the letters and hence “break” the chain.

An earlier Good Luck version of the chain letter

Walter S. Coleman to A. A. Gambill

Copy this out and send to nine (9) people whom you wish good luck. The chain was started by an American Officer and should go three times around the world.

DO NOT BREAK THE CHAIN, for whoever does will have BAD LUCK. Do it within twenty-four hours and count nine days and you will have some great good fortune.

The Send-A-Dime version that exploded onto the scene in 1935 read as follows:

In God We Trust

This charm was started in the hope of bringing prosperity to you.

In omitting the top name, send that person ten cents (10c) wrapped in paper as a charity donation. In turn, as your name leaves the list you will receive 15,625 letters with donations amounting to $1,562.50.

Now is this worth a dime to you?

Have the faith your friend had and the chain will not be broken.