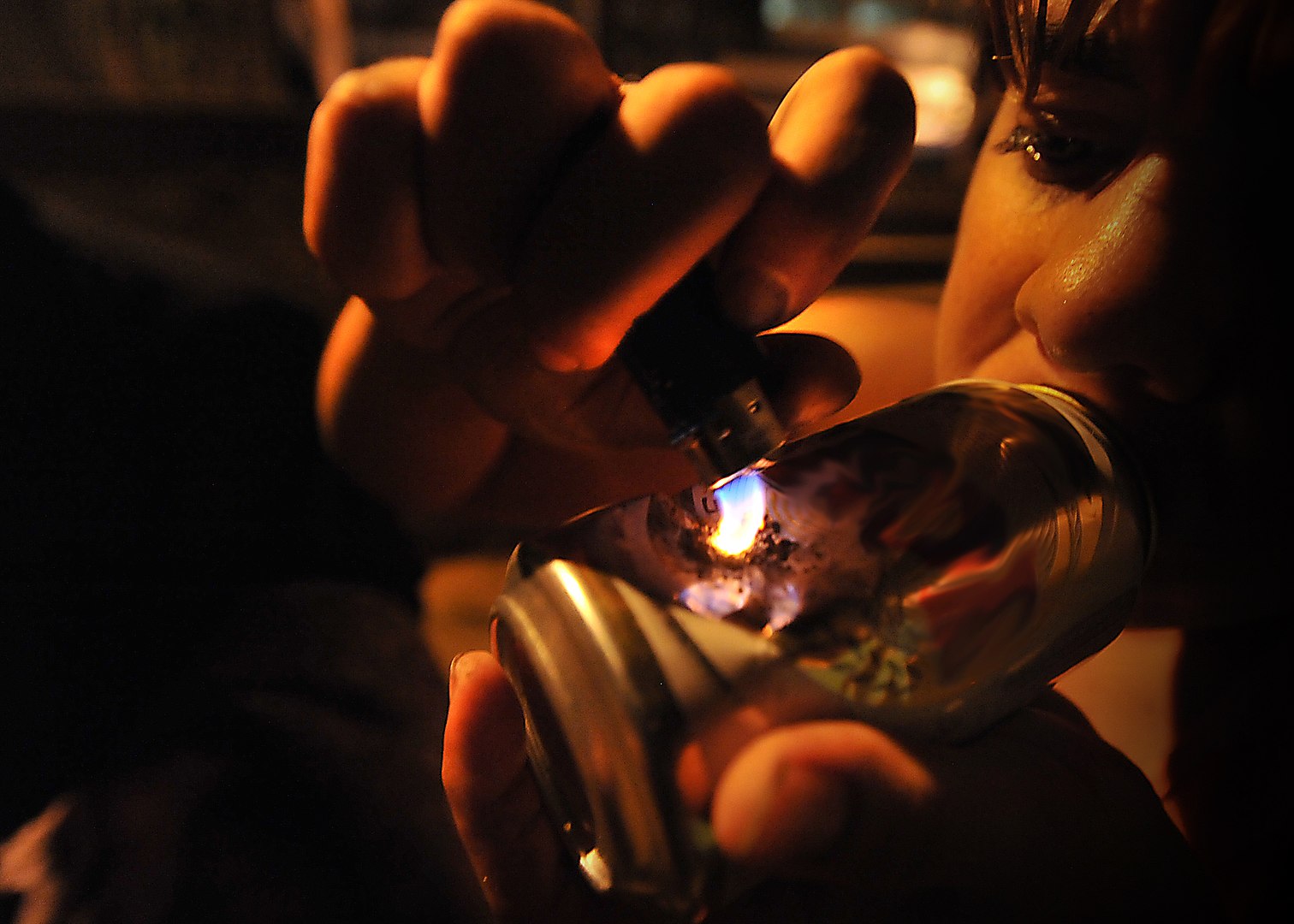 Crack cocaine is the “freebase” form of cocaine that can be smoked in a cigarette or pipe (the name is derived from the crackling noise it makes when it is smoke). In its purest form, it appears as off-white, brittle rocks. Its potency allows it to be “buffed” with other white substances in order to increase the bulk of the drug.

Crack is cheap, easy to get, and highly addictive. It emerged in the mid-1980’s as the popular drug of choice because it was easy and inexpensive to manufacture, making it readily available and cheap. In a 1986 Gallup poll, Americans listed crack cocaine as the most serious problem in American society.

How crack cocaine is made

Crack is made from cocaine — a powdered drug that is derived from the leaves of the coca plant, which grows primarily in South America. Cocaine was first isolated from coca leaves in the mid-1800s. At that time, it was used for medicinal purposes in drinks (Coca Cola at one time used cocaine as one of its ingredients). By the late 1800s, cocaine was also being used as an anesthetic and to prevent excess bleeding during surgery. By the following century, people began to realize that cocaine was an addictive narcotic, and non-medical use of the drug was made illegal with the passage of the Harrison Narcotics Tax Act in 1914.

In the simplest method, crack is made from cocaine powder by mixing one ounce of cocaine, one teaspoon of baking soda, and ¾ cup of water and cooking while smoothing out the bubbles that result. The baking soda breaks down and reacts with the cocaine molecule leaving cocaine as an oily free base. The oily base is “pulled” off using a pipe cleaner or pin and rolled into a rock-like shape. The solid is then dried and broken into chunks called “rocks” that are sold as crack cocaine. This method results in a larger bulk of the drug, a higher potency than that of the base cocaine it was manufactured from, and a much cheaper product.

This method is much safer than the method discussed below but the result is a drug that is less pure than freebase cocaine. This is the primary way crack cocaine is made. It is common for users to “cook up” or “wash” their cocaine into crack themselves.

In the second method, which creates pure freebase cocaine, a gram of cocaine and 10 ml of water are mixed while slowly adding drops of ammonia to the solution. A white, milky precipitate will form. At this point, 5 ml of ethyl ether is added, and the solution shaken. The white precipitate will dissolve in the ether. The ether is then siphoned off and as the ether evaporates, white crystals will form. The crystals are then crushed and put under a heat lamp to let the solvent evaporate. Ether is extremely flammable and can “crawl” from the bottle spontaneously creating explosions several feet away. Many people have died in drug lab explosions using this method.

How crack coaine is used

Crack vaporizes at a much lower temperature than cocaine. Whereas cocaine cannot be smoked (it just burns with no effect), crack can be smoked which allows for quick absorption into the blood stream. Crack takes just 8 seconds to reach the brain. Since it is much more potent than cocaine, the high is intense, and the drug is very addictive.

Crack smoke does not remain potent for long, so crack pipes tend to be short to minimize the distance the smoke travels and hence, allow for less evaporation. The short pipe tends to get hotter than a normal pipe which often causes burns on the user’s mouth, lips, tongue, and fingers (i.e. “crack lip”). The user places the crack in the pipe along with a piece of steel wool that acts as a filter. The crack is then heated from below to produce a vapor that is inhaled into the crack user’s lungs (which then enters the bloodstream).

Crack can also be burned down, mixed with vinegar or lemon juice, and injected with a syringe although this method of usage is rare.

Effects of crack cocaine on the user

Crack cocaine causes supreme confidence, loss of appetite, insomnia, alertness, increased energy, potential paranoia, and an extreme craving for more. It also produces euphoria caused by the release of dopamine in the brain. Dopamine is released by cells in the nervous system during pleasurable activities such as eating or having sex. Crack extends the absorption of dopamine which extends the length of time the user feels the euphoric effect. The high lasts 5-10 minutes after which time the dopamine levels crash below normal leaving the user feeling down and depressed. The drop in dopamine levels is key to crack cocaine’s devastating impact to the user.

The body takes quite some time to replenish dopamine levels in the body. To counter this, a typical crack user will take repeated, quick hits on a crack pipe to keep the high going and intensifying. It is not uncommon for a crack cocaine user to binge on the drug for days straight without any sleep. During these binges, the user will begin to experience extreme irritability and paranoia. The paranoia often escalates into full-blown paranoid psychosis in which the users lose complete touch with reality. At some point, the body begins to shut down, the users practically passes out, and they sleep for days on end as the body repairs the damage that has been done.

An odd psychosis that often develops is “delusional parasitosis” or Ekbom’s Syndrome where the user believes they are infested with parasites. “Cocaine bugs or “coke bugs” often result where the affected user feels “bugs crawling under their skin”. This is sometimes combined with visual hallucinations about insects. Many cases are reported of users scratching themselves until they peel the skin from their arms.

Short term effects include constricted blood vessels, dilated pupils, increased heart rate, and increased blood pressure. Bizarre or erratic behavior while high on crack is common. Users can also experience tremors, vertigo, muscle twitches, and poisoning. Crack deaths often result from cardiac arrest or seizures and there are many cases reported of users dying on their very first use of the drug. Crack can also affect the digestive system causing nausea, stomach pain, and loss of appetite.

If crack is smoked with alcohol a chemical reaction occurs that produces cocaethylene which is a toxic and potentially fatal compound. This compound produces a more intense high though.

A tolerance to crack develops over time which requires higher and higher doses of the drug to produce the desired effects. The brain responds to the dopamine overload by shutting down some of the receptors and thus, the users must take higher doses. At some point during use, the brain rewires itself in a way that requires the user take it. They simply cannot function without it.

Pregnant mothers who use crack may cause damage to their unborn babies. The March of Dimes advises the following regarding cocaine use during pregnancy:

Cocaine use during pregnancy can affect a pregnant woman and her unborn baby in many ways. During the early months of pregnancy, it may increase the risk of miscarriage. Later in pregnancy, it can trigger preterm labor (labor that occurs before 37 weeks of pregnancy) or cause the baby to grow poorly. As a result, cocaine-exposed babies are more likely than unexposed babies to be born with low birthweight. Low-birthweight babies are 20 times more likely to die in their first month of life than normal-weight babies and face an increased risk of lifelong disabilities such as mental retardation and cerebral palsy. Cocaine-exposed babies also tend to have smaller heads, which reflect smaller brains. Some studies suggest that cocaine-exposed babies are at increased risk of birth defects, including urinary-tract defects and, possibly, heart defects. Cocaine also may cause an unborn baby to have a stroke, irreversible brain damage, or a heart attack.

Individuals of all ages used crack cocaine in the 1980’s – teenagers, young adults, and mature adults – all devastated by the drug’s impact. During the epidemic, data reported in the National Household Survey on Drug Abuse indicated that an estimated 6,222,000 U.S. residents aged twelve and older used crack at least once in their lifetime. Nearly 4 percent of high school seniors in the United States used the drug at least once in their lifetime, and more than 1 percent used the drug in the past month.  Emergency room visits due to crack cocaine overdose or complications reached epic highs as addicted users pushed the limits taking higher and higher doses of the addictive drug.

Crack is considered the most addictive form of cocaine due to its intense high and rapid absorption into the crack user’s blood stream. Some users become addicted after trying the drug for the first time. Researchers have found that cocaine-addicted monkeys will press a bar more than 12,000 times to get a single dose of it.

Other names for crack

Other slang names for crack cocaine include: