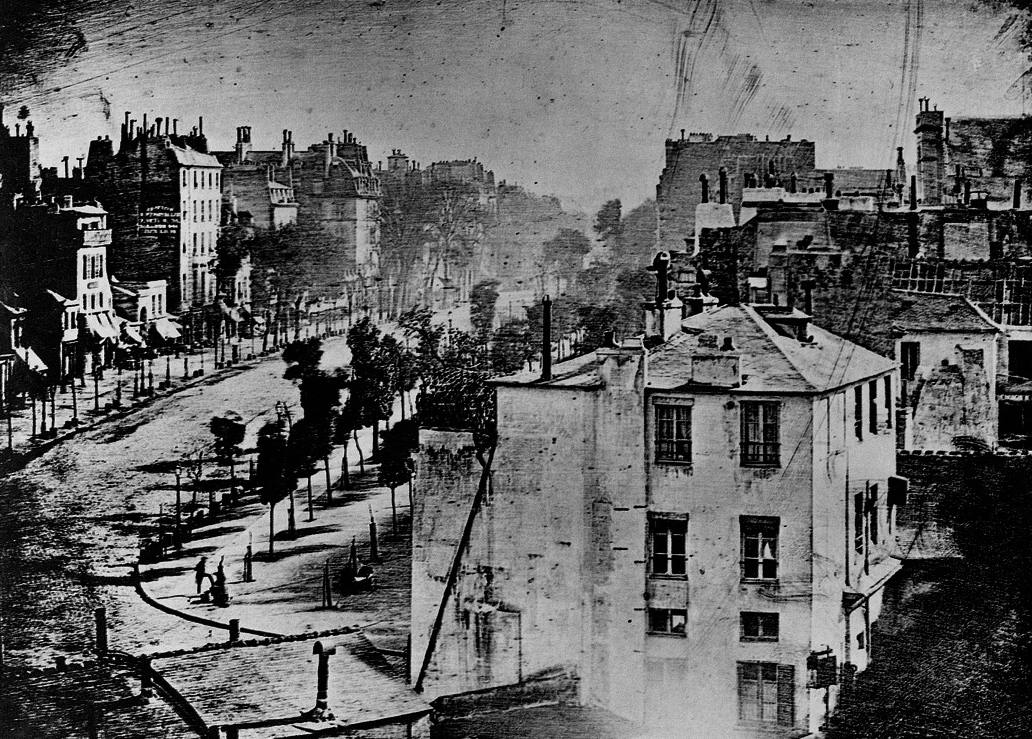 With the introduction of the Brownie camera, an inexpensive, quality camera for the masses, a photography boom began that has continued through the present day. But the invention of photography came long before the Brownie camera hit the streets and in fact, can be traced back as early as the year 1021.

In 1021, the Book of Optics described a device called the camera obscura, of which the first was developed by Arab scientist Ibn al-Haytham. The camera obscura required a large chamber the size of a small room, which held one or two people and featured a pinhole or lens to project an image of a scene onto a drawing surface.

The operator of the device would then trace, or “graph” the image on the drawing surface to produce the photograph. It was used for hundreds of years (even though in 1267, Roger Bacon explained how the Devil could worm his way through the pinhole and onto the paper).

In 1544 mathematician and instrument maker Reiners Gemma Frisius of Leuven University used one to draw a solar eclipse onto paper that was later published in an astronomy book.

By 1685, Johann Zahn was able to reduce the size of the device to a small box that was portable enough to be practical for photography.

Three hundred years after the camera obscura was invented, scientists discovered a new way to do away with the manual tracing step of the photographic process, and replace it with an automated, chemical based reaction.

In 1814, Joseph Nicephore Niepce took the first photograph by coating a pewter plate with bitumen and exposing the plate to light in France. The bitumen hardened where light struck and the unhardened areas were then dissolved away revealing the picture image.

Niepce took the first photo looking out of his home. Unfortunately, no clear picture exists of Niepce’s accomplishment.  The first photographic image faded. Photographers have cleaned the image to some degree but the result is still disappointing.

The first practical photograph method, called the daguerreotype, was invented in 1835 by Louis Jacques Daguerre and his partner Joseph Nicephore Niepce (who died before their invention was completed). The process required coating a copper plate with silver and then treating it with iodine vapor to make it sensitive to light. The image taken on the plate was then developed by mercury vapor and the image fixed with a solution of salt. Daguerre took a picture of a street in France. Barely visible, in the bottom left-hand corner of the picture, is a sidewalk shoe shiner shining a man’s shoes. It is the oldest known picture of a human being.

George Eastman is credited with developing the first practical cameras for consumers. Eastman was a high school dropout and “not especially gifted” in the academic area. As a young man he was poor but worked hard to support his widowed mother and two sisters (one of which was handicapped). He taught himself accounting methods to secure a better paying job. By 1877, George was a bank clerk making $1,500 a year.

When George was 24 years old, he made plans for a vacation to Santo Domingo. A friend suggested he purchase a camera to record the trip on. As suggested, Eastman spent $94 on a new photography outfit. The camera was microwave-oven-sized and required a tripod to stabilize. In addition, the camera required photographic emulsion to be spread on glass plates before exposing them. It also required chemicals, glass tanks, plate holders, and jugs of water. Eastman never made the Santo Domingo trip, but he became mesmerized by this new hobby.

With the equipment that Eastman had, developing the pictures required several steps and an expensive and complicated process. Eastman felt there had to be an easier way. He read in a British magazine that photographers across the ocean were making their own gelatin emulsions in their photographic plates. With this type of emulsion, the plates could be coated and would remain sensitive even after they were dry. Using a formula from the magazine, Eastman began making his own gelatin emulsions and continually worked to improve on them.

Eastman worked at the bank during the day and experimented with photographic methods at home in his mother’s kitchen at night. His mother said that some nights Eastman was so tired he couldn’t undress but slept on a blanket on the floor beside the kitchen stove.

After three years of photographic experiments, Eastman had a formula that worked. By 1880, he had not only invented a dry plate formula, but had patented a machine for preparing large numbers of plates. He quickly recognized the possibilities of making dry plates for sale to other photographers.

Birth of the Kodak Company

In April 1880, Eastman leased the third floor of a building on State Street in Rochester and began to manufacture dry plates for sale. One of his first purchases was a second-hand engine priced at $125.

“I really needed only a one horse-power,” he later recalled. “This was a two horse-power, but I thought perhaps business would grow up to it. It was worth a chance, so I took it.”

As his young company grew, it faced total collapse at least once when dry plates in the hands of dealers went bad. Eastman recalled them and replaced them with a superior product.

“Making good on those plates took our last dollar. But what we had left was more important – reputation.”

Still, he continued to seek a flexible, light, and unbreakable material that could be coated with the photographic emulsion. He discovered that celluloid was the answer to his problem. In 1884, he patented a method of coating strips of paper so that they would work in a camera. Eastman became the first to develop the paper-based photograph technique that we still use today.

His first camera, which he called the “Kodak,” was first offered for sale in 1888. It was a remarkably simple box camera with a fixed-focus lens and single shutter speed. The Kodak came pre-loaded with enough film for one hundred exposures and needed to be sent back to the factory for processing and reloading when the roll was finished. By the end of the 19th century Eastman had expanded his lineup to several models including both box and folding cameras.

In 1900, Eastman took mass-market photography a step further with the Brownie camera, a simple and inexpensive point and shoot box camera that introduced the concept of the “snapshot”. George Eastman tasked his camera designer, Frank Brownell, to design the least expensive camera possible (while ensuring it was durable and reliable). Eastman felt a cheap camera alternative would open the market to more people creating a demand for more film. He especially felt children would be attracted to the new device.

The device was made from simple black cardboard and wood-covered box wrapped with imitation leather and nickel fittings. It featured a simple “meniscus” lens that took 2¼-inch square pictures on 117 roll film. It sold for only $1.

The Brownie was easy to operate too. To take a picture you held the camera at waist height, aimed at your subject, and turned a switch. Regardless of its ease of use, a 44-page instruction booklet accompanied every Brownie camera.

The film was affordable for consumers but profitable for Kodak. For fifteen cents, a Brownie camera owner could buy a six-exposure film cartridge that could be loaded in daylight. Kodak pointed out that they would develop the film for the camera owner rather than requiring the camera own invest in a darkroom and materials. The Eastman Kodak Company sold over 250,000 Brownie cameras to the American public.

The camera was marketed heavily and often featured children in the advertisements. The slogan for the camera was “You push the button; we do the rest.” The Brownie was extremely popular and various models remained on sale until the 1960s.