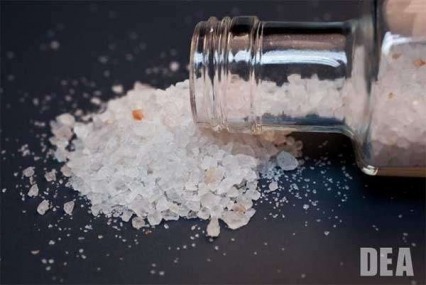 It is sold to children and teenagers labeled as bath salts, fertilizer, or insect repellent under names like Ivory Wave, White Lightning, Red Dove, Vanilla Sky, Cloud 9, or Blue Silk.  The label says “not for human consumption” but it is intended to be snorted, swallowed, smoked, or injected.  As of 2011, the DEA did not regulate them.  Its effects are comparable to methamphetamines or cocaine.  And it’s been directly implicated in the deaths of several teenagers.

The effective compounds in sniffable bath salts are chemicals called mephedrone and methylenedioxypyrovalerone, also known as MDPV.  The base substance is derived from a plant grown in Africa and manufactured into MDPV and mephedrone in a chemical lab.  It is a white, sometimes light tan, waxy-like, crumbly powder with a slight odor.  MDPV will darken slightly and take on a potato like odor when exposed to air for any length of time. It is four times as potent as Ritalin.

The sniffable bath salts can be bought on the Internet or from convenience stores, truck stops, tattoo parlors, and tobacco shops – the same places that sold K2 or Spice synthetic marijuana before those substances were made illegal by the DEA.  It is typically sold as bath salts but may also be marketed as plant food, fertilizer, or insect repellent.  It is packaged in 50 milligram (2/100 of an ounce) packets and sold for as little as $20 per package.  It is labeled “not for human consumption” in order to shield the manufacturers from the scrutiny of food and drug officials.

The Effects of MDPV

Users of MDPV typically snort the drug to get a cocaine-like high (the drug is not related to cocaine in any way).  The drug affects neurotransmitters in the brain to produce stimulant like effects on the user.  The highs are known to be very high while the lows are typically very low.

In addition to hallucinations, the drug produces highs similar to the euphoria experienced by users of cocaine and amphetamines.  It offers the user increased alertness and awareness, increased energy and motivation, high mental stimulation and increased concentration, increased sociability, and high sexual stimulation and aphrodisiac effects.  The effects of the drug typically last from three to four hours with after affects lasting from twelve to forty-eight hours.

“They will do stuff that they wouldn’t normally do, like dive from a third-story window into a pool. It’s very, very dangerous.”

One of the most alarming and dangerous negative effects is the increased cravings for the drug that result during the comedown phase.  Users report a compulsive desire to continuously re-dose and will binge on the drug for days, even if they experience horrible trips as a result of the dosing.  These extended binges bring on severe depression, lethargy, headaches, anxiety, lightheadedness, weakness of muscles, and many other negative effects.  It also causes severe and long lasting, possibly permanent, psychosis, even upon the users’ first use of the drug.

Louisiana was one of the first states to outlaw the drug after the state’s poison center received more than 125 emergency calls in just three months.  When the center was averaging 4 to 5 calls per day, they knew there was a major problem erupting in their state and they moved quickly to outlaw the drug.

Neil Brown of Fulton Mississippi got high off the bath salts and subsequently slashed his face and stomach.  Neil was a seasoned drug user having taken heroin and crack cocaine.  Neil Brown was so badly shaken by the terrifying hallucinations that he wrote a local newspaper urging people to stay away from the bath salt drugs.

In south Louisiana, a 21-year-old man cut his own throat and then ended his life with a gunshot wound to the head after experiencing days of hallucinogenic effects.

In the UK, the body of 24-year- old chef and regular Ivory Wave-user, Michael Bishton, was hauled out of the sea by fishermen off the coast of the Isle of Wight.  He is thought to have jumped or fallen from a clifftop on the east side of the island while high on Ivory Wave.  He died from his injuries.

Dickie Sanders snorted the Cloud 9 variant of the drug that he had purchased from a convenience store.  He endured three days of delirium and sleepless nights.  At one point, he hallucinated that his home was surrounded by police helicopters and police cars.  In front of this father, he cut his throat from ear to ear narrowly missing major arteries.  After being put on a suicide watch, his father slept with him to keep a careful eye on his condition.  Sanders woke up in the middle of the night, snuck into the kitchen of their home, and shot himself in the head.