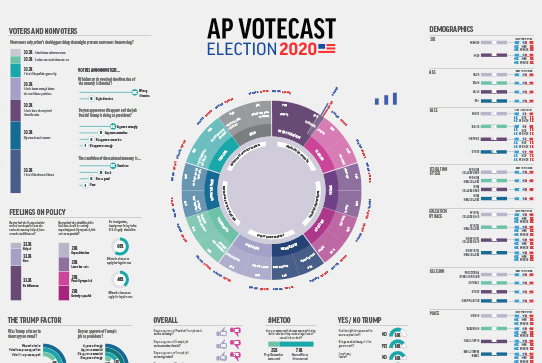 Accurately predicting a winner before the race even ends

“There is no national election commission in the United States that tells us who wins on Election Day. Statewide results aren’t available in every state, either. If we want to know who the next president will be, we’ve got to do the math ourselves — county by county nationwide.”

In November 2000, during the George W. Bush vs. Al Gore election, the creditability of major news outlets was damaged when almost all news outlets prematurely called the race for Gore at 8:00 PM. Less than six hours later, around 2:00 AM, they reversed their prediction and called the race for Bush. By morning, all news media outlets had rescinded their calls when the automatic recount in Florida began. The single news outlet that did not incorrectly call the election was the Associated Press (AP), saying the margin in Florida made it too close to call. That all other news outlets made the incorrect call was all the more surprising since all news media obtain their election results from the exact same source – the Associated Press.

How the news media correctly predicts the election outcome

News media project the winners of elections long before state election officials certify the vote count, even long before all votes are counted. Using data collected from the Associated Press, they’ve been accurately predicting election winners since 1848.

AP has been counting polling data for more than 120 years. To date, they have correctly predicted the presidential and congressional races 100% of the time. They’ve correctly predicted local elections 99.8% of the time. Their track record is pristine because they are conservative in their predictions, focusing on a correct result rather than a timely prediction. AP Deputy Managing Editor David Scott explained,

“AP does not make projections or name apparent or likely winners. If AP cannot definitively say a candidate has won, we don’t speculate.”

The Associated Press uses prediction models, state and national-level experts, and mounds of data to formulate an election prediction. The process begins before the polls even close.

Shortly before the polls close, AP sends more than 4,000 “stringers” to the county election centers in each state. At these election centers, local election officials collect the ballet tallies in each precinct under carefully controlled conditions. Local election workers pass the tallies to county officials who pass them on to state officials. State officials then make the results available to reporters, including the Associated press stringers who are standing nearby.

The stringers take the voting data obtained from state officials and phone it in to more than 800 vote entry clerks located in AP election centers. When the call arrives, the vote entry clerk walks the stringer through a pre-planned dialog. The stringers are asked if there have been any problems in the county election process, if anything seemed suspect, and how many votes are still outstanding.

An AP vote entry clerks enter the data into a system which flags suspicious entries as they come in. If the data looks inconsistent or is statistically unlikely, the data is flagged so the vote entry clerk can double check their entry.

The AP election center also culls data from hundreds of county websites who make the data public as the votes are counted. The data collection continues until about 4:00 AM and then picks back up at 9:00 AM and continues until AP can determine the final election result.

The final decision to make the call

AP maintains a Decision Desk where a team of race callers make a prediction when there is enough information to declare a winner. During the entire election process, election researchers and quality control analysts monitor and examine the results for anomalies. When experts in each state determine there is enough data to make the call, the Washington decision desk is contacted with the proposed decision. The Washington bureau chief then signs off on the call before it is passed to member news outlets.

Why news media outlets make the call at different times

Being first to call an election is an important achievement for a news organization. However, making the wrong call is a major embarrassment and damages their credibility. All major news outlets, including ABC, CBS, NBC, and Fox, are part of the National Election Pool. They also conduct their own exit polls to add to the data they receive from AP. Each network maintains its own election desks who compile data used to make the final call. Thus, despite obtaining data from the same source, each news outlet uses their own models, includes their own data, and makes their own prediction, carefully balancing the risk between making the call too late, and blowing the call altogether.