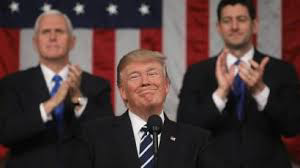 U.S. President Donald Trump has maintained throughout the impeachment inquiry that he did nothing improper in his dealings with Ukraine, even as witnesses have detailed efforts by his White House to get Ukraine to take actions that could help him politically. During the Senate trial, it became clear that Trump withheld military assistance in order to pressure Ukraine to investigate the Biden’s and other democrats. Many politicians tried to back out of statements made earlier. Here are the politicians that once lied to the American public by claiming, with authority, that there was no quid pro quo.

“Now, all of a sudden, quid pro quo doesn’t matter because now they see, in the call, there was no quid pro quo.”

“Contrast that with the transcript of the president’s phone call with President Zelensky where there was no quid pro quo. There was no pressure.”

“What we do know is there was definitely no quid pro quo. I mean, it came out over and over.”

“People who are trying to imply that the president is asking for things or quid pro quos, I think this is ridiculous.”

6. Kellyanne Conway, counselor to the president

“As the president said, this was a perfect call… In fact, if you read what’s there, you see what’s not there — no quid pro quo.”

“There was no quid pro quo. There was no issue about finally getting the military assistance. And he thanked us.”

“You’re focused on is impeaching the president over a lie about quid pro quo that never even happened.”

“There was no quid pro quo in the — in the phone conversation. So, no doubt that the haters are going to hate.”

“A lot what the Democrats had been raising, alleging an illegal quid pro quo was not, in fact, backed up by the transcript.”

“If they would release the transcript from Ambassador Volker’s testimony and interview last week, you would see that Ambassador Volker backs up exactly what you just said. There was no quid pro quo.”

“Remember when Pelosi said that the transcript would show a quid pro quo? It doesn’t.”

“What is so disgusting is the fact that the Democrats continue to try to build up this narrative on, well, there was a quid pro quo when the call — when the call happened.”

“Donald Trump has every right to withhold aid.”