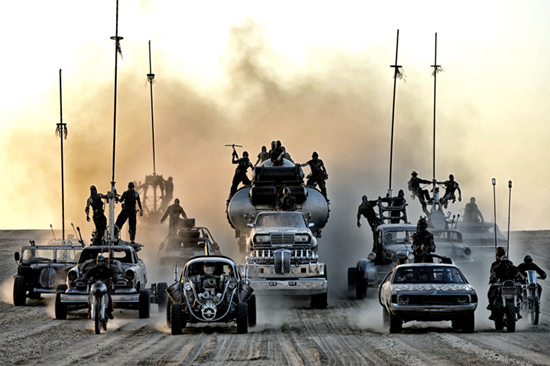 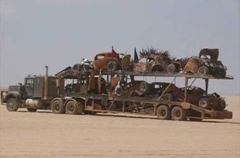 George Miller insisted that Colin Gibson, production designer responsible for all the cars in Mad Max: Fury Road, make all the cars in the movie not only cool, but real working automobiles with ultra-tuned, tweaked out engines – and Gibson delivered the goods.  When seeking autos for the movie, Gibson looked for rides without modern-day carbon fiber or computer chips, but cars with style.  Thus, all the cars in the movie are vintage automobiles, many manufactured in Australia.  For the main story line, Gibson created 88 final cars, each with its own story and team of mechanics to build and keep running. All told, he made 150 vehicles for Mad Max: Fury Road, many of which, sadly, never made it out of the desert.

“The camera department was terrified. When you have 80 cars flying at 80-km per hour, occasionally you have some that don’t keep up. We destroyed more than half of those in the actual making of the film.”

Here are the automobiles, including details on their mechanics, used in Mad Max: Fury Road.

Mad Max’s Interceptor car made a brief appearance at the beginning of the movie.  The 1974 Ford XB GT Falcon Hardtop was produced by Ford Australia between 1973 and 1976.  Mad Max’s Interceptor is powered by a supercharged 5.8L V8.  In the older Mad Max movies, two more XB sedans were used as Main Force Patrol interceptor vehicles.

Imperator Furiosa’s War Rig, is a Czechoslovakian Tatra Truck (Tatra is the third oldest car maker in the world behind Daimer and Peugeot) and Chevy Fleetmaster car fused together into a six-wheel-drive 18-wheeler powered with twin V8 engines. In Mad Max: Fury Road, the War Rig spends much of the movie toting a fuel tank and fuel pod.  Welded to the top of the fuel tank are a Volkswagen Beetle (rear-facing) and truck cabins that function as gun turrets. 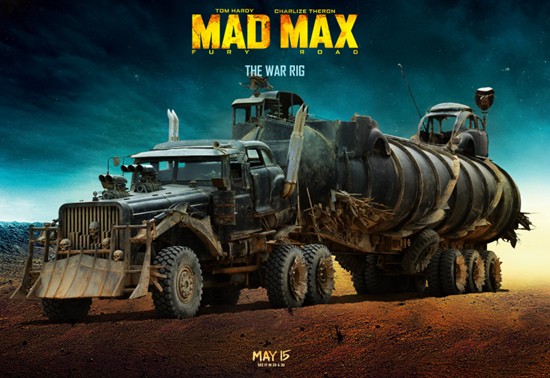 No Mad Max: Fury Road car was better named than Cranky Frank, a crop-topped Holden FJ Rat Rod (Holden FJs were produce in Australia from 1953 through 1957) with a 4-intake, supercharged V8.  Topped with a tower of carburetors and a belt-drive blower, it’s low cut windshield and “scowling” grill truly do give it the appearance of an angry old man.

This photo showed up in an Internet forum which appears to show Cranky Frank when he was a bit younger.

The People Eater’s Mercedes Limousine features lattice-windows and the grills from dozens of cars that it has consumed.  The Mercedes body is mounted on top of a tractor-trailer truck rig.

The Buick straddles a extended rear differential and double rear wheels mounted on a heavy-duty extended axle.  Mounted atop Buick is a slew-ring turret and anti-aircraft gun.

Buick started off as this:

Joes Gigahorse car is constructed from two 1959 Cadillac DeVille’s that have been split, widened, and mounted atop each other.  It has a custom gearbox and two turbocharged V8 engines (502hp Big Block Crate motors, each with blowers) with 5 1/2 foot double-wide wheels (check out the size of the wheels compared to the actor standing next to them).  Throw in a whaler’s harpoon and a flamethrower mounted on the rear and you’re looking at one of the most recognizable vehicles in the movie.  Gibson explained:

“In a world where nobody had one of anything, it seemed a fait accompli that he would have a pair of 1959 coupe DeVilles. We spent two months making them operational. 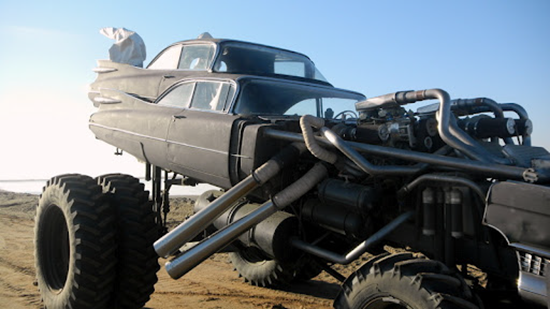 In this photo of Gigahorse, notice the War Rig’s fuel pod in the background…

The biggest star vehicle in the movie has to be the Doof Wagon.  This monstrosity features a supercharged V8 engine, a mobile stage, a wall of speakers, and a full set of giant Taiko drums.  Check out more pictures and details on the construction of the Doof Wagon here.

The Plymouth Rock car is built on a 1937 Plymouth Sedan frame covered with over 200 metal spikes including wheel-mounted spikes for ripping sidewalls out of enemy cars.

Nux’s Chevrolet Coupe is a 1932 Chevy 5-window Coupe tricked out with a super-turbocharged, nitrous-boosted, V8 engine.  Canted wheels and swooping exhaust pipes round out the visual feast.

“The ’32 Deuce coupe is the perfect little hot rod to drive to Valhalla—everything we did to that car was to fetishize it.”

Rictus Erectus’s (7-foot-tall son of Immortan Joe) Bigfoot is an early 1940s-era Fargo Truck with a harpoon, belt-driven machine gun, and a nearly 600 cubic inch supercharged V8 engine turning a Turbo 400 automatic transmission.  It runs atop 66-inch off-road tires and oversized axles from a military supertanker – all mounted on top of 4-feet of customized heavy-duty suspension.  If you travelling in its wake you’ll have the creepy view of over a dozen chromed baby doll heads peering from its rear bumper.

The Bullet Farmer rig is a 1970’s-era Valiant Charger chassis welded to the body of a US Ripsaw Tank (an unmanned light tank built by Howe & Howe Technologies) and powered by a water-cooled Merlin V8 engine.  It has a machine gun, tank treads, and a harpoon all protected by a huge wall of armor.  It’s one of at least two Valiant Chargers featured in the movie. 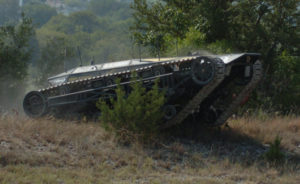 A second Valiant made its appearance as Prince Valiant.  Built off a 1971 Australian Valiant Charger, it features a V8 and “rust” flames on the hood and front panel.  Weapon systems include a high-volume flamethrower, Molotov grenades, and a crew of three-assault shooters.

The Rock Riders glided over desert cliffs on Yamaha motorcycles customized with supercharged weaponized caltrops and tricked-out frames.  All of the motor cycle stunts in Mad Max: Fury Road were real and at least one rider was injured during shooting (face smash into the handlebars).

The Perentti was an Australian sports car modelled after American muscle cars (the Corvette in particular, which wasn’t exported to Aussie Land and was left-hand-drive-only) yet given a fiberglass body.  A few of the Buggy’s in Mad Max: Fury Road were built off of Perentti’s.

Here’s another Buggy with a slightly different build.

The Vuvalini ladies rode a variety of motorcycles including two BMWs and a few Royal Einfelds.  Forks on the bikes were stripped down and reconstructed from washing lines and jack hammers.

Built from, what else, a Mack Truck, Mad Max: Fury Road’s Mack is a 1950’s-era R-Series Mack tow truck with multiple harpoons welded to its frame.

For Elvis, Gibson crammed two GMC 6-cylinders end-to-end on an extended chassis built from a 3-window coupe.  It has nitrous oxide injection in each engine and a single gunner mounted on top.

Firecar #4 is a 1970’s Holden HZ Ute trimmed in bleached bone skull heads and radial rubber tires.  It’s armed with dual gunnels and a flamethrower in the rear and shotguns, lancers, and a gunner in the front.

The Ploughboy is a Holden EH Wagon built onto a off-road frame with added harpoons and hydraulic ploughs.  The EH Wagon, unfamiliar to most American readers, was produced by General Motors-Holden’s in Australia from 1963 to 1965 and later replaced by the Holden HD series of wagons.

Dodge is an old-school hot rod featuring a rear-facing flamethrower.  Powering this beast is a Roots blower unconventionally mounted low ahead of the radiator.

The FDK features a supercharged V8 stuffed in a Volkswagen Beatle.  In Mad Max: Fury Road, the FDK acted as a convoy guard for the People Eater’s Mercedes Limo.  It features huge drums for fuel (guzzolene) and a double-barreled rear-facing flamethrower

The Buzzard Excavator was constructed on the base of a MAN 6X6 tractor truck (MAN is a Munich, Germany-based truck and tractor company) and features 1,757 steel spikes protruding dangerously from its body.  Gibson says that’s the same number of quills on an Australian anteater.

As expected, many of the cars did not survive shooting of the movie.  Here are a few loaded onto a rig, prepared to be shipped offsite.