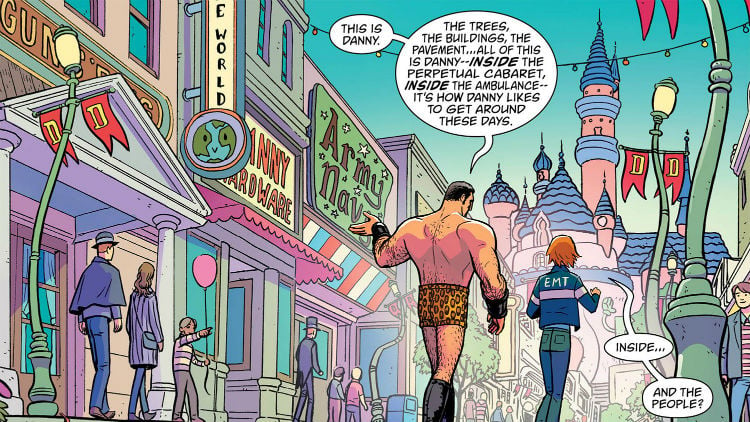 But that’s not all. Danny the Street character sheet gets much weirder. Danny communicates with others in a variety of forms – words formed with vapor rising from a manhole, morphing signs in a store window, through rearranged pieces of broken glass, via text messages on a teletype machine, or any other facility within the city that is Danny. And Danny is – hold on to your hats for this one – a cross-dressing gender non-conforming transvestite genderqueer gay man that expresses his flamboyancy through gun shops decorated with neon pink hearts or sporting goods stores decorated with frilly laced doors. Yes, Danny is hard to characterize.

Danny hopes around the world (and beyond), shirking enemies who seek his destruction while offering a safe place for all outsiders seeking shelter, safety, and community to live free from judgement or persecution. You may see Danny in the middle of a desert or at the end of a street you thought you knew well. Step into Danny’s travelling city and you’ll be greeted with “Bona to vada” (Polari slang) in the form of smoke signal or animated banner flinging open above a storefront. You see, Danny is light-hearted, kind, and humorous – but don’t make him mad. Danny can turn villainous and change the surroundings to place anyone within his borders in a nightmarish, bewildering maze if they cross him.

Where did Danny the Street come from?

In the New 52 reboot of DC’s continuity, Danny appears in Teen Titans #3 and becomes a member of the team. During “The Culling”, Danny is killed. Or was he? It is hinted that Danny the Street survived as “Danny the Alley”.

In DC Rebirth, Danny the Brick is carried and protected throughout the universe by Crazy Jane. After being used to kill a God, Danny becomes an amusement park called “Dannyland” and ultimately “Danny the World” where he becomes so powerful, he can create his own inhabitants. It is there that he creates a comic book character named Casey “Space Case” Brink, then accidentally brings Casey Brink to life. Casey never knows she is the creation of Danny the Street until she is returned to him.

So, who is Danny the Street? He is (or has been) Danny The World, Danny the Brick, Danny the Bungalow, Danny the Island, Danny the Alley, Danny Comics, Dannyman, Dannyland, Danny the Meat, Tales from the Danny, Uncanny Danny, Incredible Danny, and Spider-Dan. The last we saw of Danny, he was incarnated as “Danny the Ambulance” but by the time you read this, there is no telling who, where, or what Danny the Street will be. He is everything all rolled into one.

In Season One of DC Universe’s Doom Patrol series, Danny the Street was a prominent character. We dug around and found that Doom Patrol used a quaint southern town near Stone Mountain for the backdrop. It was filmed on Main Street in Lithonia, Georgia. Below is the opening shot of Danny the Street and a Google Maps picture of the actual location.

Check out the gallery below. Arrows point to the location where the shots were taken.

Here’s a clip that shows how Danny the Street was introduced on Doom Patrol.