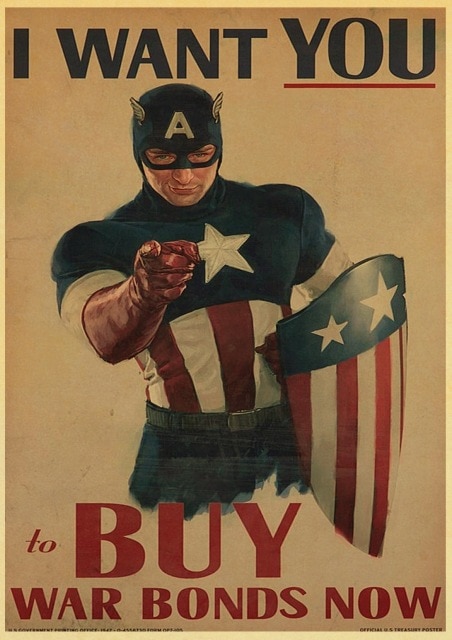 You know the story. A weakling with the heart of a lion wants to fulfill his patriotic duty but is passed over because of his lack of might. He’s given a super soldier serum, becomes all-powerful, and is drafted into service as Captain America. His names was, of course, Steve Rogers. But that’s not all there is to Captain America’s story.

Steve Rogers as Captain America has evolved over time. In various incarnations, Steve has retired, quit, been put into suspended animation, and even died. But the Marvel’s Captain America moniker continues without him. Here are all the Captain America characters to date.

The original. Steve Rogers introduced the Captain America character back in 1941. He grew up a sickly lad with over-the-top ambitions. Too weak to serve in the military, he’s give a super soldier serum which gives him super-human strength and the ability to take on an entire army of Nazi’s singlehandly.

Known as the “Spirit of 76”, Naslund took over the Captain America for a brief time in 1977 while Rogers was in suspended animation. He was crushed to death by a time-travelling robot that had been sent to earth to assassinate JFK. With his dying breath, he passed the mantle to…

Known originally as the Patriot, Mace took over the stars and stripes after Naslund was killed. He carried the title for four years before retiring in 1950. He eventually died a hero’s death by sacrificing himself to save the S.H.I.E.L.D. team after being chosen by the Contemplator to help Captain America (Rogers) overthrown Adam II.

Did he or didn’t he, that is the question. Burnside longed to be Captain America, to the point of obsession, and after receiving a tainted does of the super soldier serum, and getting plastic surgery to look more like Steve Rogers, became a psychotic version of the Cap. He eventually became (more) unstable and turned into the supervillain The Grand Director.

When Rogers took some time out to find himself (and became “Nomad”), Simons stepped in to fill his shoes. He was trained by Falcon who pleaded with him to abandon the Captain America role for his own safety. Simons lasted only a few issues before being killed by the Red Skull, opening the position back up for Rogers’ return.

AKA U.S. Agent, Walker served as Captain America for a brief time after a disillusioned Steve Rogers withdrew from the role. He was formerly known as Super Patriot and was far more violent than Rogers. After several issues, he transitioned to U.S. Agent and remains there to this day.

When Dr. Erskin dies and the Super Soldier Serum formula is lost forever, the US government recruits black soldiers to test a new super soldier program. Only a handful of them survive, including Bradley. When he returns home from World War II, he is arrested for stealing the Captain America costume and shield. He is imprisoned for two decades before being pardoned by JFK. As he ages, the flawed serum destroys his mental and physical state.

Barton makes the least even though he never officially takes on the Captain America role. Known as Hawkeye and Ronin, he is approached by Tony Stark to take over the Captain America role after it appears that Rogers is assassinated. He found he could throw the shield properly and almost took on the role. Ultimately he felt it would be disrespectful to Rogers and declined the role, then revolted against Stark when he gave the shield to Bucky Barnes.

Bucky Barnes, aka the Winter Soldier, has been all through the MCU. In fact, he was a childhood friend of Steve Rogers. After being captured by the Russians in World War II and turned into a deadly assassin, his storyline often revolved around the regrets he carried for the deeds done as an assassin.

In 2007’s The Death of Captain America, Barnes stepped into the role when it seemed Rogers had died at the hands of an assassin. He was stripped of the role when it was decided his past would reflect poorly on the role.

In a Earth-616 version of Castle (aka The Punisher), he tweaks his Punisher costume to resemble Captain America. His time at the helm (at least in his mind) was short-lived. “Captain Punisher” eventually turned over the costume to Winter Solider after only a few issues and returned to his role as The Punisher.

Known originally as the Falcon, Wilson took over as Captain America as part of the Marvel NOW! relaunch. When Rogers is rapidly aged (due to the serum deteriorating his blood), he turns over the role to Wilson. Sam’s time at the helm took a close look at what happens when a black man becomes Captain America.

In Earth-65, Samantha Wilson dons the stars and stripes after being approached by Peggy Carter and agreeing to be part of Project: Rebirth. She was believed to have died but was later found trapped in an alternate universe. When she escaped, 75 years had passed in her world. She continued to fight crime as an agent of S.H.I.E.L.D.

In Earth-298, Roberta Mendez was forcefully given the super soldier serum. Serving as Captain America in the 2099 universe, she fought alongside the Avengers using a high-tech costume. Oddly, she suffers from a split personality as is unaware of her powers as Captain America (she’s a receptionist at the Alchemax corporation during the day).

Of course, her last name is familair to most fans – Danielle is the daugther of Luke Cage and Jessica Jones. In the future, it is found that she inherited the powers of her parents and using a replacement shield (the original was lost), carries the role of Captain America.

The daughter of Steve Rogers and Peggy Carter took on the role as Captain America and an agent of S.H.I.E.L.D. after her parents retired from active service. Using new high-tech armor gifted from Tony Stark (which included a blaster lance and an energy absorbing shield), she runs missions as Captain America for S.H.I.E.L.D.

Better known as Cyclops, Summers took over the role in an alternative Earth 81122 after an accident robbed Steve Rogers, Jean Grey, and Scott of their powers. Scott took over the shield and led the remaining X-Men.