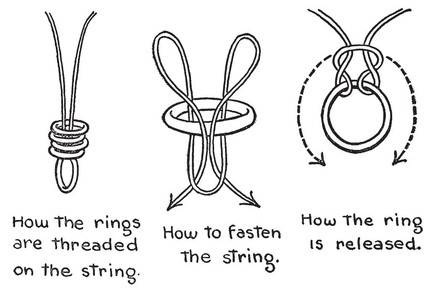 What the audience sees

Several rings are borrowed from the audience and the largest is tied to the middle of a piece of string about two feet long. The other rings are then threaded over the two ends of the string by a spectator, so they rest above the first ring. Two spectators now hold the two ends of the string, and a handkerchief is thrown over the rings. The magician holds his left hand, palm upward, beneath the rings and puts his right hand beneath the handkerchief for a moment. Almost instantly the rings fall down into his left hand, having been magically released from the string.

The way in which the first ring is fastened to the center of the string is the secret of the trick. The string is doubled and the looped end is pushed through the ring. The two ends are then passed through the loop and pulled as far as possible, thus securing the ring in a loop. This appears to be a perfectly tight knot, but it can be undone in a moment by simply drawing the loop down over the ring. The string will then pass through the center of the ring, and all the rings will be released and fall into your hand.