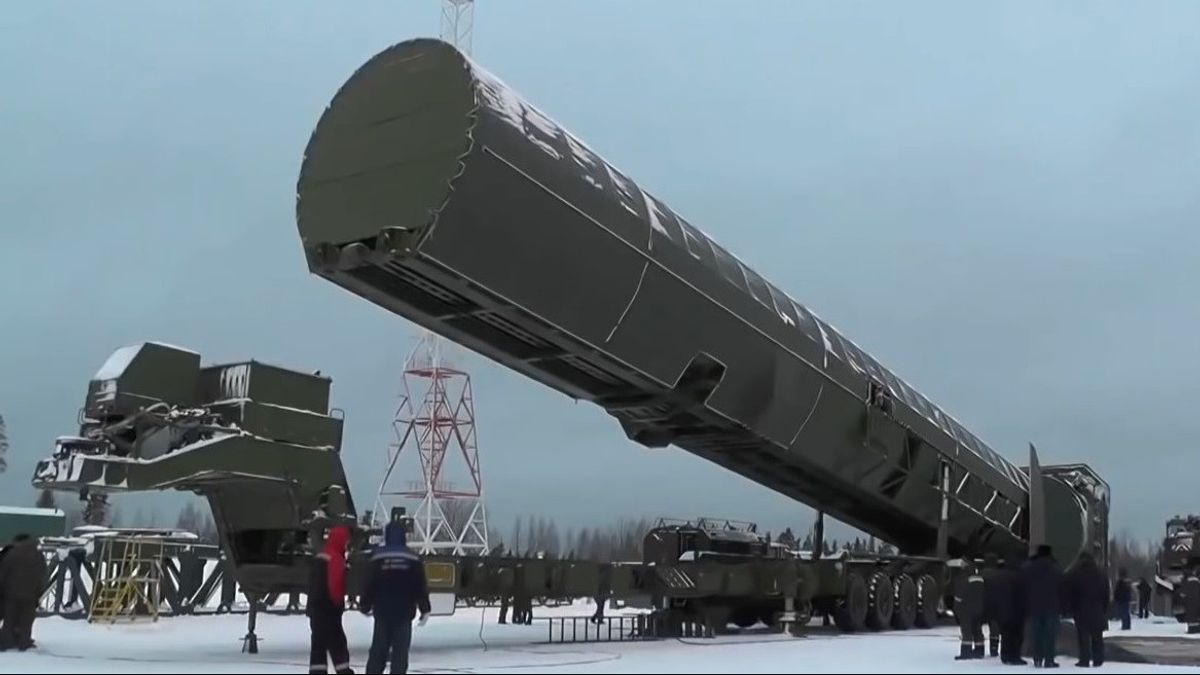 In case you hadn’t heard, the RS-28 Sarmat (РС-28 Сармат) is a nuclear Russian Intercontinental Ballistic Missile (ICBM). It is the successor to the Voyevoda R-36M (what we call the SS-18 Satan), which ironically, was developed and produced in Ukraine.

The first image of the missile emerged in 2016 with the announcement that it would be deployed in 2022 and would replace all of Russia’s surviving Satan missiles. As the most powerful ICBM in the world, the two-hundred-ton beast makes America’s thirty-nine-ton Minuteman ICBM missiles look like play toys, Oh, and the RS-28 went online in 2021, a year earlier than expected.

Putin introduces the RS-28 and puts the world on notice

Vladimir Putin officially introduced the RS-28 Sarmat to Russian in 2018 with this fiery speech about the capabilities of the Satan 2 missile:

“The Ministry of Defense, in conjunction with the rocket and space industry, has begun an active phase of testing a new missile complex with a heavy intercontinental missile. We called it “Sarmat”. This missile system will replace the complex “Voevod”, created in the Soviet Union. Everyone always recognized its mighty fighting power. Our foreign colleagues, as you know, have appropriated it with a very threatening name.

Sarmat will be equipped with a wide range of nuclear weapons of high power, including hypersonic, and the most advanced missile defense systems on earth. The “Voevod” has a range of 11 thousand kilometers – limitations on range are practically nonexistent. As can be seen from the video, the missile is able to attack targets both through the North and South Pole. Sarmat is a very formidable weapon, and because of its characteristics, it cannot be detected by any missile defense systems…”

The RS-28 probably uses the same silos as the old R-36M missile which are dispersed in locations across Russia. Various sources have revealed RS-28’s launch sites are equipped with the “Mozyr” active protection system, designed to negate potential adversary’s first strike advantage by kinetically destroying incoming bombs, cruise missiles and ICBM warheads at altitudes of up to 4 miles. In other words, the silos that house Satan 2 are hardened.

Once launched, the RS-28 uses two stages equipped with heavy liquid-fueled rocket engines allowing it to travel up to 6,800 miles (depending on how many warheads are carried). Not by chance, the distance to the center America from Russia is only 5,800 miles.

And the purported 6,800-mile range might be underestimated. Russia claims the missile can travel nearly 22,000 miles in sub-orbital flight. That pretty much puts it in reach of any spot on earth. In fact, it could circle the earth and bomb the very location it launched from (now, wouldn’t that be funny).

Multiple configurations including a 12-MIRV config

The Sarmat missile can be configured in various ways. It can carry 12 MIRVs (Multiple Independently-Targetable Reentry Vehicles, i.e. nuclear warheads), each with a blast yield of ¾ MT. Or it can carry 15 smaller MIRVs equivalent to 50 millions tons of explosives. Or maybe 24 YU-74 Avangard hypersonic boost-glide vehicles. It depends on Putin’s mood.

Sarmat has “advanced antimissile countermeasures” that allow it to penetrate America’s antiballistic missile shield. In fact, with its short boost phase, it can even evade the US’s infrared sensors such as the U.S. Space-Based Infrared System. It is believed the Sarmat could travel over the South Pole, completely immune to any current missile defense system.

It’s one hell of a bomb

Russia says the RS-28 is “capable of wiping out parts of the Earth the size of Texas or France”. For a reason not disclosed, Russia accelerated development of the missile around 2018. It is believed to now constitute up to 100% of Russia’s fixed land-based nuclear arsenal.

Mine’s bigger than yours, but…

Now that we have you squirming in your seat (and before you scream, “fake news!”), let’s offer an alternative viewpoint. Russia has always gone for power over pose. We’ve seen it with every military system they’ve ever developed and the RS-28 is no exception. It’s big and powerful, yes. But there aren’t that many and it’s almost certainly not as technologically advanced as American-made muscle. Meanwhile, America has hundreds of ICBMs including improved designs that also avoid defense systems. And that’s not to mention new missile-defense systems that can probably outsmart missile-defense-system-avoiding missiles like the RS-28 – maybe before they even make it out of the silo…

Check out pictures of the RS-28 Sarmat in the pictorial gallery below.