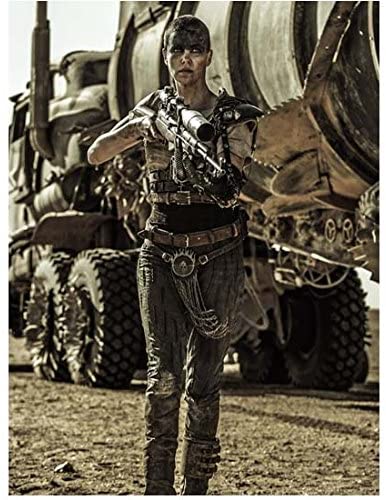 About the Furiosa movie.

Furiosa is a prequel to the Mad Max: Fury Road film. Furiosa debuted in “Mad Max: Fury Road,” where she’s played by Charlize Theron as a war captain serving the villainous Immortan Joe. She ultimately turns against him on a mission to free his imprisoned female breeders. The movie is directed by George Miller.

“As the world fell, young Furiosa is snatched from the Green Place of Many Mothers and falls into the hands of a great Biker Horde led by the Warlord Dementus. Sweeping through the Wasteland they come across the Citadel presided over by The Immortan Joe. While the two Tyrants war for dominance, Furiosa must survive many trials as she puts together the means to find her way home.”

George Miller originally looked into using de-aging visual effects technology so Theron could reprise the role and appear age appropriate for the story.

“For the longest time, I thought we could just use CG de-aging on Charlize, but I don’t think we’re nearly there yet. Despite the valiant attempts on ‘The Irishman,’ I think there’s still an uncanny valley. Everyone is on the verge of solving it, particularly Japanese video-game designers, but there’s still a pretty wide valley, I believe.”

Warner Bros. confirmed October 13, 2020 that Anya Taylor-Joy (Queen’s Gambit star) would be stepping into the role of Furiosa in place of Theron for the “Mad Max” prequel movie. Joining Anya Taylor-Joy in the “Furiosa” cast are Chris Hemsworth and Tom Burke.

And we’re off! Chris Hemsworth announces start of production on Furiosa with a set photo. June 2, 2022

Production of the Furiosa sequel has taken a big step forward today. Several businesses in South Wales, Australia reported they have been contacted by the Furiosa production team as potential shooting locations. In addition, hotels in Murrumbidgee River and Broken Hill areas have been booked by Furiosa for the cast and crew. The Hay Caravan Park stated that enough of its campsites and ensuite cabins have been reserved by the location crew to house up to 50 Winnebago RVs and trailers. It looks like filming may start sometime between March and June.

Warner Bros.’ Mad Max: Fury Road prequel spinoff feature Furiosa has been delayed, moving to an opening date of May 24, 2024, shifting back nearly a year from its previous June 23, 2023 release date.

Furiosa is expected to be the largest production ever made in Australia. August 16, 2021

Word on the street is that the Furiosa prequel will be the largest production ever shot in Australia – at least for now. Director George Miller had the storyline for Furiosa before Fury Road was even shot – and he’s planning on two more sequel ideas beyond Furiosa.