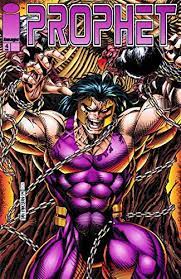 About the Prophet movie.

Prophet is based on the comic book from Deadpool creator Rob Liefeld. It centers on John Prophet (Jake Gyllenhaal), a man who gains superhuman strength after being conscripted by the Germans and subjected to scientific experiments during WWII.

Prophet is now in production with Jake Gyllenhaal attached to star in Prophet. Gyllenhaal will play the lead character known as John Prophet, a homeless and desperate man experimented on by the Germans in the final days of the Second World War, to turn him into a supersoldier. A last-minute change of heart by one of the scientists that were experimenting on him, puts Prophet into a cryosleep that he awakened from years later. The movie will follow Prophet as he awakens in 1965, where his daughter has grown to resent him and the KGB is pursuing him to use him as the basis for their own supersoldiers.

Prophet made his first appearance in 1992 in Image Comics’ Youngblood series before getting his own run of comics starting in 1993. The original series ran until 2000 and was revived in 2012 and took John Prophet to the far future. This run lasted until 2016, with the story of Prophet ending with a series called Prophet: Earth War that ran through 2016.