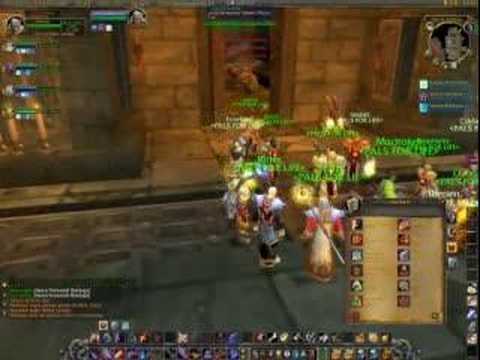 The video was released by the World of Warcraft player guild “PALS FOR LIFE”. It features a group of players discussing a detailed battle strategy for the next encounter while one of their party members, Leeroy (aka Ben Schulz), is away from his computer. Their plan is ruined when Leeroy returns and, ignorant of the strategy, immediately charges headlong into battle shouting his own name in a stylized battle cry. His companions rush to help, but Leeroy’s actions ruin the meticulous plan, and all of the group members are killed.

The Internet phenomenon started with the release of the video clip to the World of Warcraft game forum in a thread titled “UBRS (vid) ROOKERY OVERPOWERED! blue please.”, which jokingly presented the video in a serious context. The thread requested that other players provide help with strategy and that Blizzard reduce the difficulty of the encounter. The video spread as an internet meme, and Leeroy’s response to the other players’ chastisements, “at least I have chicken”, was also much parodied.

The character’s popularity resulted in his inclusion in the World of Warcraft Trading Card Game released on October 25, 2006, with art by Mike Krahulik. A “Leeroy Jenkins” Legendary card was later released in Blizzard’s online card game Hearthstone, as part of the game’s base (“Classic”) set, and using the same art as that of the WoW TCG. Upper Deck Entertainment released a World of Warcraft Miniatures game in late 2008, which included a Leeroy Jenkins figurine. As a reference to Leeroy’s famous claim, the figure is seen holding a chicken leg in his left hand. Blizzard eventually paid tribute to Leeroy within World of Warcraft itself creating the achievement “Leeeeeeeeeeeeeroy!”, which awards the title of “Jenkins” to players who kill 50 of the rookery whelps from the video within 15 seconds.