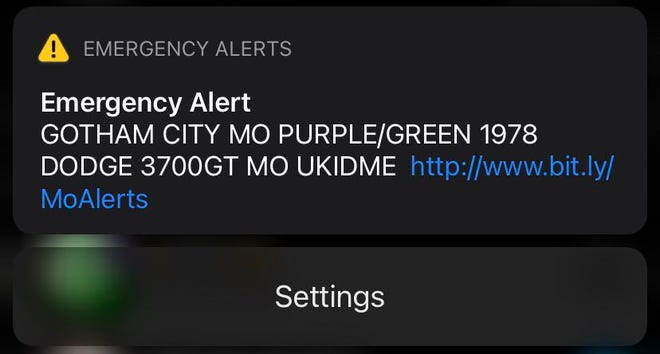 The Missouri Highway Patrol mistakenly sent out a statewide alert to all citizens’ cellphones noting a manhunt for, eh, the Joker?

Those who did not catch on to the “UKIDME” license plate number in the alert, clicked on a link in the text which revealed a more detailed explanation about the subject being sought.

“Authorities in Gotham City, Missouri, are searching for a purple and green 1978 Dodge 3700GT.”

Of course, there is no Gotham City in Missouri, and some citizens likely recognized purple and green are Joker’s traditional colors and a 1978 Dodge 3700GT was the car Joker drove in 1989’s Batman movie. We can only presume weary citizens hunkered behind locked doors while police pursued the wily suspect.

MHP quickly retracted the alert noting that “a routine test of Missouri’s Blue Alert system was inadvertently transmitted statewide.” This was followed by a news release explaining the mistake in more detail.

“During the test, an option was incorrectly selected, allowing the message to be disseminated to the public.”

Attempts to contact the Missouri Highway Patrol were unsuccessful but sources say the red-faced chief is so angry he is demanding the SMS-based service be dropped and replaced with more appropriate Bat-signal technology.