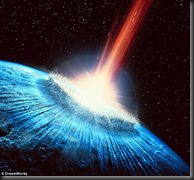 A thousand foot chunk of rock, named Apophis, is on schedule to buzz the Earth on April 13, 2029.  For those superstitious types, that’s Friday the 13th.  Apophis is expected to pass a mere 23,600 miles from Earth which is a “close call” by astronomical measurements.  In 2004, scientists were calculating a 2.7% probability that it would strike the Earth and classified it as a Level 4 threat (level 8 means a strike eminent) but they have since changed that guesstimate.  Now they are not as worried about a direct strike in 2029.  Furthermore, if the trajectory has been accurately estimated, Earth should be just fine in 2036 when it loops around and returns for another shot at us (again on April 13).  But if astronomers misestimated the 2029 pass, there is a chance (72,000 to 1) that Apophis could impact Earth in 2036.  Hit or miss, Apophis definitely has Earth in its sights and NASA is already working on methods to deflect it.  Should we be worried?  The impacts which created the Barringer Crater and the Tunguska event are estimated to be in the 3–10 megaton range.  NASA has estimated that a Apophis strike event would measure 510 megatons – the equivalent of more than 20 hydrogen bombs exploding simultaneously!

Astronomers plan to observe Apophis in 2013 using the giant radio telescope at Arecibo and calculate a more accurate trajectory.  This calculation should allow them to predict its path out to the year 2070.