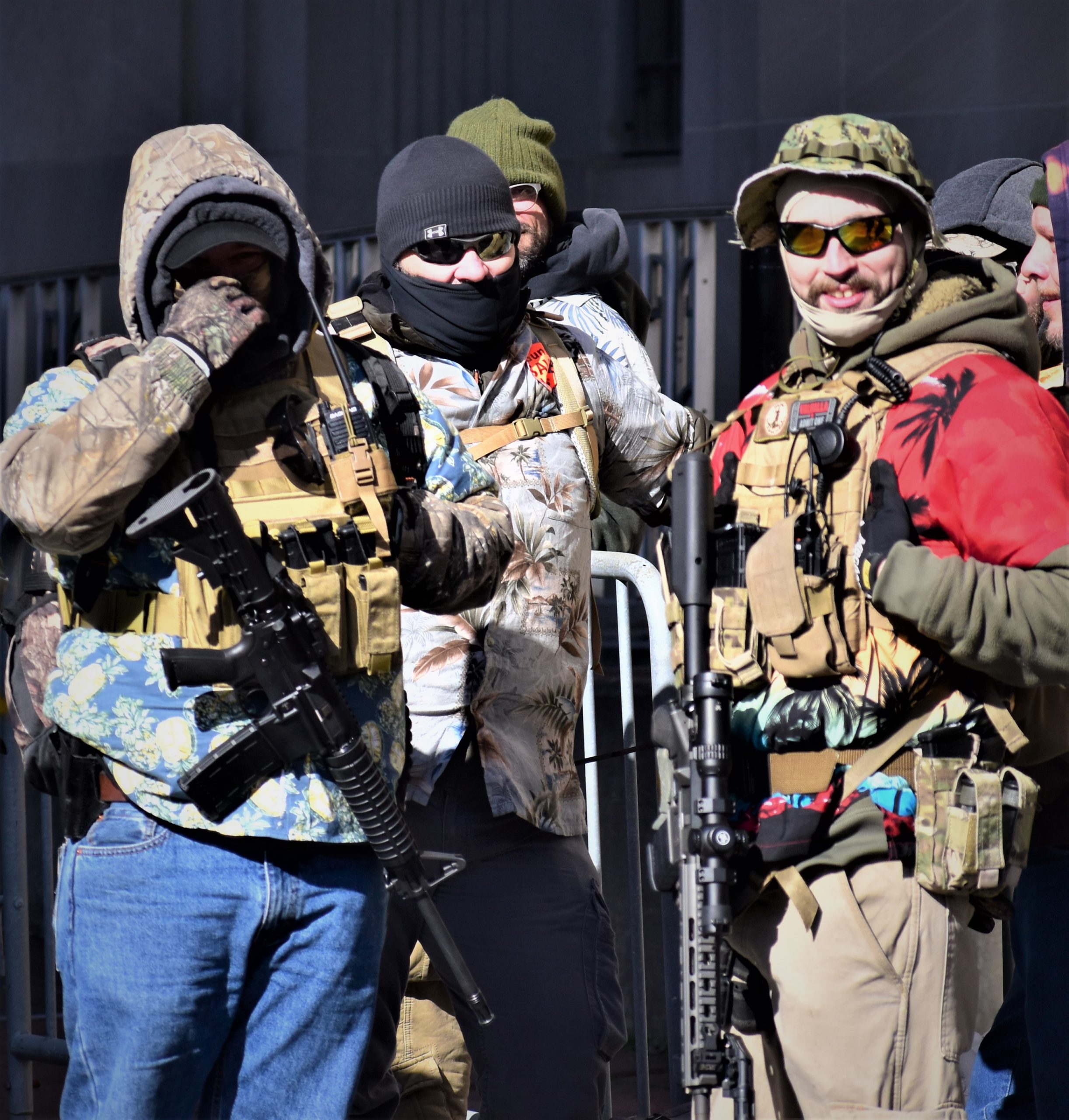 I found most of this in a US National Counter-Terrorism Center report. Pretty interesting analysis of the Boogaloo movement.

In recent weeks, the term “Boogaloo” has gone more mainstream after months of growing popularity in online anti-government communities. Since the nationwide backlash against COVID-19 lockdowns and the beginning of Black Lives Matter (BLM) protests, terrorism experts and researchers have also seen Boogaloo supporters disrupted for suspected violent extremist activity in Las Vegas and Texas and at least two deaths allegedly attributed to a Boogaloo supporter in California.

So, what is Boogaloo?

Generally, Boogaloo supporters are not part of a defined group but identify with a concept. Most ascribe to anti-government and anti-police ideologies, and are against groups that disagree with their political views. For example, in response to perceived government overreach, most Boogaloo supporters anticipate and prepare for, and in some cases hope for or seek, a future civil war. Some Boogaloo adherents support the current BLM protests and try to make common cause with others they perceive as angry at police. A minority faction of Boogaloo supporters are white supremacists, but that minority often defines Boogaloo as a race war, which the majority of supporters do not.

The Boogaloo meme that has crystallized as an “irl” (in real life) movement of heavily armed protesters started with the phrase, “Civil War 2: Electric Boogaloo”, patterned on the title of the 1984 sequel to the breakdance film, “Breakin’.” Internet users for some time used “Electric Boogaloo” as a humorous appendage in various contexts and memes, and—in some subcultures—in discussions about the possibility of civil war.

The 4chan image board platform, /k/, devoted to weapons, helped popularize the latter usage of the term, which followers are now leveraging via Facebook and other popular platforms. Third party Internet archives show the phrase “Civil War 2: Electric Boogaloo” was in use on /k/ as early as 2012 although there was scattered use of the phrase in unrelated contexts online before this date.

Since 2018, the frequency of the use of the phrase has increased. According to researchers at Bellingcat, some posters on /k/ have suggested that Boogaloo-related memes were co-opted by more mainstream segments of the Internet, including Reddit, Twitter, Instagram, and Facebook users. Research by the Tech Transparency Project shows that there were at least 125 Facebook groups devoted to the Boogaloo by late April 2020. The real number has increased significantly since then, although determining an exact number is difficult due to the rapid evolution of the subculture.

“Boogaloo” has been further disguised with the use of soundalike terms like “big luau,” “big igloo,”and “icehouse.” For example, playing off the “big luau” term, Hawaiian shirts became a way for individuals to signify their anticipation of the alleged “coming civil war.”

Some fringe Boogaloo supporters have appeared at rallies wearing skull-print balaclavas, traditionally associated with “siege culture” influenced by the American author of Siege, an anthology or complication of newsletters published in book form in 1982 and which is often cited by anti-government or racially/ethnically-motivated violent extremists. For example, an individual at a 15 April Lansing, Michigan protest was photographed wearing a Hawaiian shirt which typically references “the boog” and a skull mask referencing siege culture. The clown nose signifies the belief that there is no political solution to what many accelerationist groups see as the perpetual decline of western democracies. The nose was very likely a nod to the “clown world” meme signaling the idea that pluralistic, multicultural liberal democracies are both inherently ridiculous and doomed to failure.

According to recent press reporting and researchers, white supremacist elements were attempting to co-opt the anti-lockdown protests as well as the broader Boogaloo movement. According to researchers, Boogaloo-focused Facebook groups regularly discuss perceived tyrannical gun control legislation as an acceptable pretext to violent resistance.

Boogaloo supporters view the government’s reaction to BLM protests as an expression of government tyranny. However, the same researchers have identified that there appears to be an active struggle within some parts of this movement as to, whether or not, their aspirational uprising will or should be based in bigotry.

Duncan Lemp, 21, has become the preeminent martyr of the Boogaloo movement. On 12 March, a Montgomery County, Maryland, SWAT team executed a no-knock raid on the Lemp family home. Lemp was suspected of owning firearms he was not legally permitted to possess due to a juvenile criminal record. The Maryland police alleged Lemp “confronted” them while armed, and he had booby trapped his door with a shotgun shell. Lemp’s family claims he was shot dead while sleeping with his girlfriend, who was allegedly wounded in the raid. Lemp supporters believe he was murdered.

According to associates, Lemp posted on a social media site for militia enthusiasts with one post noting Lemp was “an active III%’r and looking for local members & recruits.” Some “Boogaloo bois” regularly compare Lemp with Black Americans who were shot dead by police officers. A growing subset of Boogaloo supporters see Black Americans, like now deceased George Floyd, Ahmaud Arbery, and Eric Garner, as fundamentally the same sort of victims as Lemp, now deceased Vicki and Samuel Weaver (who died in the 1992 Ruby Ridge, Idaho standoff ), and now deceased LaVoy Finicum (who was shot and killed during the 2016 Malheur National Wildlife Refuge, Oregon stand-off*).

This sentiment is not universally held within the Boogaloo movement. Whether or not to view deceased Black Americans as victims along the same lines as Lemp is one of the fissures that runs through the Boogaloo community. Regardless of how Boogaloo movement supporters feel about non-white victims of police violence, Lemp seems to be universally regarded as a martyr within these circles and variations of the phrase “His name was Duncan Lemp” are commonly repeated in memes and as comments on posts.

Boogaloo-themed Facebook groups show the common thread uniting the Facebook groups was their alleged “desire to fight it out with the government. More specifically, members envision violent confrontations with local police and the “alphabet bois” in federal law enforcement agencies.” Red Flag laws—state laws that authorize courts to issue a special type of protection order, allowing the police to temporarily confiscate firearms from people who are deemed by a judge to be a danger to themselves or to others—and gun confiscation are frequently cited as grounds for a hypothetical insurrection.

For example, in April, Boogaloo supporter Aaron Swenson, 36, was arrested by Texarkana, Texas police for having livestreamed threats to execute police and was later indicted for several felonies including attempted capital murder of a peace officer. On 1 May, Bradley Bunn, 53, in Loveland, Colorado was arrested for allegedly possessing pipe bombs. One Boogaloo Facebook user posted, “It begins”, likely referring to confiscations.

On 30 May, three men who self-identified as being part of the Boogaloo movement were arrested and later charged and indicted for conspiracy to cause destruction during protests in Las Vegas, and possession of an unregistered destructive device. Also on 30 May, two alleged Boogaloo supporters were charged with inciting a riot by throwing a water bottle at law enforcement officers at a George Floyd protest that day in Columbia, South Carolina.

As of 13 June, a Boogaloo movement supporter from Lancaster, Texas, was arrested on drug charges. The criminal complaint noted he also used his social media accounts to advocate vigilante “guerrilla warfare” against the National Guardsman patrolling BLM protests, claimed to be “hunting Antifa,” and threatened to “kill” looters.

On 16 June, DOJ charged Steven Carrillo, 32, with murder and attempted murder charges for his alleged shooting death of a Protective Service Officer and the injury of his partner at a federal building and US courthouse in Oakland, CA, on 29 May. On 6 June, Carrillo also allegedly killed one Santa Cruz County deputy sheriff, and injured another before he was apprehended. Robert Alvin Justus, 30, faces aiding and abetting charges for both murder and attempted murder, stemming from the 29 May incident involving Carillo. According to a criminal complaint, both Carrillo and Justus were Supporters of the Boogaloo movement.

Is the movement legit?

On 17 June, Stephen Parshall*, 35, Andrew Lynam*, 23, and William Loomis*, 40, were indicted by county and federal grand juries in connection with an alleged conspiracy to cause violence during Black Lives Matter protests. All three were supporters of the Boogaloo movement.

On 16 June, the US Department of Justice announced murder and attempted murder charges against Steven Carrillo*, 32, the alleged shooter in a 29 May shooting at a federal courthouse building in Oakland. His alleged accomplice, Robert Alvin Justus*, 30, faces aiding and abetting charges for both the murder and attempted murder. According to the criminal complaints, Carrillo and Justus were supporters of the Boogaloo movement.

NEW YORK: Soldier Planning To Attack Members of His Unit Charged With Terrorism

On 22 June, New York authorities announced the unsealing of an indictment charging Ethan Phelan Melzer*, 22, for allegedly planning an attack on his US Army unit by sending sensitive details about the unit—including information about its location, movements, and security—to members of the extremist organization Order of the Nine Angles (O9A), an occult-based neo-Nazi and racially motivated violent extremist group.