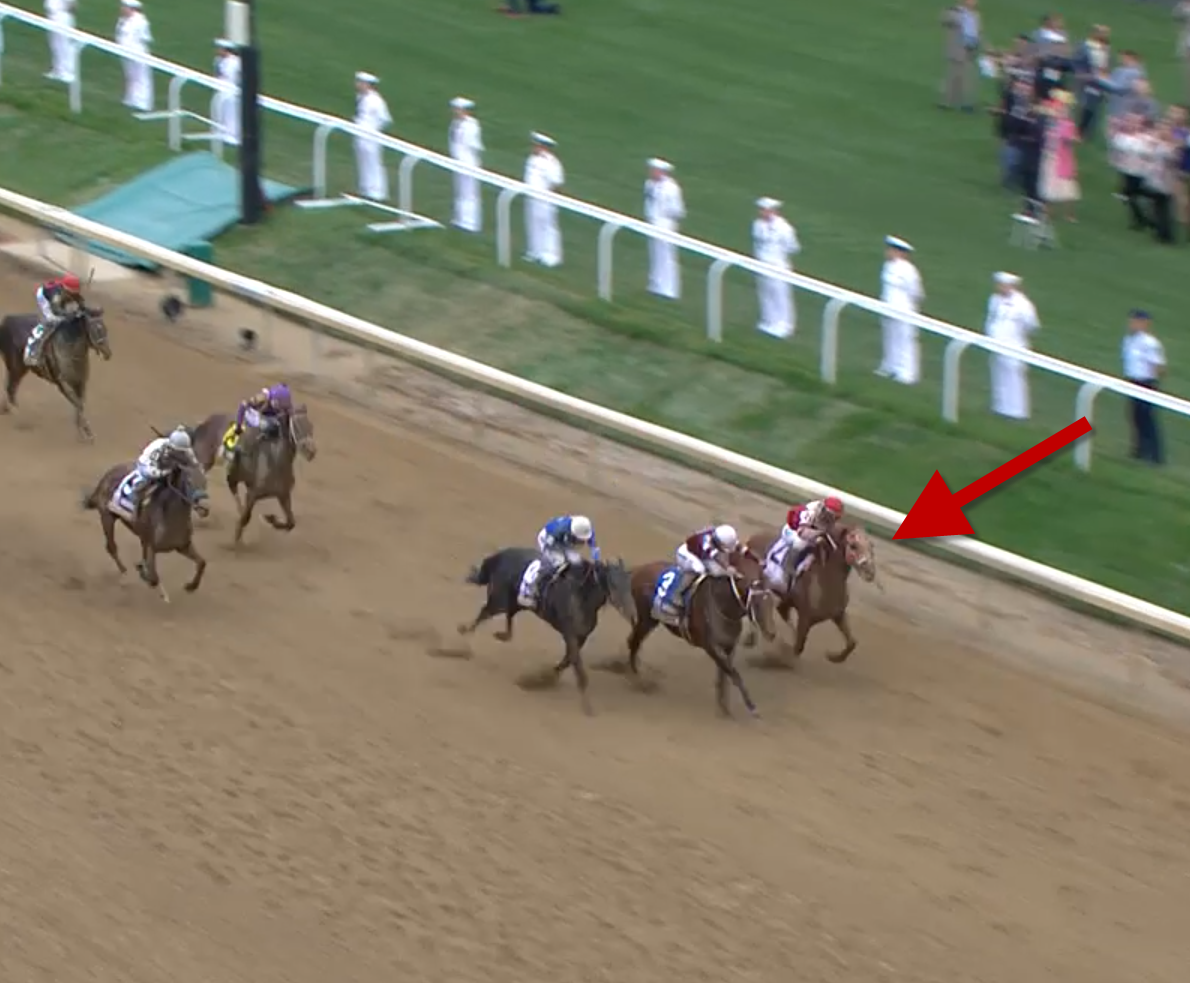 80-1 horses don’t win races. Horses in a 20-entry race that start in the farthest gate don’t win races. Horse so far down the ladder that the only way they get into the race is when another horse withdraws don’t win races. And certainly horses that have only won a single race in their lifetime and were claimed for a mere $30K a few months prior don’t win the Kentucky Derby. But Rich Strike did. Here’s how he did it.

A bad start gets even worse

Rich Strike already had to run farther than anyone else in the race. He started from the outermost gate, gate 20 (numbered “21” after the original #20 withdrew from the race the day prior). In fact, when 17, 18, 19 ran clumsily into each other after exiting the gate (it looked like a Three Stooges skit, nyuk, nyuk, nyuk), Rich Strike was forced even wider to avoid the melee.

A quick cut inside reduces the distance

In last place, Rich Strike smartly cut inside to shorten the distance he had to travel around the track (riding the rail is a common tactic in horseracing). From there, Rich Strike remained in the back of the pack, running 18th out of 20 into the first turn.

Ironically, trailing the pack was a position Rich Strike was comfortable with. He’s known as a “closer”, a horse that likes to trail the pack, then break into a sprint when they feel the lead horses have tired themselves out and are no longer a threat. Closers rarely win, but when they do, boy is it a sight to see.

A blistering fast early pace tires out the leaders

Rich Strike ran 2-wide on the first turn, 17 lengths behind the leader. After the first turn, he entered the backstretch and passed a single horse by a nose to move into 17th place. The announcer beamed with excitement over the “merciless pace” of the race. In fact, a new Kentucky Derby speed record had been set. The pace was blazing fast – maybe even fast enough to tire out the dueling leaders – another advantage for a closer like Rich Strike.

A horse pulls up and opens the inside rail

As they entered the final turn, Rich Strike began to accelerate when more luck unraveled before him. Riding on the inside rail, Summer is Tomorrow (#4) inexplicably pulls up raking a few horses behind him but more importantly, opening a huge gap in the inside rail for Rich Strike to step into. He was now in 15th place.

The pack decides to all swing wide at the same time

Rich Strike was jammed up back in 15th place when the pack ahead of him swings comically wide as they enter the homestretch. This movement takes some of the leaders more than 8-wide while Rich Strike stays comfortably in the inside lane. Just like that, the shape of the race and position of the horses changes, moving Rich Strike up several positions. Now in 10th place, the closer begins to sprint as the finish line looms ahead.

Another horse pulls up and Rich Strike gets stage fright

As they enter the homestretch, it looks like Rich Strike will hug the rail but the horse ahead of him (Messier) suddenly pulls up, causing the jockey to snap Rich Strike’s head to the right to steer him outside and around.

The camera shows Rich Strike’s head held in an awkward position, facing the other horses – and the crowd. He continues to run with his head cocked oddly to the side, keeping an eye on the crowd as he begins to accelerate.

We’ll never know for sure what went through Rich Strike’s mind in those last few feet. Jockeys do know fear makes a horse run faster. After all, that’s why they strike them with a whip to summon more speed. You see, horses are not predators so their reaction to danger is to run. Maybe Rich Strike was spooked by the roar of the crowd and even the blinkers he wore couldn’t focus him on the race ahead of him. Or maybe he remembered #2 from an old feud and decided today was the day to even the score. Whatever the reason, just like that, a $30,000 claiming horse became a million-dollar baby.

Did fear drive Rich Strike to a historic win?

How do we know Rich Strike was afraid? Firstly, you can clearly see it in his eyes as the cameras capture Rich Strike running down the homestretch, the only horse with his head twisted awkwardly toward the grandstands. Look at the horses below. See the eyes on the horse on the left? That’s determination. Contrast to Rich Strike’s eyes on the right. That’s fear.

Secondly, the “lather” on his coat is clearly visible after the race. Horses sweat just like people, but if they sweat excessively, it lathers, like soap suds. This is often caused by nervousness. In fact, a horse in full lather before the race is a sign of fear and a warning flag for experienced handicappers.

Rich Strike’s state of mind was further emphasized when he attacks the lead pony after the race, biting his neck and body while its rider does his best to fight Rich Strike off (how would you like to win the Kentucky Derby only to get punched in the face). Horses commonly bite other horses if they feel scared or threatened. It’s a defensive move, made out of fear.

A variety of factors contributed to Rich Strike’s historic win. In a way, the stars aligned in a once-in-a-lifetime manner that allowed the underdog to win the world’s most prestigious horse race. Some unusual strategic moves by opponents, a blistering pace that tired favorites out, a lot of luck, and a bit of skill turned an 80-1 longshot’s race into the biggest Kentucky Derby upset since 1913.