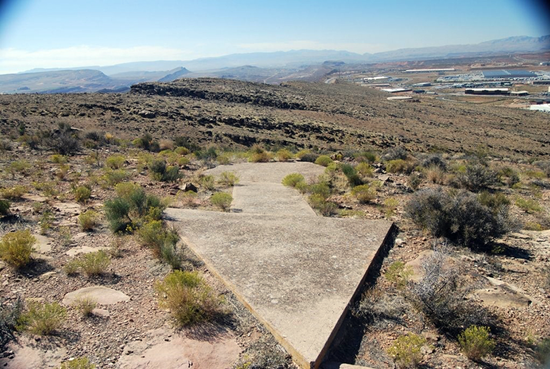 You’ll find them in a nearly straight line between the East Coast (New York) and the West Coast (San Francisco). Like an ancient cosmic map, they are spaced about 15 miles apart and placed on any available surface – the side of a mountain, across the desert floor, and in the great, flat plains of the central United States – anywhere where they can be easily seen from space. Although many are now covered with scrub brush, these giant concrete arrows, sometimes as much as 70 feet in length, leave backpackers and hikers who stumble across them scratching their heads. What are they? Where did they come from? Who scattered them across the USA?

The giant arrows are remnants of the Transcontinental Airmail Route, a sequence of sequentially lighted beacons and giant arrows funded by Congress in 1923 to aid pilots navigating across the United States. Prior to their construction, pilots navigated across the country by picking their way from visible landmark to visible landmark, a method that proved troublesome in vast areas of empty, repetitive desert or remote mountainous regions. The job proved dangerous with nearly 1 in 10 early airmail pilots dying in plane crashes. Thus, the lighted airway beacons were a significant aid to pilots in an era before radio navigation was possible.

The transcontinental airmail stations consisted of huge rotating beacons mounted on 53-foot towers and spaced ten miles apart. Most of the facilities used huge bright-yellow concrete arrows pointing in the direction of the next tower. The beacons themselves flashed a code to identify each beacon’s unique identification number. When visibility was good, light from the next beacon could be seen by the pilot. Each arrow pointed to the next station, a feature that helped keep pilots on course if weather obscured the light from the next lit beacon.The first segment of the Transcontinental Airmail Route was built between Chicago and Cheyenne, Wyoming. By the end of 1925, the 2,665-mile lighted airway between New York and San Francisco was completed. By 1927, the lighted airway between New York and Salt Lake City, Lost Angeles to Las Vegas, Los Angeles to San Francisco, New York to Atlanta, and Chicago to Dallas (4,121 miles in total) was completed. By 1933, the Transcontinental Airway System totaled 1,500 beacons covering 18,000 miles. However, their usefulness quickly faded.

By the end of the 1930’s, radio guidance and radar helped eliminate the need for the beacons and thus, during World War II, many of the beacon towers were removed to prevent aiding enemy bombers in navigation. However, hundreds of the giant arrows remain scattered across the United States leaving bewildered backpackers to find the remnants of the long-gone, marvelous highway of light.

Many people make a hobby of hunting for and finding these long-lost beacons.  Below is a NGS datasheet documenting the location of one of the beacon towers and arrow.

Should you wish to witness these arrows yourself, you may view a complete list of known locations of Transcontinental Airmail Route beacons and concrete arrows here.  The list contains the station name, county, and GPS coordinates of the site.