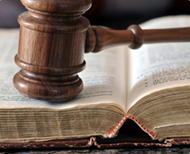 Books bound with human skin in the Harvard Library collection? According to Harvard’s Directory of University Libraries, “without extensive genetic testing, Harvard librarians still do not have the foggiest notion of how many volumes wrapped in human hide exist throughout the system.” But they have identified three books that yes, are bound with real human skin – and they’re not the only library that houses such gruesome works.

A Spanish law book, entitled “Practicarum quaestionum circa leges regias Hispaniae”, is described as “delicate, stiff, with wrinkled edges, the skin’s coloring subdued yellow, with sporadic brown and black splotches like an old banana.” It sits on a Harvard library bookshelf available for anyone to check out.  Nothing about the old book suggests its binding is anything other than old worn leather. But, if you turn to page 794, you will find the following brow-raising revelation written in purple ink:

“The binding of this book is all that remains of my dear friend Jonas Wright, who was flayed alive by the Wavuma on the Fourth Day of August, 1632. King Mbesa did give me the book, it being one of poor Jonas chief possessions, together with ample of his skin to bind it. Requiescat in pace.”

The Wavuma mentioned by the author are believed to be a tribe of African villagers located near modern day Zimbabwe.  How the Wavuma came to kill poor Jonas is unknown but recent tests on the well-worn manuscript confirm that indeed, the covering is human skin.

Little is known about the second human skin-bound book in Harvard’s glorious halls but what we do know is that in Harvard’s Countway collection, a 1597 French translation of Ovid’s “Metemorphoses” includes this notation penciled on the inside cover: “Bound in human skin”.  Careful examination of the cover reveals a leathery, porous type material, freckles and all.  Human skin?  Harvard librarians seem to think so.

Collection of essays bound with skin of dead mental patient

In Harvard’s Houghton Collection, you will find “Des destinées de l’ame”, written by Arsène Houssaye, a collection of essays espousing the virtues of the human spirit. Notes from the volume’s description reveal that the binding’s skin comes from “the back of the unclaimed body of a woman patient in a French mental hospital who died suddenly of apoplexy.”

The books biographical notes further reveal that the author gave the book to a friend, Dr. Ludovic Bouland, a renowned medical doctor and bibliophile, with a profound note explaining that “a book on the human soul merited that it was given a human skin.”  Houssaye bound the book with skin from the unclaimed body of a female mental patient who had reportedly died of a stroke. Indeed, the volume is described as having a binding that has “a greenish-gold hue as well as visible pores”. Inside the volume the note reads in its entirety (translated from French):

“This book is bound in human skin parchment on which no ornament has been stamped to preserve its elegance. By looking carefully you easily distinguish the pores of the skin. A book about the human soul deserved to have a human covering: I had kept this piece of human skin taken from the back of a woman. It is interesting to see the different aspects that change this skin according to the method of preparation to which it is subjected. Compare for example with the small volume I have in my library, Sever. Pinaeus de Virginitatis notis which is also bound in human skin but tanned with sumac.”

Although macabre (and revolting), binding books in human skin, known as anthropodermic bibliopegy, dates back at least to the 16th century when it was a somewhat common practice. A French Bible, published in the 13th century, is the earliest known example of anthropodermic bibliopegy so potentially the practice could be much older.  There are believed to be thousands of human skin-bound books in existence and  Harvard is not the only school to house such gruesome manuscripts within its library walls. Brown University’s John Hay Library contains three books bound in human skin and the Mutter Museum in Philadelphia has an entire collection of skinbound books.

Outside of the Harvard collection, here are a few other notable human-hide bound books.

The Gunpowder Plot of 1605, in which participants tried to kill King James I of England and much of the English court, did not end well for the conspirators. The participants in the attempted coup, including Guy Fawkes (the Anonymous mask guy), were captured and summarily executed. One of the co-conspirators, Father Henry Garnet, was flayed (skin peeled off) and his skin used to bind the book, contemptuously titled, Severe Penitence Punished the Flesh. It is said that the outline of Father Garnet’s twisted face is still visible on the cover (see below).

The Red Barn Murder occurred in Suffolk, England in 1827. The saga began when a young woman, Maria Marten, became pregnant while out of wedlock (which was deemed particularly horrific in those days). To avoid scandal, she planned to meet her suitor, William Corder, at a local Red Barn so they could run off and elope. Instead, the dastardly young lad shot and killed Maria. The trial of William Corder became a national sensation and after Corder was found guilty and executed, his remains became unceremonious fodder for the local medical industry. His body was dissected for practice and his skeleton sold as a teaching tool for schools. His skin was tanned by a surgeon named George Creed and used to bind a “true crime” account of the scandal and subsequent murder. Inscribed within its covers is this matter-of-fact explanation:

“The Binding of this book is the skin of the Murderer William Corder taken from his body and tanned by myself in the year 1828. George Creed Surgeon to the Suffolk Hospital.”

James Allen was convicted and sent to prison after trying to rob a local man, John A. Fenno, on the Massachusetts Turnpike. During the attempted robbery, Fenno bravely resisted Allen’s attack, even shrugging off a gunshot wound that should have killed him. Not only did he fight him off and stop Allen from robbing him, Fenno helped transport Allen to the authorities. What was discussed during the trip to police headquarters must have made quite an impact on Allen.  Nearing his death, Allen requested that a copy of his memoir, which had been transcribed by the prison warden, be bound in his skin and given to Fenno. The cover of the book has the inscription “Hic Liber Waltonis Cute Compactus Est” which translates to “This book by Allen bound in his own skin.”

“The cover of this book is made from the leather of the human skin.  The Aguadilla tribe of the Mayaguez Plateau region preserves the torso epidermal layer of deceased tribal members. While most of the leather is put to utilitarian use by the Aguadillas, some finds its way to commercial trade markets where there is a small but steady demand. This cover is representative of that demand.”

Below are more photos of various literary “works of art” that are bound with human skin.