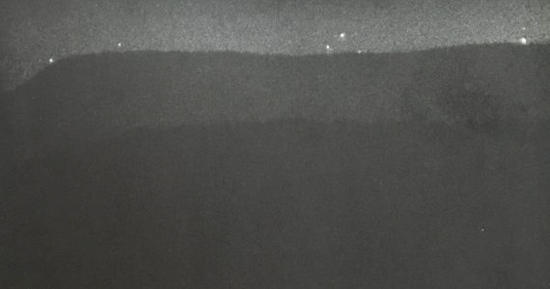 The enduring mystery of the mysterious Brown Mountain Lights

The Brown Mountain Lights are found in the North Carolina foothills of the Blue Ridge Mountains on a low ridge known as Brown Mountain. The dancing, glowing spheres of red, blue, yellow, or green light, typically appear on brisk, fall evenings.

The mystery of Brown Mountain’s ghost lights has endured for hundreds, maybe even thousands of years, and the phenomenon has been witnessed by a countless number of people. Law enforcement officials and Forest Service officers have seen the lights up close and described them as beach-ball size orbs that float by and then vanish. Witnesses from afar say the lights appear to rise up off the mountaintop, hover, wobble, and then disappear. Despite organized research of the phenomena, scientists still can’t say what the Brown Mountain Lights really are.

Souls of Cherokee women searching for their mates

The first known accounts of the Brown Mountain Lights heralded from natives of the area – the Cherokee tribe. Cherokee have been aware of the lights as far back as 1,200 AD and believe the lights are the souls of Cherokee women searching for their men who died in battle.

In 1771, German surveyor G.W. de Brahm witnessed the lights and wrote of the encounter. Brahm theorized that the lights were “nitrous vapors which are borne by the wind.” According to Brahm, as part of a natural geological process, the mountain releases nitrous gas which floats upward and then combusts with the surrounding air (how the ignition supposedly occurs was not explained).

On September 24, 1913, the Charlotte Daily Observer reported the story of a fisherman who claimed to have seen “mysterious lights just above the horizon”. The fisherman explained that he’d seen the lights nearly every night. He described the lights as being red in color and circular shaped.

As a result of the report, the US Geological Survey sent employees to the area to investigate. They determined that the fisherman had seen train lights that had been activated by peculiar air currents moving about on the mountain’s ridge. Shortly after the investigation, a massive flood hit the area washing out bridges and knocking out electricity throughout the area. The flood stopped the trains from running too – but people continued to report mysterious lights on Brown Mountain.

Smithsonian and US Weather Bureau investigate the lights (1919)

In 1919, the Smithsonian Institution and the United States Weather Bureau investigated the lights. They concluded that the Brown Mountain lights were the same sort of phenomenon exhibited over the Andes Mountains in South America. However, they could provide no scientific explanation for how the lights were produced.

A report in 1950 provided a wonderful eyewitness description of the Brown Mountain Lights. According to the witness:

“When the lights appeared, they put on quite a show. They moved around. They rose up into the air and some of them would split in two. I might never be able to find what I saw again, but I know trains don’t wander around and split in two. And it certainly wasn’t fireflies!”

In 2011, a woman got an up close and personal look at the lights. The young lady and a group of friends were at Wisemen’s View when one of the mysterious lights appeared just ten feet from her. According to the woman:

“It was this large [woman holds hands apart illustrating the size] – the size of a basketball. It was a yellowish light, and it had an aura around it. I didn’t feel any heat coming off of it. It didn’t have an odor. Everybody started backing up when they saw it.”

One of the most reliable reports occurred in 2012 when a group of atmospheric science students from nearby Appalachian State University were gathered near Highway 181 (mile marker 20) to witness the Brown Mountain lights firsthand.  To their delight, they saw dozens of “amber yellow globes of light lifting off the mountain”.  They say the lights gained altitude then leveled off before drifting away towards the north.

What are the Brown Mountain Lights?

A variety of natural phenomena have been suggested as causes for the lights which in many ways, behavior similarly to the infamous Marfa Lights in Texas. Some have theorized the lights are will-o’-the-wisp lights – swamp gas. However, there are no swamps or swamp-like conditions on Brown Mountain.

Others have suggested ball lightning, a natural phenomenon reported since antiquity yet still little understood.

Some locals feel the lights are a naturally-occurring electrical discharge caused by the movement of a geological fault line below the mountain. In other words – earthquake lights.

Regardless, despite extensive investigation, scientists have found no definitive cause for the lights.

Some believe the lights are nothing more than reflections from Rattlesnake Knob, a populated area in Lenoir about twenty-two miles east of Brown Mountain. This has been partially substantiated by a May 1977 experiment conducted by the Oak Ridge Isochronous Observation Network (ORION). Scientists placed a bright 500,000 candlelight on a hill located several miles away from Brown Mountain. Witnesses could indeed see a reddish glow on Brown Mountain, light reflected from the true source in Lenoir. However, lights have been reported on Brown Mountain long before electricity, in fact, long before Lenoir was even populated.

That people go missing on Brown Mountain is without question. There are many reports of people disappearing atop the mountain including one widely reported incident in which a group of people vanished with no explanation. Ironically, it has been pointed out by locals that cases of missing persons typically occur when the Brown Mountain lights are most active.

The lights from a slave’s lantern

One story, widely disseminated in the area by the locals, was recorded in a 1950’s-era song, Brown Mountain Light (performed by Lulu Belle and Scotty). The story says a man and his slave were hunting atop the mountain when the man simply disappeared. The slave returned night after night with his lantern searching for the man. The man is never found. According to folklore, the slave returns to the mountain every night with his lantern to search for his owner – continuing the search from beyond the grave.

The ghost of a murdered woman

Another popular explanation dates back to the early 1800’s, when a woman disappeared on the mountain. It was thought that her husband murdered her. Residents of the area formed a search party and scoured the mountains looking for her body. On that night, the torchlights of the searchers could be seen from miles away. Shortly after the search, the woman’s husband disappeared too. About a year later, a woman’s skeleton was found on the mountain. That week, lights appeared all over the mountain and have been making their appearance ever since.

Catching a glimpse of the Brown Mountain Lights is a touch-and-go prospect. The best time to view is on dry, crisp evenings in the Fall from September to early November. On NC Highway 181, they may be viewed from Blue Ridge Parkway at mile markers 301 (Green Mountain Overlook) and 310 (Brown Mountain Light Overlook). Another popular vantage point is Wisemen’s View, about four miles outside of Linville Falls, North Carolina.

Check out a video compilation of the Brown Mount Lights below.