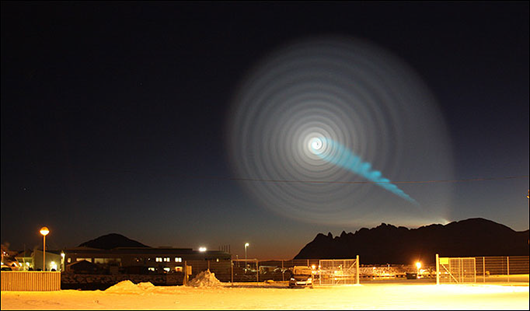 It is not uncommon to see unusual lights in the skies of Norway.  The Hessdalen Lights have been reported in Norway since the 1800’s.  But in 2009, a light was spotted in the skies above Norway that made other glowing-light UFO sightings pale by comparison.  Called the “Norwegian spiral anomaly” or “Star Gate”, the UFO was visible to thousands of awe-struck Norwegians and photographed extensively, from Norway to Sweden.  The event occurred on December 9, 2009 and lasted from 2-3 minutes (some sources say it lasted up to 10 minutes).  It consisted of a blue beam of light that came from behind a mountain with a grayish spiral-shaped hue of light emanating from it.

According to local news sources:

“Witnesses across Norway, who first glimpsed the space show at 8.45am, all described seeing a spinning ‘Catherine wheel-style’ spiral of white light, centered around a bright moon-like star. A blue “streaming tail” appeared to anchor the spiral to earth, before the light “exploded” into a rotating ring of white fire.”

One witness described the sighting as follows:

“It consisted initially of a green beam of light similar in color to the aurora with a mysterious rotating spiral at one end….this spiral then got bigger and bigger until it turned into a huge halo in the sky with the green beam extending down to the earth.  According to the press, this could be seen all over northern Norway and must therefore have been very high up in the atmosphere to be seen hundreds of km apart”

At first, the world’s top scientists and the military experts admitted they were baffled as to what the light may have been.  Norway’s most celebrated astronomer, Knut Jorgen Roed Odegaard, said he had never seen anything like the spiral before.  Chief Scientist Erik Tandberg, at the Norwegian Space Centre, said that he too was “totally amazed” by the spiral.

“I agree with everyone in the science community that this light was the weirdest thing.  I have never seen anything like this – ever.”

Later, theories sprung forth from detractors who speculated that the spiral anomaly was a Russian missile that flew out of control (Norway would have been notified of any missile tests and even Russia at first vehemently denied this claim), a fiery meteor (the event lasted much too long to be a meteor), or a rare, never-before-seen variant of the Northern lights.

Below is a Norwegian news report of the event with a small segment of actual video.