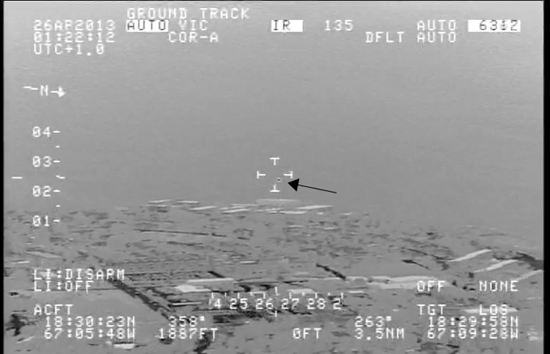 One of the most interesting UFO sightings to date came out of Aguadilla, Puerto Rico when, on April 25, 2013, at 9:20 PM, an unknown, high-speed object began flying near the Rafael Hernandez airport. The unknown object so alarmed airport personnel that a departing FedEx commercial plane had to be delayed for several minutes until the object flew out of range. Fortunately, at the time of the sighting, a U.S Customs and Border Protection aircraft was in the area and caught the entire event on the aircraft’s on-board infrared video. The event would have remained secret except only a few months later, in October 2013, an official source (the source was identified and vetted but wished to remain anonymous) leaked the video.

The video is unusual in that the UFO is filmed entering and exiting the water at high speed. In the three-minute video (see video below), you can see the object flying into northwestern Puerto Rico from the Atlantic Ocean, flying around the airport area for over two minutes, then returning to the Atlantic Ocean where it appears to repeatedly submerge itself into the water.

The thermal video was taken from a DHC-8 Turboprop winged-aircraft operated and flown by the U.S. Department of Homeland Security. Pilots of the aircraft had just taken off on a routine mission when they noticed a pinkish, reddish light over the ocean approaching the area from the North. At first the crew were alarmed because air traffic control had not warned them that there was another aircraft in the area. The crew contacted the tower who made a visual confirmation of the object and shut down all traffic on the airport’s runways. The crew noted that once the object reached the shore, it extinguished its lights. It was at this point that the crew began filming the object using their onboard infrared camera.

Following the incident, the Scientific Coalition of UFOlogy filed a FOIA (Freedom of Information Act) request for radar data which revealed unknown targets (targets without transponders) in the area about 2-3 miles to the north and northwest of the Rafael Hernandez airport –the same direction the crew noted the object in the video approached from.

Analysis of the video revealed that the object was moving well in excess of 100 MPH and oddly, did not reduce speed when it impacted the ocean waters. Another anomaly captured in the video was an odd event that occurred about halfway through the recorded event – the object split into two parts shortly after entering the ocean and then briefly re-emerging. After the object split, the two halves continued to fly in a synchronized, controlled pattern.

Skeptics respond – and back off

The splitting of the object leads some skeptics to claim the object was a meteorite, however, it was pointed out that the object plainly flew for 3-4 minutes at low altitudes, sometimes as low as forty feet off the ground (in one instance, the object can clearly be seen disappearing behind a tree only to reappear, still flying at the same altitude, moments later). In fact, the video captured 2 minutes and 56 seconds of the UFO event including its arrival from the area over the ocean, its movement traversing across the land, and its reentry into the ocean’s waters – far longer than even a shallow-angled meteor takes to reach the earth’s surface (and at a much, much higher rate of speed).

The high-speed and maneuverability of the object and its ability to “split in two” rules out balloons or birds while its ability to enter the water without reducing its speed pretty much rules out everything else (known to man, anyway). Furthermore, researchers agree that the video shows no indication of pixel manipulation and thus, the possibility of a hoax is considered extremely unlikely.

Interestingly, it is rumored that the video was analyzed in Quantico, Virginia and that two other videos were made in the same area on different dates.

You can check out the video below.  I’ve edited the video, adding slo-mo and zooms after the original unedited segment.

Relevant sections from the official report

Below are relevant sections of the report regarding the incident.

Witness A and his crew took off on a routine aircraft patrol of the Puerto Rican coast on the night of April 25, 2013. The DHC-8 Turboprop aircraft took off from the runway heading east at 9:16 PM. The aircraft contained four crewmen including the primary witness, a copilot, and two instrument operators (one manning the on-board radar system and the other manning the thermal image mounted camera system). Witness A looked out his left window and saw a pinkish to reddish light over the ocean northwest of the airport. The light was moving towards the airport. He believed the light to be at a higher elevation than his aircraft, which was at 1600 to 2100 feet, based on the radar data and the thermal video system engaged a moment before. The pilot confirmed visual contact with the tower personnel. The tower personnel also confirmed visual contact. As the target approached shore, its light went out. The pilot then requested monitoring of the craft with the on-board surveillance equipment. According to the reporting witness the on-board radar did not pick the object up, but the thermal imaging camera did detect the object. (The CBP’s DHC-8 aircraft are equipped with SeaVue marine search radar primarily for detecting sea craft.) At this time, Witness A no longer had visual contact with the object but did see the object in his thermal imaging display in the cockpit along with the thermal imaging display in the rear of the aircraft under control of the instrument operator. He continued tracking the object while on routine patrol in the aircraft. The pilot made no attempt to intercept the unknown target nor did the target seem to react in any way to the tracking aircraft.

Witness B stated the close presence of this unknown object caused the delay of a commercial aircraft’s departure from the airport…. The statement’s claim was supported when it was found that Fed Ex Flight 58 was scheduled to depart the airport at 9:10 PM but did not actually depart until 9:26 PM.

Witness B indicated the video provided was the entire unedited video and that knowledge of this video was widespread within the CBP office located at an undisclosed location. According to Witness B, Air Force Intelligence was contacted and subsequently was provided a copy of the video. Air Force Intelligence offered no explanation to CBP and recommended other agencies to contact. The identity of those agencies is not known…

Witness A indicated another independent CBP pilot was east of the base and on his way back to the airport about 15 to 30 minutes before the primary witness’s sighting. This officer witnessed a formation of pinkish/red lights flying extremely low over the airfield in an unusual flight pattern. According to Witness A, the fellow pi9lot made a call to the base to notify personnel of his observations. Additionally, according to Witness A, the primary witness’s son witnessed a light similar to the observed unknown object exit and enter the ocean just off the coast north of the airport one to two evenings after the main event of April 25, 2013…

An anonymous email was sent to [one of the investigators] from an individual with the alias “John” and from a secure email address. The IP address within the email sent to the email server was received showing only the service provider server locations. The writer stated he or she had worked for the CBP and could vouch that the video was real. The writer’s subsequent statements supported their claims. The writer mentioned the specific model of the thermal imaging IR system used, an L-3 MX 15D and the writer named the CBP DCH-8 maritime patrol aircraft specifically, which the research for this report had already confirmed through Witness A… The information provided by this anonymous writer is considered credible and corroborates information from Witness A and B’s testimonies. Uniquely, the writer mentions the unknown object first appeared as a “forward flying horseshoe” shaped craft and gradually changed its configuration to a spherical shape before entering the water… Conversely to this report’s observations and conclusions, the writer makes a statement that the object did not split into two parts but rather the original object was met by a second craft and both proceeded to enter the water together.

Anonymous letter regarding the incident sent to Florida MUFON