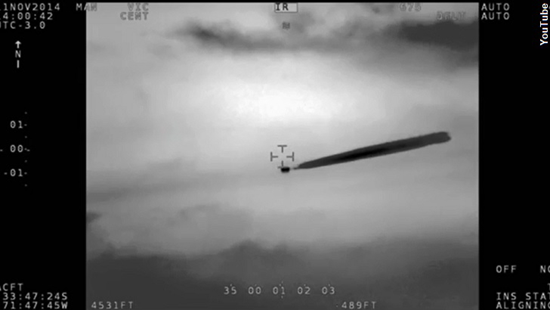 It’s being called the best UFO evidence to date – a 9-minute hi-def/infrared video shot in 2014 by the Chilean Navy. Remarkable for its clarity and duration, the video was declassified in late 2016 after officials admitted they were unable to identify the UAP (unidentified aerial phenomena) captured in the video.

The UAP was recorded on November 11, 2014, at 1:52 PM from a Navy helicopter during a routine daytime patrol mission. It was shot using a WESCAM MX-15 HD Forward Looking Camera which captures both hi-definition and infrared video (in which hot objects appear dark and cool object appear light).

The helicopter was flying about 4,500 feet at 152 MPH in clear weather. It was travelling north along the coast just west of Santiago. Piloting the craft were a Navy Captain, with many years flying experience, and a Navy technician.

The object was first spotted about forty miles away and moving at a speed of 150 MPH in a west/northwest direction. The captain described the UAP as flat and elongated with two lights that “did not coincide with the axel of motion”.

The Technician described the object as “white with a semi-oval shape”. Both men noted that given the object’s light color and high altitude, it would have been nearly impossible to see with the naked eye (indeed, it is sometimes difficult to discern even in the hi-def video – see below).

The pilots checked their radar, but it could not detect the object. They contacted a nearby airport who confirmed that no other aircraft had been authorized to fly into the controlled airspace through which the UAP was moving. The pilots attempted to lock onto the object using the camera’s built-in radar, but it also could not detect the object. They tried to communicate with the UAP using various radio bandwidth but received no response.

The pilots contacted two nearby radar stations. The stations noted that they could see the Navy helicopter on radar, but no other aircraft were flying in the area.

The pilots had been filming the video for about 8 minutes when suddenly it discharged a cloud of energy or gas. The discharge is seen in the IR video with “high thermal tracking” meaning, whatever it ejected was “hot”. The total video time runs 9 minutes 12 seconds. When the men last saw the object, it was disappearing into the clouds.

What we know the UAP was not

There’s an inherent problem with ultra-clear HD video. It gives us enough detail for our minds to easily fit the object to a known entity. Those who see the video for the first time will likely draw the conclusion that the object is an airplane, helicopter, bird, hot air balloon, or drone. However, military experts and high-level scientists easily ruled out all known objects. Director of Chile’s CEFAA told reporters, “We do not know what it was – but we do know what it was not.”

Chilean government officials and several prominent scientists studied the video for two years (over the course of at least eight meetings) but were unable to reach a consensus. The object was ultimately classified as “unknown”, and the video was released to the public.

The UAP was not a commercial aircraft

The first proposal, of course, was that the object was a commercial aircraft coming in for a landing at nearby Santiago airport. This theory proposed that the ejection seen in the video was a dump of cabin waste. This theory was rejected for several reasons. The object was not detectable by radar and given the object’s distance from the airport, would have easily been visible by air traffic control. Additionally, no aircraft were cleared for landing at the time (the airspace is restricted) and the object did not respond to radio communication attempts.

More importantly, commercial aircraft do not eject material without permission from the DGGAC –a long-standing widely-known Chilean regulation. Besides, aircraft waste falls quickly and does not disperse into a contrail as seen in the video. Secondly, the waste would be “cold”, not hot as seen in IR.

The UAP was not a balloon

Balloons are easily the most popular explanation for any UFO/UAP sighting. However, meteorologists confirmed that no weather balloons were in the area at the time of the sighting. They also pointed out that a balloon would not move in the direction the object was moving. In fact, it would have moved in the opposite direction – the wind was blowing from the west, towards the shoreline. A balloon would not emit a “hot” thermal ejection.

The UAP was not a drone

Experts confirmed that no drones were in the area at the time of the sighting. They further confirmed that no military exercises, including joint exercises with the United States, were in progress at the time. More importantly, as with any aircraft, a drone would have been detected by radar.

The UAP was not space debris

The possibility that the object was space junk re-entry was also considered. It was confirmed that no space debris entered the atmosphere on that date.

Air Force photo analysts determined that the object had “control of its movements” and was not affected by the winds. More importantly, the object would have fallen vertically and not travelled horizontally as seen in the video. Besides, any gases released at re-entry speeds would have burst into flames and not condensed into a contrail.

The UAP was not a military airplane

Remember, with IR, you’re not seeing the object but rather the heat associated with the object. In this case, the two objects could be heat released from twin aircraft engines. Jet exhaust tends to ball up when porting, giving the appearance of twin “globes” of heat.

The contrail adds further support – at the beginning of the video, you can briefly see that the material released exits from two different ports. The material then merges giving the appearance of a single stream of exhaust.

Given the evidence, the UAP could be some sort of radar-avoiding twin-engine aircraft. In fact, the Chilean military may have known what the object was and thus released the video to the public not to confound or confuse but as the means to “announce” to a foreign power, “We know what you did.”

However, there are problems with this assumption. Given the discernable speed of the object, it would have been much further away than the pilots reported, and experts confirmed the distance at 55 KM, almost exactly what the pilots had estimated. Furthermore, it’s difficult to imagine that experienced pilots would be unable to estimate distance from the air.

Secondly, radar-avoiding aircraft are specifically designed to *not* emit heat signatures, particularly potential identifiers such as thermal emission from the engines. In fact, with regards to stealth aircraft, the visible IR signature is of the plane body itself, not the stream of hot air behind it.

Who were the experts who examined the video?

Regarding the “experts” who studied the video, in addition to CEFAA (see below), Huffington Post reported the following:

“Written reports or video analyses were provided by the well-known astrophysicist Luis Barrera; an image expert from the Air Force photogrammetric service; photo and video analyst Francois Louange and colleagues from France, arranged through the French agency GEIPAN; Luis Salazar, Chilean Air Force meteorologist; a DGAC aeronautic engineer; a digital images specialist from the National Museum of Aeronautics and Space in Santiago; and Mario Avila, a nuclear chemist.”

CEFAA is a Chilean government organization which is tasked with investigation of UAPS. It operates under the direction and control of the Chilean Air Force. Regarding the video, CEFAA Director said:

“This has been one of the most important cases in my career as director of CEFAA because our Committee was at its best. “The CEFAA is well regarded partly because there is full participation from the scientists of the academic world, the armed forces through their representatives, and the aeronautic personnel from the DGAC, including its Director. I am extremely pleased as well with the conclusion reached which is logical and unpretentious.” The official conclusion was that “the great majority of committee members agreed to call the subject in question a UAP (Unidentified Aerial Phenomenon) due to the number of highly researched reasons that it was unanimously agreed could not explain it.”

Below is the full video with additional post-processing zooms added. Let us know what you think in the comments below.