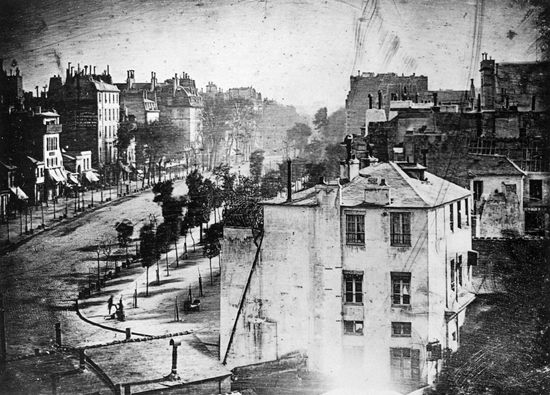 The black and white photograph depicting an early 19th century scene was taken by Louis Daguerre in 1838 on the streets of Paris, France. With a seven minute exposure time, two stationary humans were captured on camera, making it the oldest known photograph containing actual images of people. Oddly, there were likely many other people (and horses, carriages, etc.) in the photograph but they were moving too quickly to register on the plate.

Toward the bottom of the photo, you can make out a single man, standing still as his shoes are being shined. The shoeshine boy was relatively still as well and also appears in the photograph. The street seen in the photograph is the Boulevard du Temple in Paris, France. With its shops, theaters, cafes, and restaurants, the Boulevard du Temple would have been bustling with activity at the time the picture was taken.

Some believe other human beings may have been captured in the photograph. The photo montage below shows other possible persons appearing in the photo.  Click on the photo for a description of the scene.