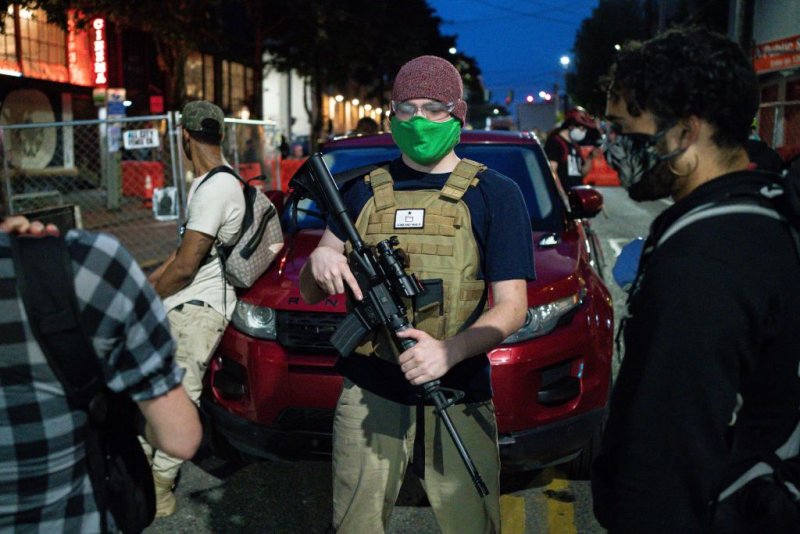 Fox News demonstrates a unique propensity for creating “fake news”. We’re not talking bias here, but rather a clear ethical violation in their portrayals of the recent protests against police brutality and racism. This week they went all-in with at least three instances of digitally altered or misleading photos.

The photo above shows a volunteer security worker at the Capitol Hill Autonomous Zone. It was taken on June 10, 2020 in Seattle, Washington. The photo below is a digitally altered photo Fox News ran on Saturday in a story about Seattle’s Capitol Hill Autonomous Zone (CHAZ). Photojournalism experts. The same armed man is clearly Photoshopped into the picture of a shattered storefront.

Photojournalism experts surveyed by Time Magazine and the New York Times are saying it’s a clear violation of ethical standards for news organizations.

This wasn’t the first time Fox News digitally altered a Seattle image to portray the protests in a negative light. In fact, it’s not even the first time they used the security gunman in their ruse. The original photo below was taken June 10 and shows a sign on a barrier at the entrance of the Capitol Hill Autonomous Zone.

And here’s a photo Fox News that ran on June 12 on a homepage article about the Seattle protests. Yes, that’s the same gunman digitally inserted into the image to make it appear he is guarding the entrance to the autonomous zone.

Commonly accepted standards of journalism require photo illustrations to be clearly marked, and caution against using photos from different times and locations unless they are clearly marked. Fox included no disclaimers alongside the photos and no indication that the photos had been manipulated. But when the Seattle Times contacted them about the altered images, they were immediately taken off the Fox News website.

Lest you think this is an abnormal occurrence at Fox, let me point out this photo that appeared in a Fox news homepage story, titled Crazy Town, about the Seattle protests and armed guards patrolling the area and shaking down businesses. The photo is dramatic indeed. Except it’s not Seattle. This photo was taken on May 30, 2020 at the St. Paul, Minnesota protests.

Even the bylines under the photograph are deceptive. For instance, the “shaking down” of businesses came from a statement made by Seattle Police Chief Carmen Best who quickly walked back the statement, admitting the information derived from “rumor and social media”. Those at the Seattle protests recognize Fox’s silliness (the protests have been mostly peaceful, tranquil even) but Fox Readers bombarded articles with comments criticizing the “violence” committed by Seattle protesters.

“Breaking news … anarchists in state of confusion … and in other news, the sky is blue …”

“Send everyone of them to a labor camp. Show them how socialism works. We have a ton of infrastructure projects that need done.”

And one comment from a reader that actually gets it.

“Well, it’s not like they’re digitally altering pictures for the media or anything…..”