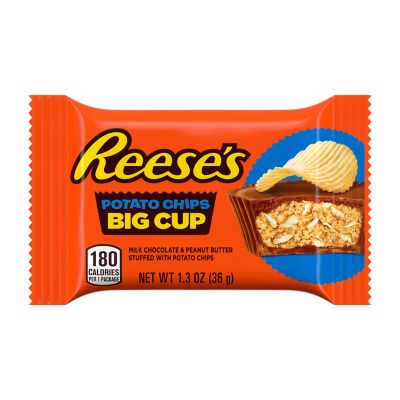 “We’re on a mission to show the world that EVERYTHING tastes better with chocolate and peanut butter. This time, we mixed crispy rippled potato chips right in with our smooth peanut butter, then coated it in rich milk chocolate. In each bite of a REESE’S Big Cup with Potato Chips Peanut Butter Cup, you’ll taste the chocolate, then the peanut butter, then a curious crunch for the ultimate sweet and salty snack moment. We do this for you – so you don’t have to decide what kind of snack to have. Our treats have it all!”

Oddly (or maybe not, given your preferences), reviews for the potato chip-stuffed Reese’s have been positive with an average rating of 4.6 out of five, based on 32 reviews.

“There’s potato chips throughout the cup so you’re getting that salty flavor in every bite. The chip with the peanut butter and chocolate is a match made in heaven.”

“Great way to do sweet and salty. I originally thought it was just a big cup but when I hit the potato chip I thought it was salted toffee. Soooo Good!!!”

However, not everyone is a fan of the new Reese’s Potato Chips Big Cup.

“Sorry, but the potato chip bits I crunched in each bite reminded me I was crunching ground up glass.”