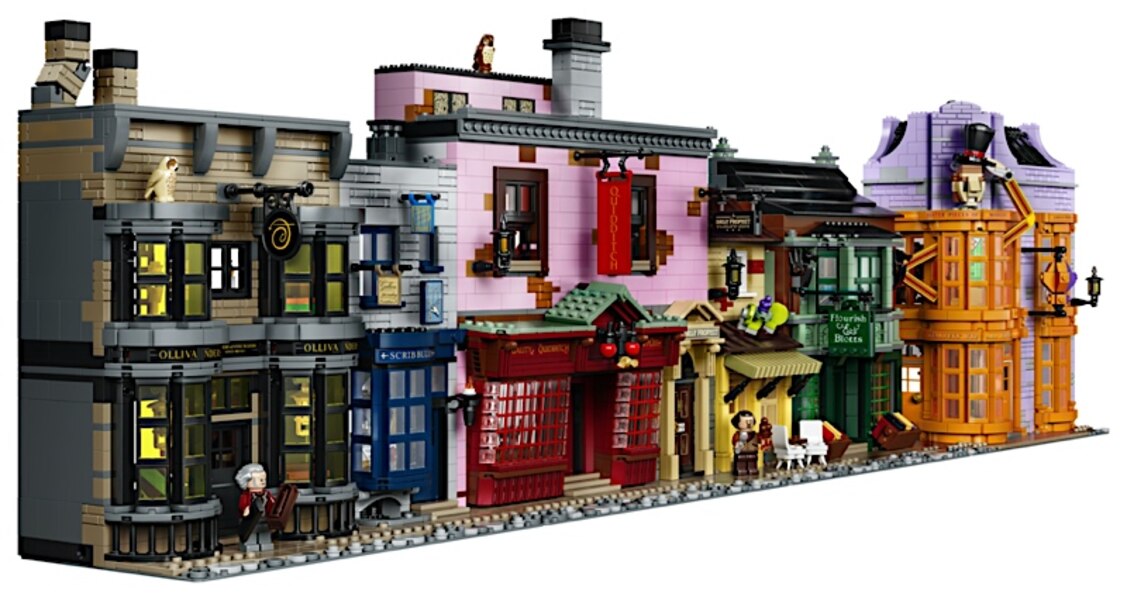 LEGO is releasing a massive large scale set (5,544 pieces for ages 16 and up) that will let Harry Potter lovers explore the magical realm of Diagon Alley! The set is an expanded edition of LEGO’s 2011 set that contained only 2,025 pieces and 11 minifigures but sold for roughly the same price. The 2011 set ceased production in 2017. Set 75978 is delightfully unexpected news from LEGO.

No need to pass through the Leaky Cauldron. Now even Muggles can shop in Diagon Alley by building this fantastically magical set that includes extensively detailed buildings and 14 minifigures! Measuring more than a meter wide, the impressive model captures the scale and ambiance of the bustling magic-supplies hub. Behind magnificent facades lie intriguing interiors, fascinating features, and familiar characters. Check out the wands at Ollivanders™; drop in on Gilderoy Lockhart™’s book-signing event at Flourish & Blotts™ bookseller; obtain a love potion from Weasleys’ Wizard Wheezes™; and peruse the products and paraphernalia at Scribbulus™ Writing Implements, Quality Quidditch™ Supplies, Florean Fortescue’s Ice Cream Parlor and the Daily Prophet™.

As to be expected from LEGO, the set is outlandishly expensive at $399.99 but until a worthy LEGO competitor emerges in the market (e.g. Kre-O, Mega Contrux) not much we can do about that.

Check out photos of the LEGO Diagon Alley set in the gallery below.