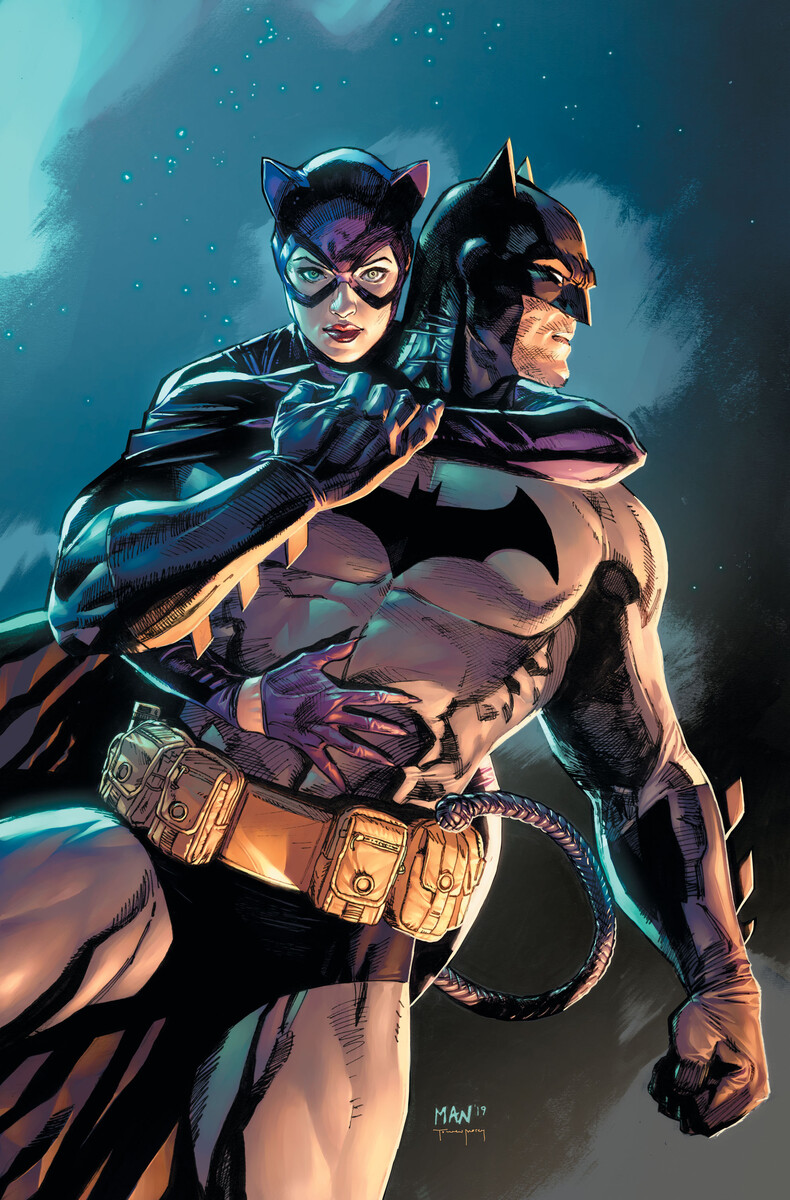 Bruce Wayne and Selina Kyle have rekindled their long-running, on-again, off-again relationship in a new series from DC Comics. Believing all obstacles are removed from their path, they once again begin operating as a crime-fighting duo in their secret lives. In Batman/Catwoman, a crime story told across three separate timelines, writer Tom King, and artists Clay Mann and Tomeu Morey return to the romantic saga of Batman and Catwoman, continuing the story they began in the pages of Batman!

The three timelines include the past, when The Bat and The Cat first fell in love. Did they meet on the street? Or was it on a boat? Rooftops, ramparts and gargoyles, and over 80 years of fans that have read their comics, are their only witnesses.

Then there’s the distant future timeline, where after a long and happy marriage Bruce Wayne has passed away. Selina Kyle decides to settle an old score without having to worry about the Batman objecting. Catwoman is serving a very cold dish to her enemies: Revenge.

And finally, in the present, Bruce and Selina’s union is threatened by the arrival of one of Batman’s past flings, Andrea Beaumont, a.k.a. Phantasm. Beaumont’s return calls into question how each character chooses to operate in their costumed, and personal, lives, and any move by Phantasm could change the fate of Bruce and Selina’s future.

The only other person besides Bruce and Selina to have been along for the whole ride has been the Joker, and what he did in the past is going to have direct consequences on today and tomorrow. Batman’s greatest foe will intervene any time Batman and Catwoman try to take steps towards peace. Any change in the Caped Crusader’s life will be matched with the chaos of the Clown Prince of Crime. …and the Joker’s not leaving any witnesses. Not even a gargoyle. Will Selina make good on her final kill?

Batman/Catwoman, by Tom King, Clay Mann, Tomeu Morey and Clayton Cowles, edited by Jamie S. Rich and Brittany Holzherr, will launch a 12-issue run on December 1, 2020, with a cover by Mann and Morey and a variant cover by Travis Charest plus a variant cover by Jim Lee, Scott Williams and Alex Sinclair. New issues will ship monthly with a skip month planned for a Batman/Catwoman Special in June 2021, and the series will carry DC’s Black Label content descriptor, indicating content appropriate for readers ages 17+.