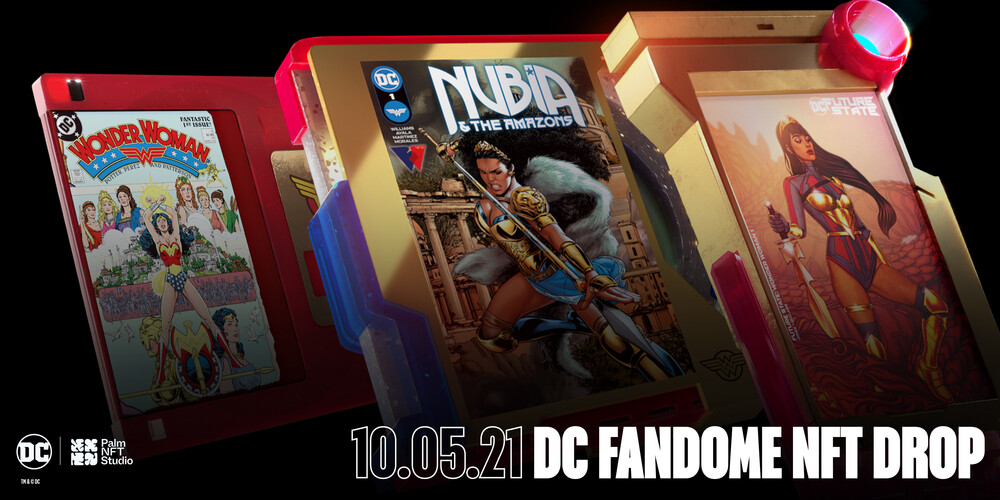 DC, in partnership with Palm NFT Studio, officially steps into the world of blockchain technology with its first collection of NFTs on October 5. Using Palm’s technology, the NFTs will highlight the company’s legendary history, breadth of characters and diversity of storytelling. Hand-selected by DC’s Publisher and Chief Creative Officer Jim Lee as a thank you to its legion of loyal fans and an invitation to attend DC FanDome on October 16, registrants will be able to collect a free NFT by enrolling for this year’s global virtual event with the ability to unlock a second, free NFT by sharing on social media.

Featuring Super Heroes like Batman, Superman, Green Lantern, Wonder Woman, and Harley Quinn, the premier drop offers fans the opportunity to collect three covers for each character in three levels of rarity. For example, fans of the Princess of Themyscira a.k.a. Wonder Woman can collect a Common (1987’s Wonder Woman #1 by George Peréz), Rare (2021’s Nubia and the Amazons #1 by Alitha Martinez), and/or Legendary (Yara Flor on 2021’s Future State: Wonder Woman #1 by Jenny Frison) cover.

“We spent a lot of time on how to translate and adapt these classic covers into a 21st century format such as NFTs. This drop pays homage to our 87 year history while visualizing a future in which NFTs play a foundational role in novel ways of interacting with DC content and unlocking new experiences.”

In 2020, DC FanDome: Hall of Heroes generated a massive 22 million global views across 220 countries and territories in a mere 24 hours. Given that this year’s attendance is anticipated to surpass 2020’s staggering numbers, this will be the first large-scale virtual event with registration powered by NFTs, and very likely one of the largest NFT drops ever.

To register for DC FanDome and receive your free NFT, visit DCFanDome.com.

For more on DC and Palm’s NFT collaboration, visit DCComics.com.