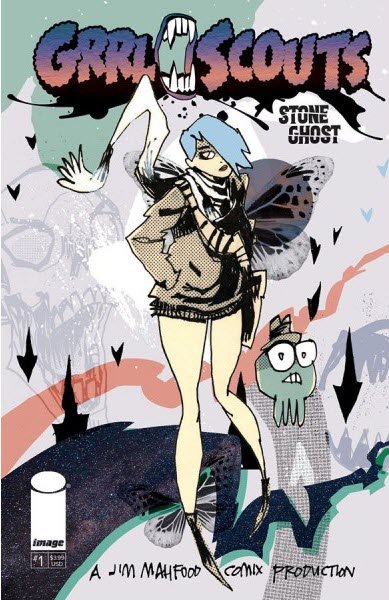 Jim Mahfood returns to his self-published Grrl Scouts universe for an all new chapter in, Stone Ghost. This six issue miniseries will launch from Image Comics in November. Packed from cover-to-cover with completely unique and eye-popping Mahfood art—including bonus comics and behind-the-scenes fun—readers will feel the Funk with this new addition to the Grrl Scouts story.

“I’m extremely excited about this new Grrl Scouts series and I think fans and new readers alike will be very entertained and definitely get a lot of bang for their buck with this one. I’m introducing an entire new cast of characters, expanding on the mythology of the Grrl Scouts, and handling every aspect of the production of the book: writing, drawing, coloring, and lettering, to make this a very unique experience! This series is for fans and collectors alike who are looking for something different and off-beat when they’re staring at that wall of new releases in the comic shop.”

Grrl Scouts: Stone Ghost #1 will be available at comic book shops on Wednesday, November 24 and will also be available for purchase across many digital platforms, including Amazon Kindle, Apple Books, comiXology, and Google Play.

Jim Mahfood released the self-published GIRL SCOUTS #1 in 1995. Although only released in the Midwest USA, it quickly sold-out. Mahfood followed this up with GIRL SCOUTS #2. Another success, but the Girl Scouts of America didn’t think this was funny at all and sent Mahfood a cease and desist letter. The spelling of the name was changed to GRRL SCOUTS and the adventures continued on.

Check out pics in the gallery below.