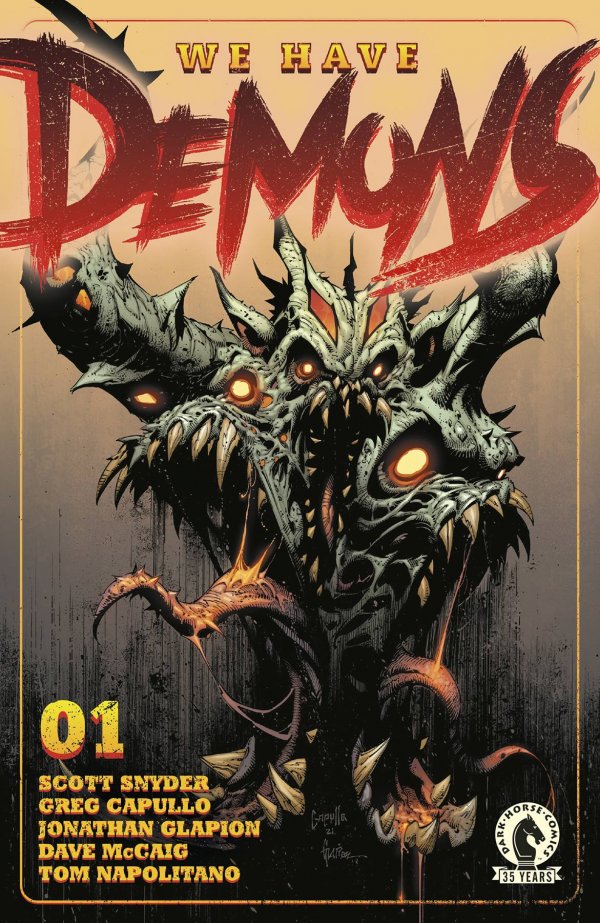 A new story arc begins in James Tynion IV and Werther Dell’Edera’s Something Is Killing the Children #21 from BOOM! Studios, the best-selling comic book of March 2022 through Diamond Comic Distributors, the world’s largest distributor of comics, graphic novels, and pop culture merchandise. In addition to the standard edition of BOOM!’s Something Is Killing the Children #21, the die-cut mask variant edition of issue #21 also charted in the top ten for the publisher at #5 for the month.

Among the premier publishers, Scott Snyder and Greg Capullo’s supernatural series We Have Demons #1 from Dark Horse Comics was their top book for March at #13, and Dynamite Entertainment’s Draculina #2 by Christopher Priest and Michael Sta. Maria ranked #44 for the month.

The Hero Initiative’s JLA/Avengers, a special reprint of the Marvel and DC crossover by Kurt Busiek and George Pérez to raise money for the charity in honor of Pérez, was March’s best-selling graphic novel through Diamond.

Image Comics had four books in the top ten: Skottie Young and Jorge Corona’s The Me You Love in the Dark Volume 1 (#3), Kurt Busiek and Brent Anderson’s Astro City MetroBook Volume 1 (#4), A Righteous Thirst for Vengeance Volume 1 (#6), and Radiant Black Volume 2 (#7).

Also in the top ten were products from Beast Kingdom and NECA.

The Pokémon Trading Card Game: Sword & Shield—Fusion Strike Booster Packs from Pokémon USA were the best-selling game product of March through Diamond, and the Sword & Shield—Chilling Reign ranked #2. Other vendors in the top ten include Konami Digital Entertainment, NECA/WizKids, and Paizo Publishing.

How does Diamond calculate the charts? It all starts at the comic book shop.

Data for Diamond’s sales charts are compiled by Diamond Comic Distributors from sales made to thousands of comic book specialty shops located in North America and around the world.  Additional sales made to online merchants and other specialty retailers may be included as well.

Ranking is calculated based upon orders for comic books, graphic novels, toys and games invoiced and shipped to Diamond customers during any given month, which comprises pre-orders, advance reorders, and reorders, minus any products that are received back from a title marked as returnable. Please note that products marked with an asterisk (*) have had their reported quantities reduced due to retailer returnability, and thus may rank lower on the charts than their actual sales would reflect.