Production for the new movie, RoboCop, a remake of the 1987 science fiction hit, began on September 15, 2012 in Toronto.  Produced by MGM and Columbia Pictures, Robocop will star Joel Kinnaman, Gary Oldman, Michael Keaton, Aimee Garcia (the Nanny on Dexter), and Samuel L. Jackson.  Robocop is set to be released on August 9, 2013.  Director Jose Padilha expressed his excitement:

It’s exciting to think that we’re going to be starting production on ‘RoboCop.’ I have a dream cast and an incredibly creative production team, and we are all supremely dedicated, working together to make a movie that will not only live alongside the first film but also break new ground, be relevant for modern audiences, and stand on its own. 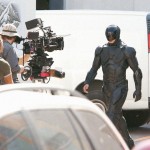 RoboCop is set in the year 2028 in Detroit Michigan, a city plagued with crime and corruption.  With American robots winning wars across the globe, Detroit officials decide to introduce a new robotic model to aid law enforcement personnel.  When veteran officer Alex Murphy is killed on patrol, officials recognize a unique opportunity to use parts of Alex Murphy’s body to construct a RoboCop.  Unknown to its human creators, RoboCop somehow retained fragments of memory from Murphy’s human life, providing him a unique perspective of his law enforcement duties.

Here are shots from filming: