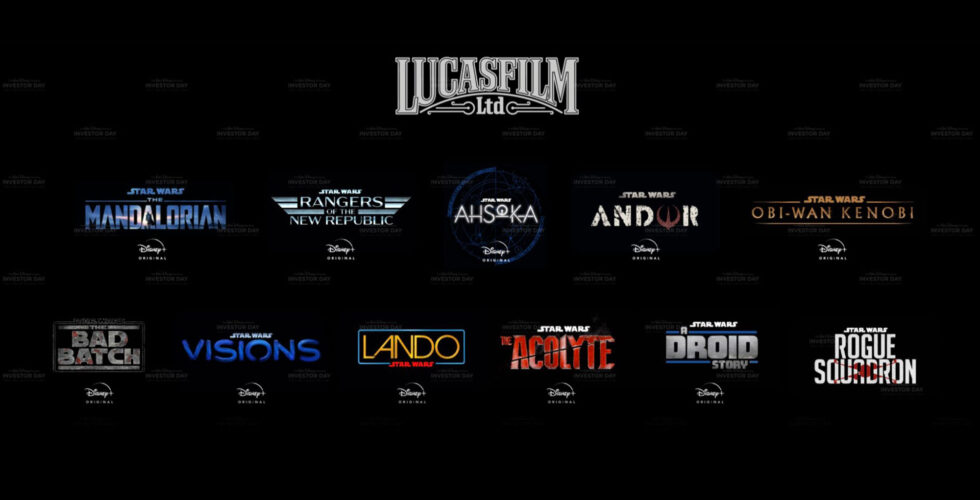 Disney stunned everyone with yesterday’s announcements at their Disney Plus event. 2021 is going to be a marathon for the company and a boon for geeks. Here’s everything announced at the Disney+ event.

Fans will get an in-depth look at MCU characters. The first two episodes will center around Wanda Maximoff and Vision and will air one week before WandaVision premieres on Disney+. Each show will revisit superheroes, villains, and key moments from the MCU in preparation for the stories that are to come on Disney+.

WandaVision will kick off Phase 4 of the MCU. WandaVision will directly set up 2022’s Doctor Strange and the Multiverse of Madness. Elizabeth Olsen (Scarlet Witch) is set to star alongside Benedict Cumberbatch’s Stephen Strange. It will premiere on Disney+ on January 15, 2021.

Anthony Mackie returns as Sam Wilson aka The Falcon, and Sebastian Stan as Bucky Barnes aka The Winter Soldier. Sam and Bucky, who came together in the final moments of Avengers: Endgame, team up in a global adventure that tests their abilities—and their patience. Directed by Kari Skogland with Malcolm Spellman serving as head writer, Marvel Studios’ The Falcon and The Winter Soldier debuts on Disney+ on March 19, 2021 as a six-episode series.

In Marvel Studios’ action-packed spy thriller “Black Widow,” Natasha Romanoff aka Black Widow confronts the darker parts of her ledger when a dangerous conspiracy with ties to her past arises. Pursued by a force that will stop at nothing to bring her down, Natasha must deal with her history as a spy and the broken relationships left in her wake long before she became an Avenger.

Tom Hiddleston is returning as the lead character, but we can see this is an entirely different trickster, appearing to be the 2012 alt-version of Loki we glimpsed muzzled in Endgame. The series also stars Owen Wilson, Gugu Mbatha-Raw, Sophia Di Martino, Wunmi Mosaku and Richard E. Grant and takes place after the events of Avengers: Endgame.

imu Liu stars as Shang-Chi in Marvel Studios’ Shang-Chi and The Legend of The Ten Rings. Shang-Chi must confront the past he thought he left behind when he is drawn into the web of the mysterious Ten Rings organization. The film’s cast also includes Tony Leung as Wenwu, Awkwafina as Shang-Chi’s friend Katy, and Michelle Yeoh as Jiang Nan. Additionally, Fala Chen, Meng’er Zhang, Florian Munteanu and Ronny Chieng appear in the upcoming movie, which is directed by Destin Daniel Cretton.

What If…? flips the script on the Marvel Cinematic Universe and reimagines famous events from the films in unexpected ways, such as “What if Peggy Carter was the one who became a super soldier?” Directed by Bryan Andrews, with Ashley Bradley serving as head writer, Marvel Studios’ What If…? will premiere on Disney+ in Summer 2021.

At the Walt Disney Company’s Investor Day presentation, Kevin Feige, president, Marvel Studios, and chief creative officer, Marvel, revealed the studio will bring one of Marvel’s most iconic families to the big screen with the release of Marvel Studios’ Fantastic Four! Spider-Man veteran Jon Watts is on board to direct.

Hailee Steinfeld will play Kate Bishop and will be based off the Matt Fraction comic book run. The cast will be Vera Farmiga as Kate Bishop’s mom, Fra Fee as Kazi (aka Clown, which was rumored), Alaqua Cox as Maya Lopez (aka deaf hero Echo). The other two rumored but not announced were Tony Dalton as Swordsman and Zahn McClarnon as Echo’s father. Set for release in late 2021 or early 2022.

Taitiana Maslany will play the 6’7″ lawyer in this brand new comedy series coming to Diney+. Tim Roth and Mark Ruffalo will also be a part of the series. Additionally, the show will welcome a bevy of different Marvel characters to the series, including the Hulk, once again played by Mark Ruffalo, along with the Abomination, with Tim Roth returning to the role. She-Hulk is directed by Kat Coiro and Anu Valia, with Jessica Gao serving as head writer.

Samuel L. Jackson will star as Nick Fury in this new Disney+ series and will bring him back together with Ben Mendelsohn’s Talos. Plot will be around shapeshifting Skrulls who have been infiltrating Earth for years.

Dominique Thorne will play the young genius inventor Riri Williams in the new series, which Feige confirmed will crossover with the larger MCU films.

The Guardians of the Galaxy Holiday Special

Before Star-Lord, Gamora, Drax, Rocket, and Groot hit the big screen with the next Guardians of the Galaxy film in 2023, watch the Guardians engage in some spirited shenanigans in an all-new original special, created for Disney+, during the 2022 holiday season. This James Bunn one-off arrives winter 2022.

Ant-Man and the Wasp: Quantumania

Peyton Reed is director again and Paul Rudd and Evangeline Lilly return as the title characters, along with Michael Douglas and Michelle Pfeiffer reprising their previous roles. Additionally, Jonathan Majors (Lovecraft Country) will play Kang the Conqueror and Cassie Lang has been recast and will be played by Kathryn Newton.

Will begin filming in 2021 and will include Christian Bale as Gorr the God Butcher with Chris Hemsworth (Thor), Natalie Portman (Jane Foster), and Tessa Thompson (Valkyrie) returning to their roles,

Doctor Strange in the Multiverse of Madness

Will begin filming next year and will see the return of Benedict Cumberbatch, Benedict Wong, Rachel McAdams, Chiwetel Ejiofor, while adding Olsen’s Scarlet Witch and Xochitl Gomez (The Baby-sitter’s Club) as America Chavez (aka Miss America). The Marvel Studios adventure, set to debut in theaters March 25, 2022, will connect the events of next month’s WandaVision, the original new series debuting on Disney+, and the upcoming Spider-Man film.

Will be helmed by MCU Spider-Man director Jon Watts.

Disney announced that they will not recast Black Panther after the death of Chadwick Boseman. Instead, the sequel will continue to explore the incomparable world of Wakanda and all of the rich and varied characters introduced in the first film. Written and directed by Ryan Coogler, who was behind Black Panther, the film will be released on July 8, 2022.

This original series for Disney+ centers on the character Marc Spector aka Moon Knight, a complex vigilante who suffers from dissociative identity disorder. These multiple identities who live inside him are distinct characters in the series and will appear against a backdrop of Egyptian iconography. The action-adventure Marvel Studios’ Moon Knight series, created for Disney+, is directed by Mohamed Diab.

A new spinoff from The Mandalorian, titled “Rangers of the New Republic” is in development. It’s currently unknown who, or what, the series will be focusing on, but with Gina Carano’s Cara Dune being rumored to earn her own spinoff series, it sounds like this could be that project.

Ahsoka, a new Original Series, starring Rosario Dawson and set within the timeline of The Mandalorian. It will debut on Disney+ around Christmas 2021.

Andor, a Rogue One prequel starring Diego Luna in the role of Cassian Andor from Rogue One: A Star Wars story is headed to Disney+ in 2022.

Hayden Christensen returns as Anakin Skywalker/Darth Vader, joining Ewan McGregor in OBI-WAN KENOBI. The Original Series begins 10 years after the dramatic events of Revenge of the Sith, and will debut on Disney+.

This series spins out of the final season of Star Wars: The Clone Wars. The series will debut in 2021. According to a press release, “The series follows the elite and experimental clones of the Bad Batch (first introduced in The Clone Wars) as they find their way in a rapidly changing galaxy in the immediate aftermath of the Clone War. Members of Bad Batch – a unique squad of clones who vary genetically from their brothers in the Clone Army — each possess a singular exceptional skill which makes them extraordinarily effective soldiers and a formidable crew. In the post-Clone War era, they will take on daring mercenary missions as they struggle to stay afloat and find new purpose.”

Star Wars: Visions, an Original Series of animated short films, celebrates the Star Wars galaxy through the lens of the world’s best Japanese anime creators. There will be 10 “fantastic visions” in all. The show will air in 2021 on Disney+.

Dear White People director Justin Simien has been tapped to develop the story which is in early development now. It will debut on Disney+ in 2022. Takes place five years before the events of Rogue One and will explore Cassian’s role in the growing Rebel Alliance.

The Acolyte will be set in the final days of the High Republic era, a timeline that is set to be explored in Star Wars’ publishing initiative early next year. “It will be a female-centric series that takes place in a different part of the Star Wars timeline than other projects.”

A brand new movie called Star Wars: Rogue Squadron is set to hit theaters in December 2023. It’s believe the movie will focus on X-Wing pilots as they battle in space over the fate of the galaxy.

Raya and the Last Dragon will be released both in theaters on Disney+ Premiere Access on March 5, 2021, a strategy similar to what Disney implemented for Mulan earlier this year.

Willow, an Original Series from Lucasfilm starring Warwick Davis, with pilot directed by Jon Chu, is coming in 2022 to Disney Plus.

A new Indiana Jones movie will arrive in July 2022 and will feature the return of Harrison Ford.

Children of the Blood & Bone

Based off Tomi Adeyemi’s bestselling novel, Children of the Blood & Bone will be developed by Lucasfilm and 20th Century Studios and will follow a young African girl’s quest to restore magic to her forsaken people, the Maji.

A Toy Story prequel and origin story for Buzz Lightyear. Directed by Finding Dory co-director Angus MacLane, Lightyear will star Chris Evans as the voice of Buzz and is scheduled to hit cinemas in summer 2022.