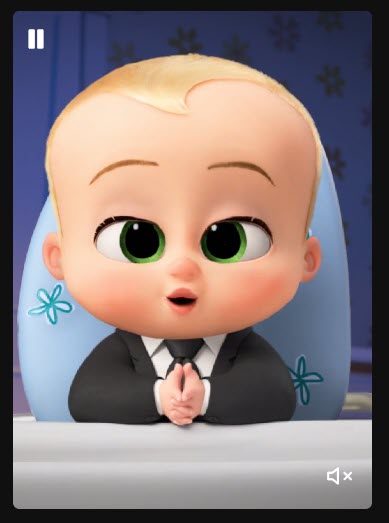 The Boss Baby, is available for personalized video bookings, becoming the first-ever animated character to join Cameo, a popular app that connects fans with pop-culture personalities. The Boss Baby will now be exclusively poised to deliver hilarious custom, one-to-one video messages, ranging from birthday greetings and congratulatory wishes, to pep talks and of course, roasts.

“This creative collaboration between Universal, DreamWorks Animation, Cameo and Hour One uniquely bridges together innovation, technology and DreamWorks’ prized franchise character, The Boss Baby, to deliver a standout, first-of-its-kind interactive fan opportunity. Delivering this enhanced, next-level opportunity to Cameo users paves the way for film and television audiences to uniquely connect with a DreamWorks property and effectively underscores Universal’s commitment in this rapidly-changing landscape to further evolve into a more wholistic content and IP studio.”

The Boss Baby’s video greetings are made possible through a combination of DreamWorks Animation’s unparalleled custom-animation team and technology from Hour One, an end-to-end cloud-native video creation platform powered by AI. Hour One’s ability to reproduce and animate highly realistic characters with natural facial expressions, gestures and perfectly synched speech, made Hour One the ideal technology to bring The Boss Baby to Cameo.

The Boss Baby is now available to book on Cameo. To order a personalized video from The Boss Baby, visit https://www.cameo.com/bossbaby.