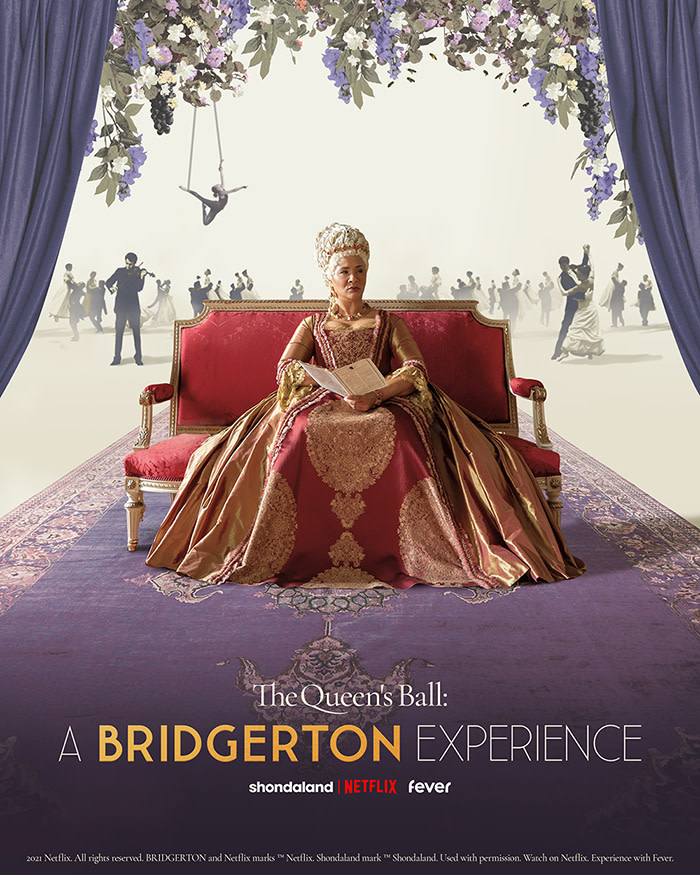 This winter, Her Majesty is delighted to invite you to The Queen’s Ball: A Bridgerton Experience coming to select cities across the globe in 2022. These events will undoubtedly be the talk of The Ton and mark the beginning of the much anticipated social season.

Guests will be transported to England’s Regency-era London for a live concert by a string quartet playing Bridgerton’s memorable soundtrack. Alongside the music, attendees will be acquainted with familiar characters to relive and participate in much-loved moments from Netflix and Shondaland’s hit series.

Attendees will be guided through the evening by the voice of the enigmatic Lady Whistledown and presented with opportunities to prove they are deserving of Her Majesty, the Queen’s attention. The experience features immersive rooms, including a visit to Madame Delacroix’s modiste to get fitted for the occasion, a stop at an underground Regency-era Painting Studio to strike their most regal pose, and a highly-anticipated visit with the Queen to try and win Her Majesty’s favor. Throughout the evening, dancers will perform alongside a string quartet playing music inspired by the series, including the classical covers of contemporary songs.

Co-produced by Netflix, Shondaland, and Fever, The Queen’s Ball: A Bridgerton Experience is an immersive show that will transport fans of the hit series and global sensation to England’s Regency-era London. There will be a live concert by a string quartet playing music inspired by Bridgerton’s iconic soundtrack and guests will relive the main character’s love story through a dance show and immersive character interactions. Attendees can also try to win the Queen’s favor to be named the season’s Diamond.

Touring will take place in dozens of cities around the globe. Los Angeles, Chicago, Montreal, and Washington, D.C. will be the first to launch the experience starting early 2022. Netflix’s Greg Lombardo said:

“Shondaland effortlessly transported Bridgerton viewers into a reimagined Regency-era London, capturing hearts around the globe as fans connected with every aspect of the series from its delightful characters and the superb actors who brought them to life, to the costume design and art and set direction to the soundtrack. We’ve partnered with Fever on The Queen’s Ball: A Bridgerton Experience to create a similarly unique fan experience designed to immerse attendees in the lavish world of Bridgerton and bring this world to them wherever they are.”

Tickets go on sale Thursday, September 16, and start at US $49/CAD $45 per ticket. Quantities will be limited. Fans are encouraged to sign up to the waitlist to receive early information on ticket availability by city and can follow http://bridgertonexperience.com or @bridgertonexperience on Facebook and Instagram for more.

Based on Julia Quinn’s best-selling series of novels, Bridgerton is set in the sexy, lavish, and competitive world of Regency London high society. From the glittering ballrooms of Mayfair to the aristocratic palaces of Park Lane and beyond, the series unveils a seductive, sumptuous world replete with intricate rules and dramatic power struggles, where no one is truly ever on steady ground. At the heart of the show is the powerful Bridgerton family. Comprised of eight close-knit siblings, this funny, witty, daring, and clever group must navigate the upper ten thousand’s marriage mart in search of romance, adventure, and love. Season two is scheduled to premiere in 2022. Please visit the Netflix media center for additional information on the series.