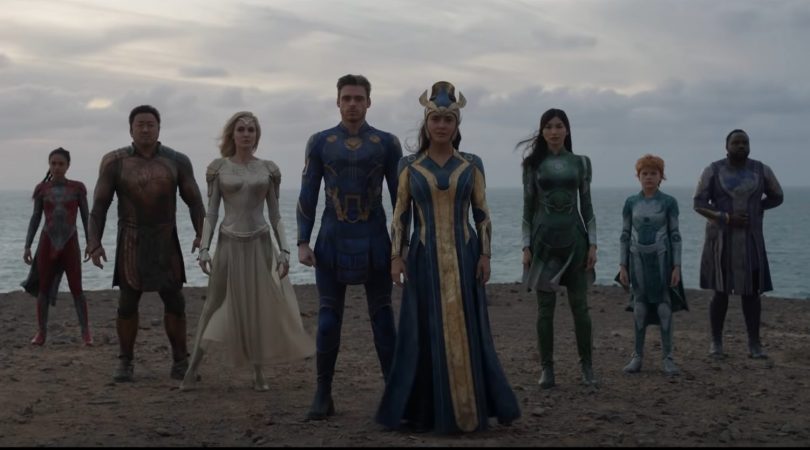 Today Marvel released the first teaser trailer and official poster for Eternals, set to hit theaters on November 5, 2021. The movie is directed by Oscar and Golden Globe-winning filmmaker Chloe Zhao and features an all-star cast including Salma Hayek, Angelina Jolie, Gemma Chan, Kit Harrington, and Richard Madden. To say Marvel has thrown their weight behind the Eternals film would be an understatement. All indications hint that Marvel will use Eternals to a large degree in the future.

Eternals is based on Jack Kirby’s Marvel comic of the same name and tells the epic story of a new God-like team of alien superheroes who were created by an alien civilization (Celestials) to act as defenders of Earth. They have secretly lived on Earth for thousands of years. The storyline spans thousands of years and pits the team against another group of immortals, mankind’s oldest enemy, the Deviants. The movie version of Eternals will follow the events of Avengers: Endgame.

Ikaris is the tactical leader of the Eternals. He can manipulate gravitons in order to fly, has superhuman strength, and can project energy beams from his eyes. Yes, sounds a lot like Superman except he also has telepathic powers which let him create illusions that alter his appearance, can release energy from his hands, and teleport..

Sersi, a museum curator on Earth (who eventually becomes a New York socialite), has a special fondness for mankind and uses her ability to manipulate matter to protect us. Her love for Ikaris is explored throughout the Eternals storyline.

Kingo can project cosmic energy from his hands. His desire for fame led him to lead an Earth-life as a Bollywood film star.

Makkari is akin to The Flash and uses her super-speed to scout other planets. She if the first deaf MCU character to appear in film.

Phastos is a highly-intelligent cosmic-powered inventor who uses his powers to secretly advance humanity through technology. He is the first gay MCU character to appear on film.

Ajak is the spiritual leader of the Eternals. A brilliant archaeologist, he can communicate with the Celestials and possesses the ability to regenerate after any injury.

Sprite can project lifelike illusions but mentally, is a child (and treated as such by the other Eternals). Sprite can also fly and teleport over great distances.

Gilgamesh is the most powerful Eternal and can project an exoskeleton of cosmic energy.

Druig is portrayed as an aloof Eternal that disagrees with the group’s interaction with humanity. He can use cosmic energy to control the minds of others.

Thena is a fierce female warrior (she is often mistaken for the goddess Athena) who can use cosmic energy to create any weapon of her choice. Think Wonder Woman to the nth degree.

Dane is a warrior who wields a mystical sword.