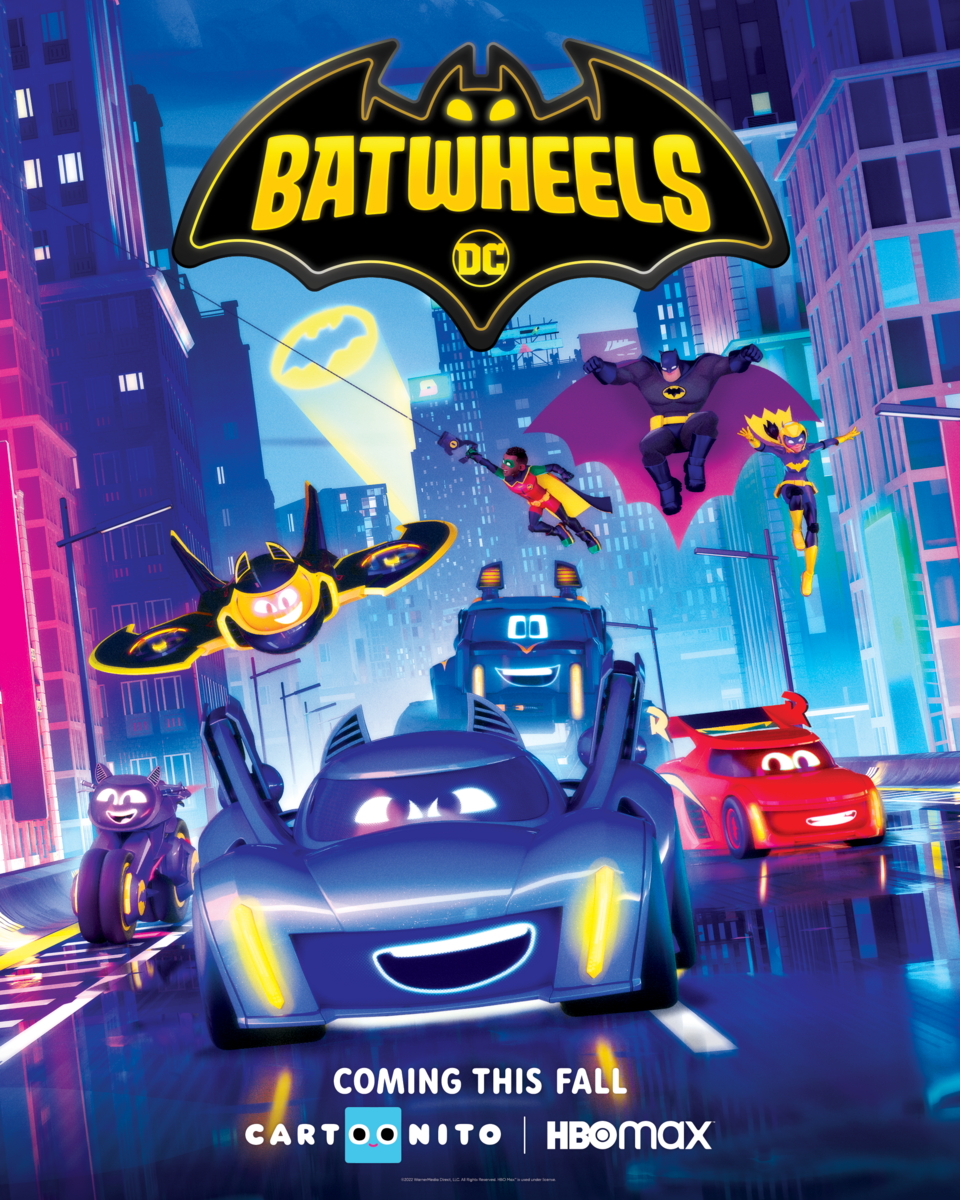 The villains will go bumper-to-bumper against the heroes of Batwheels voiced by the previously announced cast led by Ethan Hawke (as Batman), Jacob Bertrand (as Bam the Batmobile), and AJ Hudson (as Duke Thomas/Robin). Produced by Warner Bros. Animation, the series will race onto Cartoonito on HBO Max and Cartoon Network this fall.

The evil counterpart to the heroic Batwheels, the Legion of Zoom is a team of sentient vehicles brought to computerized life by Badcomputer, the new ultimate computer of the DC Universe. They, like the Batwheels, are essentially kids with little to no life experience. However, unlike the Batwheels, “The Zooms” are under Badcomputer’s malevolent guidance and often don’t make the best decisions. Prank, the Jokermobile, and the rest of the villainous squad wreak havoc on Gotham City alongside The Joker, Catwoman, Harley Quinn, and more of the Caped Crusader’s infamous rogues gallery.

The Legion of Zoom

Griffin Burns (The Addams Family 2) as Prank—The Joker’s favorite ride, Prank is tricked out with all manner of pernicious pranks – confetti cannons, a joy buzzer, and the like. Prank is often more interested in having a good laugh at someone’s expense than carrying out a plan.

Alexandra Novelle as Jetstah— Harley Quinn’s souped-up ATV, Jetstah displays all of the same obnoxious irreverence as her owner, along with an even bigger, badder giant mallet! Jetstah is full of tricks and loves to mock and tease the Batwheels as they chase her through the streets of Gotham City.

Josey Montana McCoy (Genshin Impact) as Quizz – Like his owner, The Riddler’s helicopter loves to befuddle the Batwheels with riddles, but unlike The Riddler’s, his riddles don’t always make sense. Quizz has the ability to skywrite them, broadcast them, and even drop parachuted riddle leaflets from above. As the youngest of the Zooms, Quizz is prone to throwing tantrums, especially when no one can figure out his riddles, even when they’re “sooooooo obvious!”

Ariyan Kassam (Great Pretender) as Ducky – The Penguin’s vehicle is an amphibious duck boat. Ducky can travel on land or sea, and is equipped with an array of sneaky surprises like umbrella shields and a squid-ink sprayer. He is a bit of a snob like his owner, and doesn’t always get along with the rest of the Zooms.

Xolo Maridueña (Cobri Kai) as Snowy – Mr. Freeze’s snowcrawler is armed with snow blowers and icicle missiles that can freeze opponents in their tracks. But due to his big, clumsy treads, Snowy is the slowest of the Zooms, often lagging behind and becoming the object of derision. Because of the way he’s treated by his teammates, he sometimes thinks about swapping sides and joining the Batwheels, though he would never admit that to the other Zooms.

SungWon Cho as Badcomputer – Badcomputer will not rest until he reigns supreme as the most advance computer intelligence in Gotham City—a title threatened by the hyper-advanced Batcomputer. As a being of refined intellect, Badcomputer holds little patience for the humbling antics of the Legion of Zoom, but fueled by his unrelenting jealousy of Batcomputer’s impressive hardware, he’ll have to settle for the tools he has at his disposal. It’s hard to get good help these days…

Tom Kenny (Spongebob Squarepants) as Crash – Badcomputer’s robotic minion, Crash is a begrudgingly obedient test dummy tasked with assisting Badcomputer’s evil schemes. Despite being constantly blown to bits (often accompanied by his signature snark and quick wit), Crash is a powerful adversary who can hold his own against the Batwheels.

Gina Rodriguez (Jane the Virgin) as Catwoman – The sneakiest of our Super-Villains, Catwoman loves to utilize her stealth and cunning to get her claws on the shiniest of trinkets and baubles Gotham City has to offer. Though she prefers to work alone, Catwoman is no stranger to playing both sides—good or bad—in order toget what she wants.

Mick Wingert (What If?) as The Joker—The ultimate prankster, all The Joker wants is to make everyone laugh…No matter how far he needs to go! The Joker revels in pushing Batman’s buttons, and if it means he can sneak off with a few bundles of cash from the bank in the process, even better! The Joker rarely takes anything seriously, but nothing makes his blood boil quite like getting burned by Batman.

Chandni Parekh (Big Nate) as Harley Quinn—Harley Quinn is the hyper kid on the block with no boundaries. She’s all about fun all the time—and what’s more fun than dunking on Batman? Nothing! Harley’s got a penchant for fast-paced heists and daredevil antics. Watch out for that mallet!

SungWon Cho as The Riddler—The Riddler would probably be respected for his quick wit and clever mind if he weren’t such a nagging know-it-all! He’s a super-nerd that thinks he’s the smartest person in Gotham City, and he’s on a personal mission to make everyone know it.

Jess Harnell (Animaniacs) as Penguin – A villain with a bottomless appetite for more, more, more! Penguin is the spoiled man-child of the bunch, always wanting to have the biggest, most ambitious schemes and heists. But with his mega-inflated ego, Penguin is also prone to throwng mega-tantrums when things don’t go his way. He’ll stop at nothing to get things his way—even if it means throwing his fellow Super-Villains under the bus.

Regi Davis (Mindhunter) as Mr. Freeze– A grouch and a grinch, Mr. Freeze is the ultimate downer who always seems to wake up on the wrong side of the bed. Just about everything (especially fun, ugh!) annoys his peevish popsicle—so he sees it as his personal mission to ice over Gotham City to make things nice and quiet. You don’t want to end up on the wrong side of his ice cannon (of his signature ice-based puns).

James Arnold Taylor (Star Wars: The Clone Wars & Rebels) as Toyman—Toyman loves nothing but playing with the latest and greatest toys—the only problem is, his idea of “toys” increasingly seems to encompass volatile high-technology. All he wants to do is play in peace, but that pesky Batman keeps ruining his playdates. He might be a bit of a choking hazard for the Caped Crusader.

They are a team of incredible crimefighters who have banded together to oppose evil, combat crime and clean up the streets of Gotham City. They are…okay, they’re NOT Batman and Robin. They’re the Batwheels – an awesome group of sentient super-powered crime-fighting vehicles defending Gotham City alongside Batman, Robin, Batgirl and a host of DC Super Heroes.

Having just been created by the Batcomputer, our heroes are essentially kids with little to no life experience. Led by Bam (The Batmobile), the Batwheels – Bibi (The Batgirl Cycle), Redbird (Robin’s Sports Car), The Batwing and Buff (The Bat Truck) – must navigate the growing pains of being a newly formed super team as well as the growing pains that come with just being a kid. This relatable and aspirational series will follow the journey of this dynamic team as they thrill and entertain with their heroic adventures as well as demonstrate to kids the value of self-confidence, friendship and teamwork.