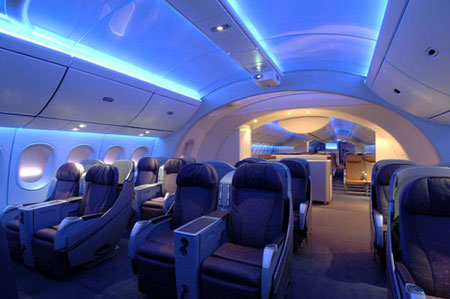 Following its first international landing back in April 2012, the new Boeing 787 Dreamliner landed at Chicago’s O’Hare airport on Sunday, November 4, 2012 markings its first domestic flight. According to the Chicago Sun-Times, the plane landed about 15 minutes early. United has ordered 50 of the state-of-the-art Dreamliners (two have shipped so far) to run routes including Houston, Cleveland, Denver, Los Angeles, Newark, San Francisco, and Washington.  The 787 Dreamliner is truly state-of-the-art with many innovations introduced to promote efficiency and passenger comfort.

The Boeing 787 Dreamliner is a long-range, mid-size, wide-body, twin-engine jet liner. It seats 210-290 passengers and is the company’s most fuel efficient airliner and the world’s first to use composite materials for most of its construction (80% composite, 20% aluminum, 15% titanium, 10% steel, 5% other). The fuselage is assembled in one-piece composite barrel sections instead of multiple aluminum panels bolted together with 50,000 fasteners. Aluminum is used primarily on the leading edges of the wings and tail. Titanium is used mainly on engines and fasteners.

The plane features raked wingtips and engine nacelles with noise-reducing serrated edges. It is capable of flying up to 8,500 nautical miles (enough to fly from New York City to Hong Kong) at a cruising airspeed of Mach .85 (561 mph).

Much of the hydraloic systems found in traditional airplanes have been eliminated and replaced with a new electrical architecture. The flight deck features LCD multi-function displays with two heads-up displays (HUDs). Two different engine models are available – a Rolls-Royce Trent 1000 or General Electric GEnx engine, designed in such a manner that engine swaps take 24 hours or less.

Seat rows consist of 4-6 abreast in First Class and 8-9 abreast in economy sections. The composite materials used allow for larger windows without the need for structural reinforcement. Windows feature electrochromatic auto-dimming (smart glass) instead of window shades. The 787 cabin uses LEDs allowing the aircraft to be entirely bulbless. Cabin pressure is maintained at the equivalent of 6,000 feet rather than the traditional 8,000 feet making it more comfortable for passengers. A/C systems improve air quality by removing ozone from outside air and using filtration systems to remove viruses, bacteria, and allergens.

Check out our Boeing 787 Dreamliner photo pictorial below.