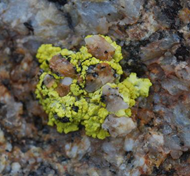 Scientists at the European Geosciences Union meeting reported that Lichen collected from Antarctica were placed inside Germany’s Mars Simulation Laboratory for 34 days where they were subjected to the same conditions they would experience on the Martian surface – same atmospheric, temperature, radiation, and pressure conditions. They survived.

“They adapted to the artificial Martian environment and demonstrated the same activity that they would in their natural environment.”

The lichen survived best in small cracks in rocks and gaps in the simulated Martian soil leading scientists to note:

“If life arose on Mars four billion years ago, it could have remained to the present day in these niches.”

The scientists also warned that we must be extremely careful not to transport any terrestrial life forms to Mars that might contaminate the planet.

But according to Michael Mautner, Research Professor of Chemistry at Virginia Commonwealth University:

“We have a moral obligation to plan for the propagation of life, and even the transfer of human life to other solar systems which can be transformed via microbial activity, thereby preparing these worlds to develop and sustain complex life. Securing that future for life can give our human existence a cosmic purpose.”