The $2.5 billion dollar, nuclear powered Mars Curiosity Rover is not autonomous.  On Earth, NASA engineers manually drive the robot around the surface of Mars.  If you are picturing a NASA geek, red hand clinched tightly around a joystick, with a ear-to-ear grin – you’d only be partially correct.

Driving Curiosity is not done in real time.  NASA engineers plan where to send Curiosity during the night and send those instructions to the rover as the Mars day breaks.  Then they go home and await for Curiosity to reply with computer data confirming the drive plan (which is sent back daily precisely at 4:00 PM Mars time).  Scientists immediately begin analyzing the data, which includes pictures taken by Curiosity, and plan for the next day’s romp around the red planet’s surface.  During the beginning of the project they drive no more than 30 feet a day but by the end, they drive up to 100 yards per day.  It may take hundreds of lines of code for one day’s worth of driving instructions and NASA drivers have to be very careful that the coded instructions they send Curiosity do not put the rover in harm’s way.  A tantalizing rock only a few feet away can trigger a drool reflex with NASA geeks and that can lead to disaster if they do not carefully design and program the route Curiosity is to take.

Vandi Tompkins, one of the Mars Curiosity Rover drivers explained to the New York Times:

You have to try not to think about what’s happening out there, which is, of course, completely impossible.  The rover may be executing a successful drive based on your instructions, or you may have just sent a national asset over a cliff.

At any given time there may be six or so Curiosity drivers working on the rover’s navigation.  A supervisor creates the drivers’ work schedules while taking into consideration each of the driver’s specialties (arm manipulation, turret movement, etc.).  Then the NASA rockstars take their work schedules and report to work at their assigned time just like any other Joe. 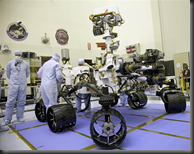 At the beginning of the project, the drivers must work on Mars time which can create havoc with their sleep patterns.  The Martian day (a Sol) is 39 minutes and 35 seconds longer than an Earth day.  That means if you began work at 8:00 AM Earth time on day one, the next day you would report to work at 8:39 AM (and get off at 5:39 PM).  As you can see, morning on earth quickly becomes night on Mars within a couple of weeks which is equivalent to moving two time zones to the west every three days. Yes, they get very tired.

I’m kind of so sleep-deprived at this point that I’m beyond the point where caffeine helps.

Sleep deprived Curiosity drivers carefully crafting instructions to send a $2.5 billion dollar asset around a planet millions of miles away.  Scary thought and indeed the job has its terrifying moments.  One driver recalls a harrowing moment he experienced with the Opportunity rover (another Mars rover that landed on the red planet in 2004).  Spotting an interesting anomaly that the NASA engineers wanted to study further, the team sent Opportunity instructions to back up about three feet.  Opportunity correctly understood that its masters wanted it to return to a spot about three feet behind it.  The engineer explains what happened next:

Instead of simply backing up, it decided to drive around the entire planet to get there.

Luckily pre-programmed safety functions triggered automatically and stopped the robot from taking a casual tour around the entire planet.  But just think of the data they would have collected…