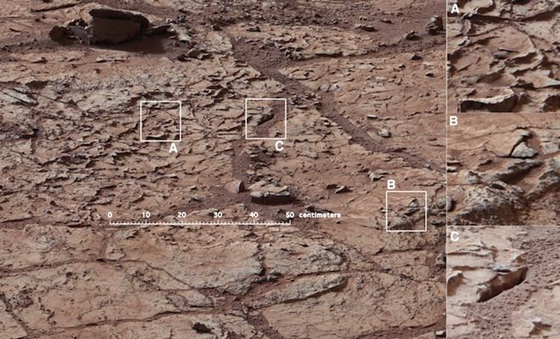 No spacecraft has ever penetrated the rocky surface of Mars, or any planet for that matter, but that is about to change. In the past few weeks, Curiosity Rover has been stationed in a region called Yellowknife Bay, which features fractured ground with different temperature swings compared to other nearby terrain – and plenty of evidence of flowing water. The rover’s suite of  instruments has been doing the initial reconnaissance, including several laser blasts with the ChemCam spectrometer. ChemCam has been seeing signs of possible gypsum, or other hydrated calcium sulfates. Some of the minerals found are sedimentary which means there was likely water in the fractures at some point in time. Drilling into them will provide more answers.  Curiosity will spin its drill bit for the first time in about two weeks.

At Yellowknife Bay, the rover’s cameras have also spotted veins, blueberry-like nodules, layers and even a rare “Martian flower,” which is actually just a shiny pebble embedded in sandstone. The zone where Curiosity will drill has been dubbed “John Klein,” for a deputy project manager who died in 2011.

The next step will be for Curiosity to drill 5 millimeters into the rocks and veins to determine their composition and look for aqueous minerals.  NASA says this step is the most significant engineering task they’ve taken on since landing.