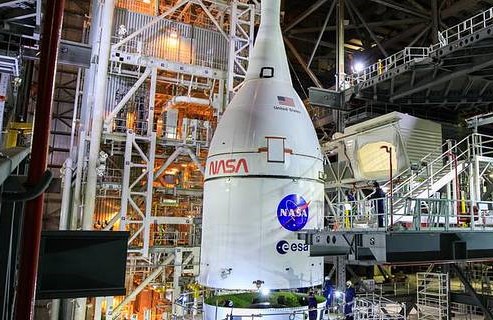 The long-delayed first step toward putting men back on the Moon will take place in February 2022. NASA officials announced a two-week period beginning February 12, for the Artemis 1 flight. There will be no astronauts aboard the Space Launch System. However, the Orion capsule, used to transport astronauts through space, will be included in the mission.

“It’s hard to put into words what this milestone means, not only to us here at Exploration Ground Systems, but to all the incredibly talented people who have worked so hard to help us get to this point. Our team has demonstrated tremendous dedication preparing for the launch of Artemis I. While there is still work to be done to get to launch, with continued integrated tests and Wet Dress Rehearsal, seeing the fully stacked SLS is certainly a reward for all of us.”

There will be a “dress rehearsal” in January preceding the February Launch. Two more launches will be scheduled for March and April, also without astronauts. The timing of all are based on the moon’s alignment with earth.

Ultimate, a future flight, Artemis-2, will carry a crew back to the Moon.

No humans have stepped on the moon since the Apollo 17 mission in 1972.