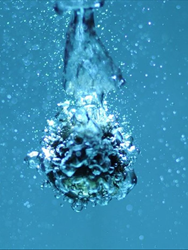 Researchers have discovered a way to boil water without producing any bubbles.  In 1756 the German scientist Johann Leidenfrost noted how water droplets skittered across the hot surface of a pan and theorized that the phenomena was due to a thin layer of vapor that formed between the water and pan surface.  The vapor is created when the temperate reaches the “Leidenfrost temperature” and acts as a cushion to the water droplet allowing it to stay intact rather than evaporating.  Scientist at Northwestern University figured if they could stabilize the Leidenfrost vapor film then boiling water would produce no bubbles when it reached 100 degrees Celsius.  Turns out they were right.

We manipulated what has been known for a long, long time by using the right kind of texture and chemistry to prevent bubbling during boiling.

Essentially what they did was coat little steel balls with various materials, then heated the steel balls, and dropped them in water. They discovered a specific substance and texture that created a very stable Leidenfrost vapor layer around the hot steel ball and hence, no bubbles were created when it was dropped into the water.

In their experiments, the stabilization of the Leidenfrost vapor film was achieved by making the surface of tiny steel spheres very water-repellant. The spheres were sprayed with a commercially available hydrophobic coating — essentially self-assembled nanoparticles — combined with other water-hating chemicals to achieve the right amount of roughness and water repellency. At the correct length scale this coating created a surface texture full of tiny peaks and valleys.  When the steel spheres were heated to 400 degrees Celsius and dropped into room temperature water, water vapors formed in the valleys of the textured surface, creating a stable Leidenfrost vapor film that did not collapse once the spheres cooled to the temperature of boiling water. In the experiments, researchers completely avoided the bubbly phase of boiling.

The potential applications go beyond splatter-free pots and pans.  For one thing, these new superhydrophobic surfaces transfer heat from the source much more efficiently.  In addition, the unique characteristics of the new surface material could allow it to be used to create self-cleaning layers on buildings and cars or used to coat power lines and other wires to reduce frost and ice buildup.