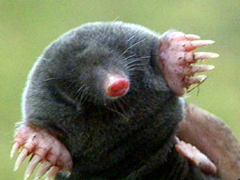 Almost all mammals hear in stereo, the benefit of having two opposing ear canals, but scientists have long debated whether some animals smell in stereo.  Animals’ unique ability to find food based on odor is uncanny at times and now neuroscientist Kenneth Catania of Vanderbilt University has determined that moles at least, do indeed smell in stereo.  “The fact that moles use stereo odor cues to locate food suggests other mammals that rely heavily on their sense of smell, like dogs and pigs, might also have this ability.”

At first Catania thought the moles’ nostrils were too close together to detect odors in different amounts.  NBC News explains how Catania figured out that the moles smelled in stereo:

“Catania placed a mole in the middle of a semicircular arena with food (bits of earthworm) placed at particular locations around its perimeter. The arena was in a sealed container, and by noting the change in air pressure, Catania was able to detect when the mole sniffed.  The moles found the food morsels in fewer than five seconds and went straight to the correct location every time, Catania said. He noticed that the moles would follow the same pattern: One would enter the chamber, move its nose back and forth while sniffing, hone in on the food, and go directly toward it.  Next, Catania blocked one of the moles’ nostrils with a small plastic tube. When a mole’s left nostril was blocked, its path skewed toward the right, and when its right nostril was blocked, its path bent toward the left. The moles were still able to find the food, but it took much longer.  Then Catania put the moles in a chamber where the food was always directly across from the entrance. Moles with both nostrils unblocked went straight toward the food, but when one nostril was blocked, the moles again veered to the opposite side.  In another experiment, Catania put a hollow plastic tube in both of the moles’ nostrils and crossed them, so that each nostril sniffed air from the opposite side of the animal. This time, the moles sniffed around and often couldn’t find the food at all.”

It has long been known that sharks also smell in stereo but if humans possess the ability, it appears to be very weak.