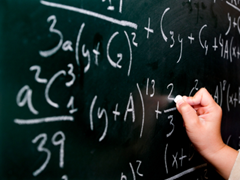 It was announced yesterday that a new prime number, the largest to date, has been discovered  by Dr. Curtis Cooper, a professor at the University of Central Missouri.  The new prime number, which is also the 48th Mersenne prime (an extremely rare prime that is a prime number that can be written in the form Mp = 2n-1), is 257,885,161-1.  The 48th Mersenne prime was discovered as part of the Great Internet Mersenne Prime Search (GIMPS), a project that has used volunteer computers to calculate and search for primes for 17 years.  Dr. Cooper’s computer took 39 days of continuous calculation to verify the prime status of the number, which has over 17 million digits and was discovered January 25.  The discovery was verified independently by a 32-core server that took 6 days running MLucas software to confirm; a CUDALucas software running on an Nvidia GTX 560 Ti that took 7.7 days; and the GIMPS software on an Intel Core i7 CPU that took 4.5 days. If the 17 million digits were written out, they would fill approximately 28 novel-length books.